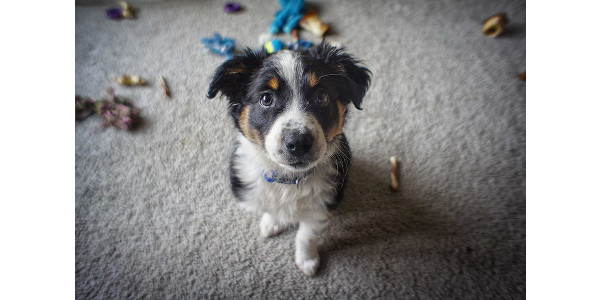 May we not get overwhelmed this holiday season with events that might appear to alter the holidays. (Ted Van Pelt via Flickr)

MANHATTAN, Kan. — The countdown for Christmas officially has begun in our house. This year, aside from a little felt Advent calendar we hang on a door to help the kids understand how many days are left until Christmas, we also added two chocolate Advent calendars — one for my son and one for my daughter. We figured it’d be easier to maintain the peace by giving them each their own calendar and allow them to enjoy their own candy each day as we prepare for Christmas.

Our farm dog Rosie is a whip-smart Australian Shepherd. She’s a good dog, but sometimes she can get herself into some interesting situations.

My daughter and I recently came home to find Rosie had let herself into the house after my son and husband had walked out to a nearby shed. They had left the backdoor open and Rosie seized the opportunity to go inside.

As my daughter and I opened the door, Rosie happily greeted us. I immediately wondered what she had gotten into this time. Because when Rosie gets into the house and is unattended, she can get herself into some trouble.

In the past, she has rummaged through my daughter’s room and taken stuffed animals to claim as her own. She has picked up my son’s dirty socks and added them to her collection. She has devoured loaves of bread and destroyed the bags, leaving the evidence scattered throughout the house. She has shredded cereal boxes and eaten all of the contents. Afterward she’ll either let herself out the door she came in or takes a break and relaxes on the couch until her humans arrive to discover the path of destruction she has created.

This time Rosie had found the trashcan. As I was cleaning up that mess in the kitchen, my daughter yelled from the living room, “Christmas is ruined!”

Rosie had discovered my daughter’s chocolate Advent calendar and then thoroughly destroyed it and ate the vast majority of its contents.

As I was trying to calm my hysterical 4-year-old who had now decided that Rosie’s act had not just ruined Christmas but officially canceled it, the boys returned home.

My son helped pick up the cardboard and plastic pieces and then came into the kitchen to reassure his little sister that everything would be OK, and Christmas would indeed still happen. He then brought his untouched calendar over to his sniffling little sister, opened his paper door, took out the small piece of chocolate, carefully bit it in half and offered it to his sister.

As my 4- and 7-year-old sat side by side, slowly eating their tiny pieces of chocolate, I couldn’t help but think that this was a profound moment on my son’s part. He recognized that his sister — who loves candy — would not be able to enjoy her chocolate because she no longer had any. He recognized that he had something that he could share, and he took action to ensure his sister could still experience the anticipation of Christmas.

May we not get overwhelmed this holiday season with events that might appear to alter the holidays. And may we recognize times where we can all provide loving acts that illustrate the spirit of giving.