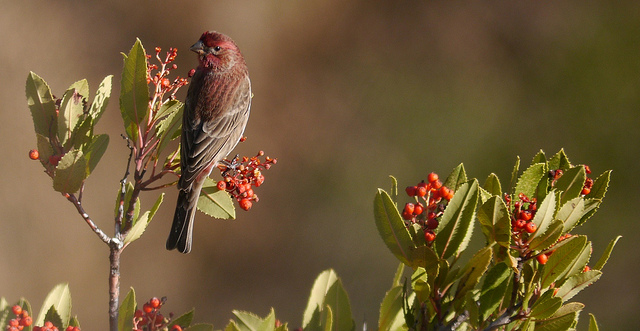 Birds flock to a large shrub called toyon, with white flowers in the summer, fall and spring, to nibble on its red berries. (Derell Licht, Flickr/Creative Commons)

Birds flock to a large shrub called toyon, with white flowers in the summer, fall and spring, to nibble on its red berries. Bees descend on towering matilija poppies, whose large white and yellow flowers bloom in late spring. Butterflies love fragrant coyote mint, an herb with nectar-filled lavender flowers.

For the 75-year-old Gottlieb, an environmentalist, philanthropist and nature photographer, the garden has been a labour of love for nearly 30 years. A new book, “The Gottlieb Garden: A California Love Story” (National Wildlife Federation, 2016), written by Mallory Smith and featuring more than 120 photographs by Gottlieb, captures the garden’s essence.

“Native plants are so incredibly important for wildlife and insects, which are the base of everything,” Gottlieb said in an interview. “Most people, in the early ’90s, I found, had no clue what a native plant was, and drought-tolerant plants weren’t on the menu either. When I began the garden, I was a rank amateur. I’ve learned a lot.”

According to the Theodore Payne Foundation for Wild Flowers and Native Plants, a non-profit in Sun Valley, California, native plants not only thrive in local climates, but they provide food and shelter for native animals and also save water.

Yet native plants are not the same as drought-tolerant plants, Gottlieb stressed.

Her garden is on the Theodore Payne Foundation’s annual home tour of native plant gardens, and all profits from the book go to the foundation and other environmental groups. When the tour started more than a decade ago, 20 people came to see her garden; in 2016, hundreds filed through in a day, Gottlieb said.

The foundation’s executive director, Kitty Connolly, called the Gottlieb Garden “an inspiration for all gardeners. Susan’s skilful use of native plants shows how gardening can enrich our cities, support native wildlife and forge a strong connection with our natural heritage.”

Originally from a small mining town in Canada, Gottlieb grew up with water and nature conservation in mind from a young age. She later moved to California, worked as a nurse in San Francisco and Los Angeles, and met her husband, Dan Gottlieb, in 1984. Trips to California’s Death Valley and concern that lakes such as Owens Lake and Mono Lake would become dry because of Los Angeles’ need for water led her to create a water-saving home oasis.

She ripped out the moisture-guzzling ivy growing around her Beverly Hills home and replaced it first with drought-tolerant plants, then native plants. Dan and Susan Gottlieb also own the G2 Gallery, a nature and wildlife photo gallery in LA.

“Where I grew up, we hauled water to our home from the well, and electricity was expensive,” she said. “It always bothered me that we use so much water here in Southern California.”

Some of Gottlieb’s favourite plants in her garden include the perennial, purple-flowering herb verbena and tall, green, pod-bearing mesquite trees. She loves sweet-smelling California lilac, a low-growing shrub whose spring flowers go from white to dark blue.

For those wanting to create a garden with native plants, Gottlieb suggested starting off simple and small.

“Don’t get overwhelmed, and don’t do it all at one time,” she said. “I did it a bit at a time with my garden, and that’s why it’s taken me 30 years. Take gardening classes. California plants go dormant in the summer, and Eastern plants tend to go to dormant in the winter. It’s good if you can find a gardening class specific to the native plants in your area.”