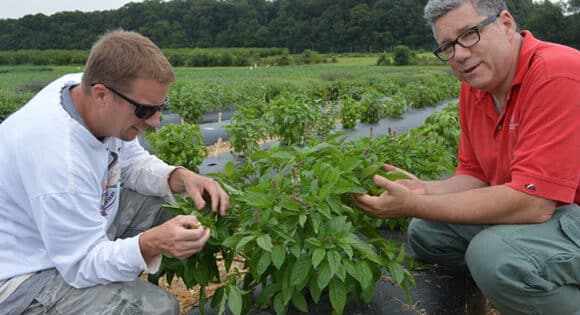 Sweet basil used to be considered a relatively easy fresh market culinary herb crop to grow. Growers saw it as a popular and profitable enterprise. When sweet basil was later hit by Fusarium wilt, conventional growers were able to turn to fumigation, while organic growers were able to turn to emerging resistant varieties. (photo by Rutgers University )

To a lesser extent, growers have had issues with Japanese beetles and even bacterial leaf spot. But in general, available controls existed and these problems were sporadic. Growers have always had issues with weeds. Yet with good management, coupled with an array of control options for insects and weeds, all pests could still be managed and managed economically.

Such difficulties impact all crops, and growers have navigated around each challenge with innovation, creativity, and tenacity.

Then the unexpected happened: farms discovered basil downy mildew (BDM) in the U.S. in Florida during the fall of 2007. And it devastated commercial sweet basil crops. BDM rapidly led to significant crop loss.

A New Crisis- A New Disease, No Genetic Resistance and Few Control Options
While downy mildew is a well-known disease that impacts a wide variety of vegetables and fruits, including lettuce, spinach, cucurbits, and grapes, it had never before impacted basil in the U.S.

By 2009, BDM had spread to many of the states on the East Coast and in the Midwest. By 2015, it spread to most sweet basil growing parts of the country. Growers, the commercial herb industry, as well as the research community, were not prepared.

We first reported on the downy mildew wars in American Vegetable Grower in 2010. We highlighted the disease, its symptomology on sweet basil, and offered a creative early monitoring program. It’s one that Cornell established to determine where and when BDM was occurring in the U.S. and to follow its movement.

That is now being done with a map-based program. Growers and gardeners alike have been able to report BDM on these sites when the disease reached their area from the southern states where it first appears each year to states further north over the growing season.

In parallel, our early work at Rutgers University determined that all the sweet basils (Ocimum basilicum) were highly susceptible, while other basil species within the genus, such as O. xcitriodorum and O. americanum, were less susceptible or resistant to this pathogen and many other O. spp of exotic basils appeared immune or resistant.

In response, Rutgers began an intensive plant-breeding program to develop BDM resistant lines by first identifying sources of resistance that could be incorporated into commercial sweet basil.

In 2011, with funding from a USDA grant program, Rutgers University and collaborators at Cornell University (at the Long Island Horticulture Research & Extension Center), UMass – Amherst, and the University of Florida (at the Belle Glade Everglades Research and Education Center) started a holistic program to provide solutions to growers.

This included a genetic resistance-breeding program coupled with multi-state evaluation of potential organic and conventional fungicide products for BDM control, an effort spearheaded by all three universities. The results observed where then shared with commercial growers and buyers around the country.

By 2015, Rutgers researchers reported that you can breed for BDM resistance. They identified a heritable form of genetic resistance to BDM that could be introduced into a commercial sweet basil variety. At the same time an increasing number of commercial products showed some degree of efficacy in controlling or reducing BDM were also approved and available to the commercial industry to use, each providing hope to growers and the industry.

The Basil Downy Mildew Pathogen
The exact host range of Peronospora belbahrii, the fungal-like pathogen responsible for BDM, across the mint (Lamiaceae) family is still unknown. There are 60 species of Ocimum (the genus of basil) and over 230 genera within the Lamiaceae or mint family (including coleus, catnip, mint, oregano, rosemary, sage, and thyme) that could be susceptible.

While more research and evidence are needed to determine the definitive mode(s) of transmission and spread, what is clear is that the pathogen spreads rapidly if present when environmental conditions are favorable.

The pathogen can be detected on basil seeds by methods such as real-time PCR. But this test does not distinguish between living and dead pathogen associated with seed, so pathologists need new methods to determine if seed is harboring viable pathogen. The pathogen has been detected on seeds of BDM-resistant basils as well as susceptible varieties.

Basil seed cannot be treated with hot water to destroy the pathogen, because it exudes a gel when wet. However, there is at least one U.S. company (High Mowing Organic Seed) that has developed a proprietary method for steam treating seed. Yet it’s not known whether such a technology could work on sweet basil. Research is needed to document if this or other procedures can destroy the pathogen while maintaining seed viability.

Early work was and remains challenging. That’s because the resistance identified in the exotic basils are not easily transferred into sweet basil. The genetics systems between the different species are very different.

Those exotic basil species contain different chromosome numbers than sweet basil. As a result, there were cross-pollination barriers between exotic BDM-resistant germplasm and sweet basil. Some of the exotic basils (e.g., non-sweet basil types) showed immunity, others exhibited resistance to BDM. But the plants from these other species did not look, taste, or smell like sweet basil!

Early crosses often yielded progeny (i.e., seed) that were sterile and/or would not germinate. Some of those sterile hybrids held potential, but did not produce seed. Nor did they appear or taste as a traditional sweet basil.

As such, commercial growers would need to vegetatively propagate plants at an exceptional high cost.

We opted to focus on a path that would allow us to propagate downy-mildew resistant (DMR) basils from seed. After thousands of basil seedling were screened against BDM, Rutgers was able to identify a strong contender: one unusual O. basilicum variety, reported to have been collected in Zanzibar.

This variety, ‘Mrihani’ from Horizon Seeds (Oregon), appeared to be  (and was sold as) an ornamental basil with a licorice flavor, characteristic of some of the exotic basils which belong to other Ocimum species that are distinct from the sweet basil species (Ocimum basilicum).

However, the results of a phylogenetic study of the basil genus Ocimum that we conducted later demonstrated ‘Mrihani’ was actually a member of O. basilicum, despite its exotic appearance, taste, and aroma.

Given these results, we immediately used this as one of our parents. We were not surprised to find that ‘Mrihani’ could be crossed with commercial sweet basils, including Rutgers fusarium-wilt-resistant, inbred sweet basil breeding lines. We then proceeded to use as teh other parent

Light at the End of the Tunnel
Five years of subsequent field selection in New Jersey and Florida (winter nursery) resulted in a series of stable sweet basil varieties with a high level of resistance to P. belbahrii.

From this breeding program emerged 12 new sweet basils, with four of the new varieties commercialized by VDF Specialty Seeds in record breaking time:

Resistance has been verified across multiple U.S. locations by Rutgers University, USDA collaborators, and independently at the University of Hawaii and many other U.S. universities and growers, as well as abroad.

Importantly, these DMR varieties are resistant but not immune and, under heavy disease pressure, can show signs of BDM. These varieties offer meaningful DMR to growers who, until now, depended upon frequently applying targeted, conventional fungicides to achieve control.

Field growers have been able to harvest later into the season than has been possible since the occurrence of BDM. And they find the quality of the new basils meet consumer expectations.

The War Against BDM Continues
As new sweet basil varieties emerge on the marketplace, whether highly resistant or even immune, the BDM war is far from over. Lessons learned from downy mildew (DM) on other crops show that new races are likely to eventually evolve with the deployment of DMR varieties. As such, we anticipate that this DM pathogen will mutate over time and overcome resistance. Work continues at Rutgers, private seed companies, and other public plant breeding groups both here in the U.S. and abroad to identify additional sources of genetic resistance and increase the durability of DMR in sweet basil. Ongoing basic research at Rutgers and UMass-Amherst seeks to identify the genes conferring BDM resistance so that they may be efficiently deployed in future disease resistance breeding programs and accelerate DMR variety development.

Controlling Basil Downy Mildew When Growing Resistant Varieties
The DM pathogen has the potential to evolve relatively quickly with the emergence of the sexual oospore, which has been reported in infected basil leaves in Italy and Israel.

Oospores increase the durability of the pathogen, allowing it to overwinter and potentially overcome chemical and genetic control. Work from Israel has provided initial evidence for mefenoxam-resistant BDM races. To mitigate this threat, organic and conventional growers should always use an integrated management program by applying fungicides in combination with resistant varieties and follow fungicide resistance management guidelines.

In the 2019 field season, the IR-4 Project, in cooperation with Agriculture & Agri-Food Canada, began conducting residue and efficacy/crop safety studies with the new active ingredient picarbutrazox (FRAC Code U17) on basil for field and greenhouse use.

The IR-4 Project also began testing select biopesticides for efficacy and crop safety in 2019. That includes various experimental products on the Rutgers DMR sweet basil varieties. The hope is to develop a fungicide program for organic growers.

Two main factors makes it possible for growers to battle this devastating disease. The first? The Rutgers University DMR sweet basil lines (and others now commercially available). And the other? The IR-4 Project’s help in gaining important chemical registrations. Efforts continue to be underway to conduct studies (both efficacy/crop safety and residue), using new products so growers can continue to successfully alternate fungicides with different modes of action in their basil crop.

Fungicide efficacy studies conducted in New Jersey, New York, and Florida have shown that effective control can be obtained when conventional fungicides are applied on a regular schedule and start before disease onset.

Some situations can bring on failures:

To attain adequate control in the north, we recommend a weekly schedule. However, Florida-grown basil often needed twice-per-week applications.

Organic fungicides tested alone or in combination programs have not provided adequate control. This may in part be due to the fact that most are contact materials, necessitating that they be deposited directly on the underside of leaves when applied. That’s because they are unable to move through leaves as many conventional fungicides can do.

Results from research conducted in New York are posted on Cornell’s site.

In U.S. basil-growing areas with BDM year round, downy mildew management is even more challenging (such as in southern Florida, Texas, or California). Growers must guard against the disease without respite, due to the constant source of inoculum. In such instances, fungicide applications must begin at or immediately following plant emergence and continue on a rigorous schedule with no skips.

For greenhouse growers who produce sweet basil 12 months of the year, there are now a number of fungicide options that were not available previously. .

Rutgers new BDM resistant sweet basil varieties are currently being distributed/sold through VDF Specialty Seeds, based in Momence, IL, with other seed companies also carrying the seed in 2019. With these new resistant varieties, effective control appears to be possible with less frequent application of fungicide than with susceptible varieties, as documented in recent Florida trials.

To date, conventional product registrations obtained with the help of the IR-4 Project include:

Recent IR-4 Project biopesticide and organic efficacy work has focused on products containing a wide range of active ingredients including, but not limited to: