Home » A novel approach to save an endangered tree 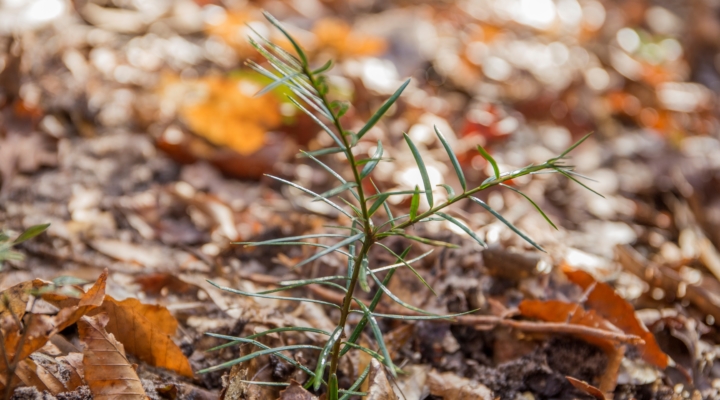 A newly planted young torreya tree. There are fewer than 1,000 left in the wild. (UF/IFAS photo by Camila Guillen)

GAINESVILLE, Fla. — With fewer than 1,000 of them left in the wild, the Florida torreya tree is on the path to extinction. But now scientists have a plan to save it.

Last month, scientists from universities, conservation groups and government agencies from across the country spent two days turning their best ideas for conserving this rare tree into a coordinated strategy.

Their novel approach could set the groundwork for conserving other endangered plants, said Jason Smith, associate professor of forest resources and conservation at the University of Florida, and one of the organizers of the event.

This first Torreya Tree of Life event was sponsored and co-organized by ProForest, an interdisciplinary and multi-institutional initiative focused on forest health headquartered at UF, and of which Smith is a part. This event featured preeminent evolutionary biologist E.O. Wilson, whose keynote address emphasizes the importance of conserving endangered species and sustaining global biodiversity.

“Dr. Wilson is a giant in the study of biodiversity, and in the science world in general. I think having him involved in this project has been instrumental in creating the network of scientists who are now a part of this project,” Smith said.

At one point during a hike in Torreya State Park, organizers planted a young torreya tree as a symbol of what they hope will be a second chance for the tree. The torreya’s numbers have sharply declined due to a fungal disease discovered by Smith and his team with the UF Institute of Food and Agricultural Sciences.

Later, participants broke off into four groups to hash out the plan to save the torreya.

Stakeholder outreach will focus on raising awareness among members of the public and directly engaging residents who live near or within the torreya habitat. Some landowners actually have torreya on their properties and are in position to become stewards of these natural areas.

Experts on the ecology of the torreya’s native range will examine which environmental conditions help torreya’s survive. Understanding which conditions are best could help scientists decide where to reintroduce trees in the future.

Large ex situ — off site — propagation programs for torreya exist at the Atlanta Botanical Garden, a sponsor of the event, and at other institutions. Ex situ propagation helps make sure that the torreya will survive as a species, even if it does disappear from its native habitat. This method also provides trees for scientists to study in the lab. These ex situ projects will complete a comprehensive survey to capture the genetic variance in their collections of torreya.

Finally, scientists will begin screening trees to look for those resistant to the fungus that’s so devastated the species. Scientists will then determine which genes in these resistant trees make them more resilient. If they can identify this genetic component, the gene editing technology CRISPR can be used to produce trees that have these traits, Smith said.

“When funded, this holistic strategy, involving many scientists and institutions, could give us a fighting chance at saving the torreya. This isn’t typically how conservation is done, so we’re excited to be trying this novel approach,” Smith said. “With the rate at which genetic technologies are advancing, as well as the programs we already have in place, the goal is to have a method we can implement in the next three to five years.”