Subscribe
Home / National / A new ARS strawberry is a ‘Keepsake’ 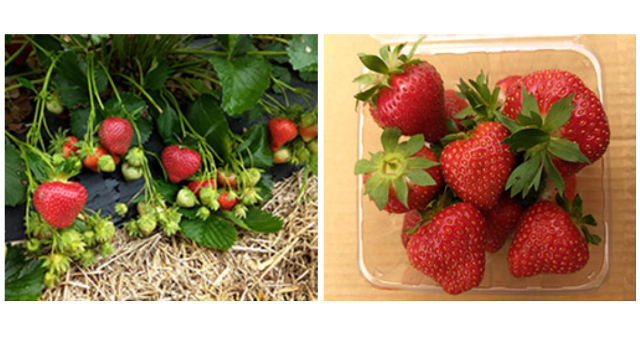 A new strawberry cultivar, Keepsake, is the first resulting from an increased effort by the Agricultural Research Service to develop strawberries with improved shelf life. (USDA ARS)

BELTSVILLE, Md. — A new strawberry cultivar, Keepsake, was released by the U.S. Department of Agriculture (USDA). ‘Keepsake’ is a midseason, spring-bearing, or short-day strawberry (Fragaria xananassa Duch ex Rozier). The new strawberry is the first resulting from an increased effort by the USDA Agricultural Research Service (ARS) at Beltsville, Maryland, to develop strawberries with improved shelf life.

Compared with other current strawberry cultivars and breeding selections evaluated after 2 weeks in cold storage, ‘Keepsake’ had a low proportion of degraded and decayed fruits. The proportion of fruits degraded at one week was 29 percent, lower than for all the other cultivars, including Chandler (81 percent) and Camarosa (93 percent). These fruits have outstanding flavor with very high soluble solids (sweetness) and moderate acidity (tartness). They also have a pleasing texture and are juicy when eaten. ‘Keepsake’ is very closely related to ‘Flavorfest’, a strawberry plant also developed by this project in 2012, which is available for purchase and popular with commercial growers in the Mid-Atlantic and Northeast.

‘Keepsake’ fruits are attractive with good size, color, gloss, and a showy calyx, or cap. They are firm and tough enough for handling during harvest and packaging. It is expected that this berry will perform well for growers in the Mid-Atlantic and Northeastern United States and adjacent areas.

Over nine years of testing, ‘Keepsake’s average total yield was 1.3 pounds/plant. This ranks ‘Keepsake’ yield as slightly less than ‘Flavorfest’ and ‘Allstar’, and greater than ‘Camarosa’ and ‘Chandler’. Like ‘Flavorfest’, ‘Allstar’ and ‘Earliglow’, ‘Keepsake’ is resistant to anthracnose fruit rot, one of the most serious fruit rots world-wide.  With no fumigation or fungicides in annual plasticulture at Beltsville, MD. ‘Keepsake’ total fruit rot decay was 14 percent, similar to that of ‘Flavorfest’ and lower than that of ‘Chandler’ at 16 percent.

‘Keepsake’ was approved for release in 2018, and licensing information can be obtained through the USDA-ARS Office of Technology Transfer. This strawberry cultivar was increased for distribution by Lassen Canyon Nursery, Redding, CA.