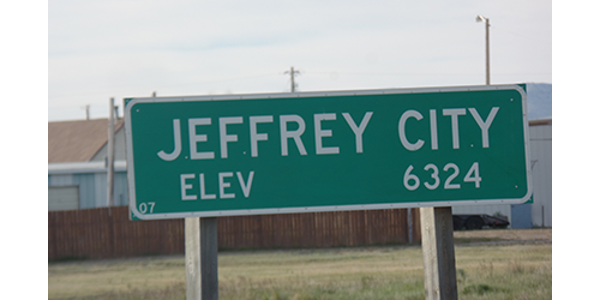 Jeffrey City is located in Freemont County Wyoming, on highway 287 about 90 plus miles west of Casper and about 60 plus miles east of Lander. (Courtesy of SDSU Extension)

BROOKINGS, S.D. — A boomtown is a community that experiences rapid population and economic growth; very often it is in conjunction with a new profitable industry. There are over 50 such communities within the United States and Jeffrey City, Wyoming is one of these communities. Jeffrey City is located in Freemont County Wyoming, on highway 287 about 90 plus miles west of Casper and about 60 plus miles east of Lander. I recently had an opportunity to spend some time Jeffrey City. Here are the pictures and the story of Jeffrey City Wyoming a mining boomtown gone bust.

The area was settled by three World War I veterans, in the 1930’s, who moved their families onto new homesteads. One of these families, Sam and Beulah Peterson gave up farming in 1939 to run a gas station on the newly constructed highway that passed through their property. By the 1940’s Beulah had begun to handle mail for the local ranchers. In the early 1950’s Beulah applied for and received a post office, which she named “Home on the Range”.

Bob Adams discovered uranium in the hills close by “Home on the Range” in 1954. The next year (1955) he started the Lost Creek Oil and Uranium Company. By 1957 Bob had secured an U.S. Atomic Energy Commission contract to mine and supply uranium to the U.S. Government. This contract required that the company supply housing for its workers (Amundson 1995). The lost Creek Oil and Uranium Company began planning and building a trailer town near the “Home on the Range” post office.

The name given to his new community was Jeffrey City in honor of Dr. Charles W. Jeffrey who was a wealthy doctor from Rawlins that helped finance the costs for prospector and businessman Bob Adams. In May of 1957 Bob changed the name of his company to Western Nuclear Corporation (WNC). By the end of 1958, Western Nuclear Corporation received a new contract from the U.S. Atomic Energy Commission that doubled its uranium milling capacity.

As the uranium mining boom continued Jeffrey City became a community, not just a trailer town for mine workers. By the late 1970’s Jeffrey City had become a real community where people could live and work; there was an emergency medical clinic, library, sheriff and two deputies, Lions Club, Masons, Boy Scouts, school board, seven churches, several restaurants, financial institutions, local newspaper, motel, Montgomery Ward, laundry service and three gas stations. The streets were paved and WNC had donated land to build a new school gymnasium. Jeffrey City was building towards a future.

Then the uranium mining bubble burst (1979)…The Three Mile Island accident happened, the Nuclear Regulatory Commission created new requirements that forced utility companies to retrofit existing nuclear plants and put plans for new nuclear power plants on hold. The demand for uranium dropped. Jeffrey City felt these effects immediately. Western Nuclear Corporation laid off 118 workers in 1980 (Amundson 1995). In June of 1981 WNC laid off another 244 employees. By the end of 1982 the WNC workforce was down to 47.

It is the numbers that tell the real story…at about the peak of the uranium industry in Jeffrey City there were approximately 1,000 people employed by the uranium mine. The community’s population was over 4,000 and the school had close to 600 students. By 1982 the community had lost 95% of its workforce population, taking 66% of the school age children. In 1995 the population of Jeffrey City was less than 100 people and there were 33 students enrolled in school. The population in Jeffrey City according to the 2010 US census data was 58; the high school built in the early 1980’s is closed for lack of activity.

Jeffrey City, takes its place in history as one of Americas’ boomtowns, its rise and fall shares common themes with other one-industry towns (Amundson 1995). It is hard for a community to exist when it solely relies on a boom-bust industry. Jeffrey City may have been doomed from the beginning because its extractive economy was not regenerative or sustainable.

As of last week Friday, June 16, 2017, there are 50 people who call Jeffrey City home. In May of 2017 there were 8 students who attend the K-5 elementary school in town. On May 27 of this year the Jeffrey City Elementary School held a “ride your horse to school.” There is also a volunteer fire department.