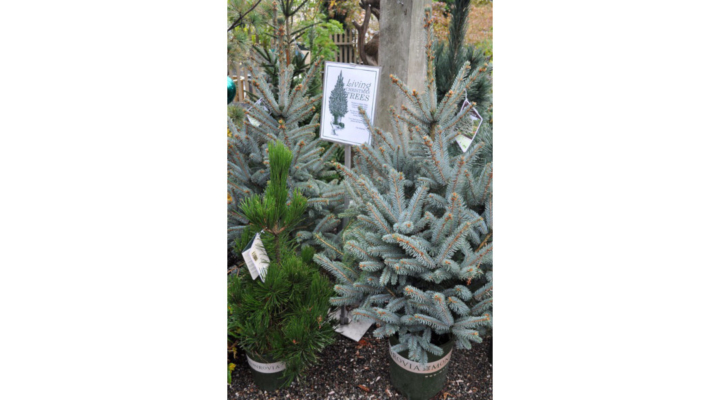 A living Christmas tree is an option for homeowners who would rather not throw their tree away. It's usually sold with the root ball secured in a burlap sack or as a potted tree that can be planted later. (The Greenery Nursery and Garden Shop, Flickr/Creative Commons)

A living Christmas tree is an option for homeowners who would rather not throw their tree away. It’s usually sold with the root ball secured in a burlap sack or as a potted tree that can be planted later. It should go without saying, but note that you don’t go cut down a tree at the choose-and-cut Christmas tree farm and stick it in the ground after the holidays in hopes that it will develop roots!

Michael Dana, professor of horticulture at Purdue University, said, “A living tree costs more than a cut tree and the survival of the tree is seldom guaranteed because it’s not sold at a normal transplanting time.”

There are other disadvantages to the living tree, and perhaps the hardest to overcome is the weight. A five- to six-foot tree including root ball and soil can weigh as much as 100 to 200 pounds. Just getting the tree through the door and into place can be daunting. Dana suggests a basket with handles or a cart or wagon to help with the moving process.

Dana said a live tree should remain inside for no longer than three to five days, and placed in a cool room that is free of hot or cold drafts. Of course, this short time period is too limiting for many families. The short time indoors keeps the buds dormant, a “must” if winterkill is to be avoided once the plant is moved outside. During the time the tree is indoors, the soil and root ball must not dry out. However, don’t let the tree stand in water. Keeping the soil moist involves placing the entire root ball in a tub and packing it with straw or peat moss.

Once the holidays are over, it’s time to plant the tree outside. There are several factors that will improve the likelihood that the tree will survive.

“It is best to provide a gradual transition for the tree from indoors to outdoors,” said Dana. “Let the tree spend a few days in a cool area protected from the wind, such as a garage, rather than abruptly planting it outdoors.” This is especially desirable if the weather is extremely cold and windy. The permanent home of the tree should be a sunny well-drained site with plenty of growing space, because evergreens can grow to be 10 to 15 feet wide and more than 30 feet tall.

According to Dana, it’s a good idea to pre-dig a hole so frozen ground won’t prohibit planting. (This little tidbit is why I’m writing about this now). The soil removed from the hole should be stored indoors or well protected so there will be unfrozen soil at planting time.

“Another option is to deeply mulch the site before Christmas,” said Dana. “Then you just remove the mulch and dig the hole at planting time.”

Even with proper preparation, a living tree may still die during its first winter. Evergreens are prone to injury from water loss because the needles lose water during the winter. Trees with un-established root systems, such as newly planted living Christmas trees, are especially vulnerable. Dana suggests watering thoroughly at planting and staking the tree into place. Anti-desiccant sprays may be helpful in controlling water loss.

“Scotch pine is the most commonly grown Christmas tree in Indiana and it makes a fine cut tree, but a poor landscape tree,” said Dana. “This species usually succumbs to insects or disease and dies in less than 25 years. White pine, various spruces or white fir are better choices for a living tree.” Other possible choices include Douglas-fir and Canaan fir.

Despite hassles, a living tree has a certain appeal. But, according to Dana, assuming that it will survive a late December or early January planting in Indiana is risky.

“Given the length of time most people want a Christmas tree in their home, there’s a reduced chance it will survive compared to spring or fall planting,” said Dana. “However, proper preparation, care and planting can increase the likelihood of success.”

For more information, access the Purdue publication, “Living Christmas Trees for the Holidays and Beyond,” authored by Dana and colleagues at Purdue University. (Excerpts above from publication). Find it online at www.edustore.purdue.edu.