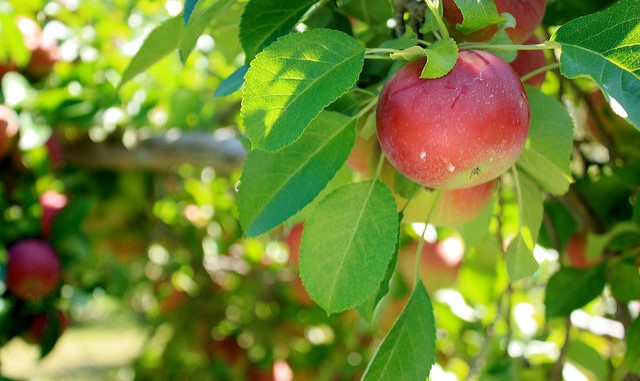 Check with your local grower for hours of operation for U-pick. Pick carefully so spurs are not torn off with your apple. Most people think you should pull apples down to pick, but instead, a quick twist and lifting the fruit up will easily release the stem from the tree. (Stock image via Amie Fedora, Flickr/Creative Commons)

ITHACA, N.Y. — With the U.S. Apple Association predicting Gala will take the title of most popular apple replacing Red Delicious, Susan Brown, professor of horticulture and world-renowned apple breeder provides the history behind both varieties. Brown also says regardless of which type you prefer, this will be a great year for apples.

Brown bred the SnapDragon and RubyFrost varieties at Cornell University. Cornell has released over 65 apple varieties since the late 1890s, including the popular Cortland, Macoun, Empire and Jonagold.

Apple history: “Red Delicious apples have been an icon of the apple industry almost since their discovery and commercialization in 1914. The Red Delicious conic apple shape is what many school children draw as apples across the world. The original Red Delicious was actually a bi-colored apple, but slight mutations in color were found. Over time as the Red Delicious variety was commercialized, there was a change to full red color with an accompanying loss of flavor.

“Gala, while now approaching the No. 1 spot, took a while to get there. Gala was planted as a progeny of Golden Delicious and Kidd’s Orange Red in New Zealand during the 1930s and did not receive its US patent until 1974. Gala has a sweet, spicy flavor and lots of aroma compounds that contribute to great flavor.

“Similarly, our No. 1 apple in New York is McIntosh, which dates back to Canada in the early 1800s.”

What to expect this season: “This will be a great year for apples – with an abundant supply and incredible offerings.”

Apple picking: “Check with your local grower for hours of operation for U-pick. Pick carefully so spurs are not torn off with your apple. Most people think you should pull apples down to pick, but instead, a quick twist and lifting the fruit up will easily release the stem from the tree.

“In picking apples at the store and orchards, bigger isn’t always better. Medium size will be most consistent and less likely to be wasted. Avoid apples that are greasy, or slippery to the touch. These apples are over mature and will not store as well and may have softened. At home and during apple picking, leave the apples on the ground alone.

“Store your fruits in the refrigerator if possible. They will stay fresher much longer.  Keep away from vegetables since they will make those ripen quicker. That is why we have two separate drawers in the fridge.”

Don’t search for perfect fruit: “Some apples have a fine rough surface that is tan colored on parts of the surface. This may be russet-damage caused by frost. It is fine to eat and is only skin deep. Also, you may see smaller or some misshapen fruit. These apples taste just as good as a perfectly shaped fruit.”

Get to know a new variety: “Your grower doesn’t have Mutsu, try a different apple, there are so many to choose from! For baking try a mix of several apples to balance firmness, juiciness and flavors. Have a family taste test. Set out different apple slices as ‘A’, ‘B’ and ‘C’ and see what is a favorite – you may be surprised.”