Home » A history of fairs in New Hampshire
events 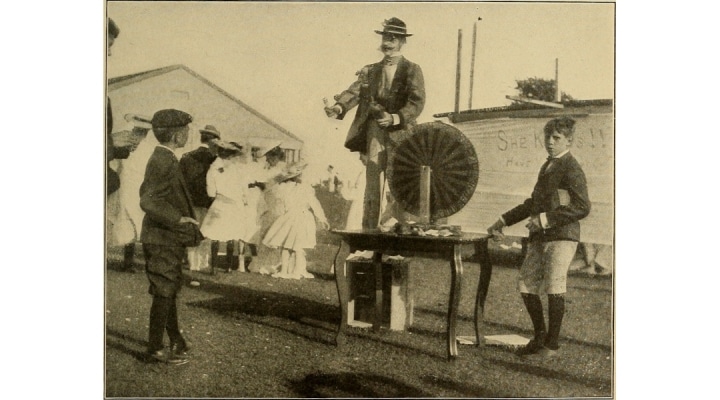 The first fair in the nation was held in Nutfield (now Londonderry) NH in 1722. (Stock photo of a country fair in 1885; Internet Archive Book Images, Public Domain)

In 1970, Leon Anderson, who was the historian for the NH Legislature, wrote a history of our fairs. I will be borrowing from that history for this week’s column.

The first fair in the nation was held in Nutfield (now Londonderry) NH in 1722. At the time, the Scotch-Irish farmers of that town were authorized to hold an open market every Wednesday, and stage semi-annual fairs on May 8th and October 8th, or on the ensuing Monday, if those dates fell on a Sunday. The October event grew so large, that it became a statewide Mecca for over 100 years. The fair included trading, bartering, wrestling, as well as, racing by both horses and humans.

The Londonderry Fair also included flim-flam, which is a trick or deception, especially a swindle or confidence game, involving skillful persuasion or clever manipulation of the victim. The fair became a scandalous event and despite repeated warnings, things did not improve. In 1850 the Legislature repealed the authorization granted in 1722, and the first fair in America was voted out of existence.

There were other, early fairs in the state, which were held even during the Revolution, including ones in Rye and Epping. The Legislature began to subsidize agricultural fairs, with the first aid of $100 each going to the Agricultural Societies in Rockingham and Cheshire Counties in 1817. The following year they received $300 each and $200 was promised to Hillsborough, Strafford and Grafton Counties, if they would sponsor fairs. The Legislature did want a report on how that money was spent. In 1820, it cut the grants to $100 each and withheld payments to four counties, until they reported the spending for the previous year.

In 1820, the Legislature created the first Board of Agriculture, but provided no funding for it. In 1821 they voted a $250 appropriation for the Board. The Board filed its only report in 1822, and from the following excerpt we can see what the fairs were supposed to accomplish:

“The public exhibitions of our agricultural societies are calculated to correct erroneous opinions and prejudices… When our farmers see, at these public shows, stock superior to their own, when they hear accounts of extraordinary crops well attested, and see new or improved tools or machines for facilitating labor, they can no longer doubt. A spirit of emulation rises in their breasts.”

Yet, in spite of this noble purpose, public opinion turned against the fairs. Farmers were seemingly too self-absorbed to care and the Legislature ended the subsidies in 1824, along with the Board of Agriculture. It was felt that the public monies were only going to wealthy farmers. It was also seen as animal cruelty and evil to have oxen walk, 20 to 30 miles with heavy loads for the sake of a few dollars and the amusement of onlookers.

Agricultural fairs saw a revival by 1850, even as the Nutfield Festival was banned. In 1849, The NH Agricultural Society was formed, with Franklin Pierce (soon to become President of the United States) presiding over the first meeting in Representatives Hall. The first fair was held in Concord in 1850, the second was held in Manchester in 1851. Hanging on my office wall is a “Diploma” which I purchased several years ago. That diploma was awarded to Moody Currier for a “Bouquet.” Currier would later serve as the Governor of NH and it is for him that the Currier Gallery of Art in Manchester is named. The President of the Society, George Washington Nesmith, signed the diploma. Nesmith Hall at UNH is named for him. Two of the speakers at the fair were Daniel Webster and John Parker Hale, whose statues now stand side by side on the State House Plaza. As you can see, the NH Agricultural Society was off to a good start.