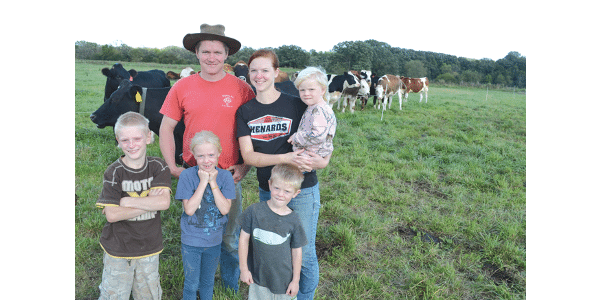 Nathan and Amy Vergin, along with their children Ezekiel, Elizabeth, Titus, and Abigail, shown here on the southeast Minnesota farm of Arlene and Mel Hershey. (Courtesy of Land Stewardship Project)

SAINT CHARLES, Minn. — When Nathan Vergin applied to work on Polyface Face Farm in Virginia back in the mid-2000s, he had to undergo a three-day “working interview.” Vergin, who grew up near Northfield, Minn., went on to serve an apprenticeship with Polyface’s Joel Salatin, who is well-known for his innovations related to raising and marketing pasture-based livestock. It paid off: Nathan and his wife Amy eventually launched their own pasture-based operation on rented land in Virginia. Such hands-on experience is incalculable when considering a farming career.

“That experience puts you in a place where you are ready to walk through that door when the door presents itself,” said Nathan recently as he sat at the kitchen table on a farm near Saint Charles in southeastern Minnesota. In a sense, here in Minnesota he and Amy have wrapped up what amounts to a year-long version of a working interview. But instead of an apprenticeship being on the line, the stakes were higher: the trial period helped determine whether the young couple — she’s 28 and he’s 31 — are the right candidates to take over the dairy Arlene and Mel Hershey started on this farm 46-years-ago.

The Hersheys, sitting at their own kitchen table just a five-minute drive away, say not only have the Vergins passed the test, but have given them the confidence to move into the next phase of a multi-year plan to pass on the operation. This is not something the Hersheys take lightly — over the years they’ve had a handful of apprentices, in addition to their two sons, work their 240 acres of rolling land. Now the older farmers — Mel is 78 and Arlene is 76 — are anxious to hand things off permanently.

So they’re delighted that during their one-year try-out, and in the 12 months since, the Vergins have proven they can weather a mercurial milk market while rebuilding the infrastructure of an aging dairy. Just as importantly, the younger farmers have shown they are committed to caring for the land using managed rotational grazing and other techniques to build soil health.

Over the years, the Hersheys toughed it out through difficult times, including the 1980s farm crisis, by refusing to take on big debt loads to expand. They adopted managed rotational grazing and in the late 1990s became certified organic.

A few years ago, they attended a Land Stewardship Project (LSP) workshop on transitioning farms to the next generation. The workshop featured legal, financial and estate experts. It also provided an opportunity to talk to other farmers who were also considering how to continue their land’s legacy by passing it on to beginning farmers. One thing the Hersheys learned was that no matter what the circumstances, a successful transition requires time — often years.

“Farmers need to start thinking about this sort of thing before they are so old that they can’t think,” said Arlene.

The Hersheys created a one-year trial period during which an apprentice would be paid a salary and get to live in the house (Arlene and Mel moved closer to Saint Charles in 2007) on the farm. With the help of a farm financial expert, a one-year contract was developed that specified wage amounts and what the apprentice was responsible for.

After the Vergins’ one-year trial with the Hersheys wrapped up in early 2019, they began taking concrete steps toward the eventual hand-off. After an accountant appraised everything, a five-year contact was drawn up that sets up a schedule for the Vergins to buy out the Hersheys’ cowherd and equipment. The young couple is still drawing a wage from the farm’s earnings, and using that income to pay for the buy-out. This allows the Vergins to build equity, and provides a retirement income for the Hersheys.

All of this requires lots of clear communication — at least once-a-month, Arlene will go over the finances with the Vergins. The next key step is transitioning the land itself via a Limited Liability Company (LLC). By investing in the LLC, the Vergins can begin gaining control of the land. The Hersheys, for their part, can still draw an income off the farm, while making plans to sell it at a discounted price to the beginning farmers. They feel that if young farmers like the Vergins are to make it, they need to get access to land at a lower price than what it’s often assessed at.

“I think the key to all this is we can’t sell the land for that outrageous price that a farm is valued at, and expect a farmer to survive,” said Arlene.