Home / New Jersey / A Colorful Bromeliad for the Holiday Season
A new user experience is coming! We'll be asking you to login to your Morning Ag Clips account March 1st to access these new features.
We can't wait to share them with you! Read more here. 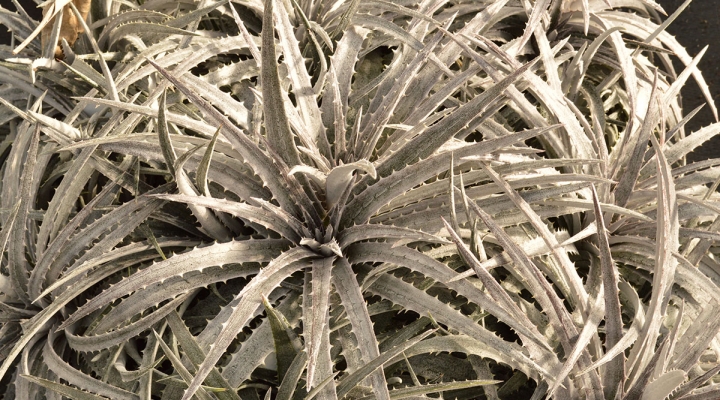 Although the calendar contends December 21st is the official start to winter, I always considered December 1st as the beginning of the chilliest season. Regardless of which date you prefer, it is directly in the midst of the Holiday Season and time to turn our attention indoors for festivities and family. It is also time to buy and gift plants appropriate to the season. (photo by Rutgers University)

NEW BRUNSWICK, N.J. — Although the calendar contends December 21st is the official start to winter, I always considered December 1st as the beginning of the chilliest season. Regardless of which date you prefer, it is directly in the midst of the Holiday Season and time to turn our attention indoors for festivities and family. It is also time to buy and gift plants appropriate to the season. The Poinsettia, with its bright red bracts is the traditional plant of the season, but there remain numerous other long lived candidates that are often not brought to the table. One such group of plants that has piqued my interest for years are the red, yellow and silver leaved forms of Dyckia, commonly called Sawblade Plant. Initially, the common name may dissuade you from considering a purchase, but read on and allow me to convince you otherwise!

Dyckia, which is pronounced Di-key-ă is a member of the Bromeliaceae or Bromeliad family, a huge family with over 3,350 species! It is so large, that it is actually broken down into 8 subfamilies based upon genetic and cultural distinctions. Dyckia is found among the subfamily Pitcairnioideae which it shares with 5 additional genera. The genus name was penned in 1830 by the Austrian botanist Julius Hermann Schultes (1804–1840). The name recognizes the Prussian amateur botanist and botanical artist Joseph zu Salm-Reifferscheidt-Dyck (1773–1861) who had a strong interest in succulents and coincidently was also the Prince of a small region in present day Germany. Dyckia remains a genus that is still not fully understood with 160+ species and undoubtedly more to be described. It appears to have evolved from the genus Encholirium around 4 million years ago (MYA) and radiated or developed many of the species around 1–1.5 MYA.

Although Dyckia is modern by plant standards, the subfamily to which it belongs contains some of the oldest members in the Bromeliad family, predating the more modern epiphytic or tree dwelling Bromeliads. Unlike the more modern species and their preference for the shady, humid environment of the tree canopy, most members of this subfamily prefer growing on cliffs in the baking hot sun. Plants that inhabit areas near or on rocks are defined as saxicolous. Dyckia naturally grows on sun drenched rocky cliffs or on slopes in gravely soils that are low in nutrition. It is found growing mostly in Brazil, but also appears in the neighboring regions of Bolivia, Paraguay, Uruguay and northern Argentina. It appears at elevations near sea level to dizzying heights approaching 6,000′! Its ability to grow at such high altitudes also provides the stamina to endure extremes in temperatures from highs near 100° F to lows of 20° F or colder.

Typical to Bromeliads, the thick leaves of Dyckia are arranged in spiral rosettes and depending upon the species, the foliage may curl downward around the container. Although it was named after Prince Salm-Reifferscheidt-Dyck for his interest in succulents, Dyckia is not a succulent. The thick, leathery leaves are reminiscent of succulents, but they do not contain water storing tissue. Rather, the plants endure extended periods of drought by simply going dormant. However, it is this foliage that provides the plants’ beauty as many selections are wonderfully colored in shades of yellow, red, green and silver. The margins of the leaves are often armed with reflexed spines that gave rise to the common name of Sawblade Plant. Although not all of the species and cultivars possess the sharp spines, they are often silver in color and serve to enhance the beauty of the plant. They also mandate a degree of care when handling the plants! The plants have also developed a long tenuous root system for seeking water in the gritty soils or from cracks in the stony cliffs. A far cry from the short roots typically associated with bromeliads for anchoring the plants to trees, it is not uncommon for the roots of container plants to ‘escape’ through the drainage holes in search of water!

Established plants will typically produce one flower stalk in spring that will vary by the selection from a few inches long to upwards of six feet in May or June. The orange, yellow or red flowers are tube shaped and small by comparison to the supporting stalk. Much unlike other Bromeliads, the rosette of foliage that yielded the flower stalk does not perish, but continues to live and grow. The 18″ long flower spike of ‘Grape Jelly’ is seen in Picture 1. Should the plants be placed outside while blooming, the flowers will attract bees, wasps and even hummingbirds, much as they would in their mountainous homesteads.

There are a number of great cultivars and species that are ideal for container culture and are very apropos for the Holiday Season. As seen in Picture 2 is ‘Grape Jelly’, one of my long-time favorites as seen in a display at Wave Hill. The dark maroon foliage is very attractive and it combines well with a number of other houseplants or tropicals for the summer. The small orange flowers that grace the plant in June are often an unexpected, yet delightful addition! A selection I have only recently discovered is ‘Nickel Silver’, as seen in Picture 3. The silver-gray foliage is very unique and stunning either by itself or in association with other low growing silver plants like Dichondra argentea ‘Silver Falls’, commonly called Silver Nickel Vine. Dyckia brevifolia‘Golden Glow’ is an attractive yellow foliaged form with smaller spines. In general, it is best to grow Dyckia alone in their own container and place them adjacent to containers of complimentary plants as seen in Picture 2. This reduces the amount of physical contact with the plant and allows you to simply enjoy its color and beautiful structure!

The extremely harsh conditions that these plants endure in the wild makes them very easy to grow as a houseplant. The extensive root system dictates that it enjoys a more ample sized container. In fact, the ultimate size of the plant can be governed by the size of the container; the larger the pot, the more robust the plant will become as Picture 2 showcases. Plants appreciate an organic potting soil that drains well yet retains moisture. Surprisingly, the plants respond well to weekly watering or rainfall during the growing season and thrive when placed outdoors during the summer. In fact, pot bound plants often need to be placed in a shallow saucer of water while the plant is actively growing. Since the plants are accustomed to soils with poor nutrition, the plants can be kept more compact by limiting the feed. This is not to say they will object to fertilizing as the plants will respond well to a weekly application of liquid fertilizer that is diluted to ¼ of the recommended rate from April through September. The best foliage color appears when the plant is sited in full sun, although they will flourish in partial shade. As the weather chills during autumn, bring the plant indoors and position in a south facing window. Reduce the watering to once every two weeks as growth slows with the weakening sunlight. With the advent of warmer weather in spring, reinitiate the fertilizing and more frequent watering regiment, which usually helps to spur the formation of flowers in June!

As a group, Dyckia is a very long-lived plant and not fussy in the least. Although the plants are very appreciative of any extra attention, they will be fine if overlooked for several weeks. The colorful foliage certainly blends well with the traditional regiment of Holiday colors and the spiny leaf margins will certainly garner much interest among your guests and family members. Fortunately, the plant does not require considerable handling other than the occasional up-potting and can be enjoyed at a safe distance. Hopefully, you will soon have a colorful new Bromeliad with which to enjoy this season and for many seasons to come. Happy Holidays!