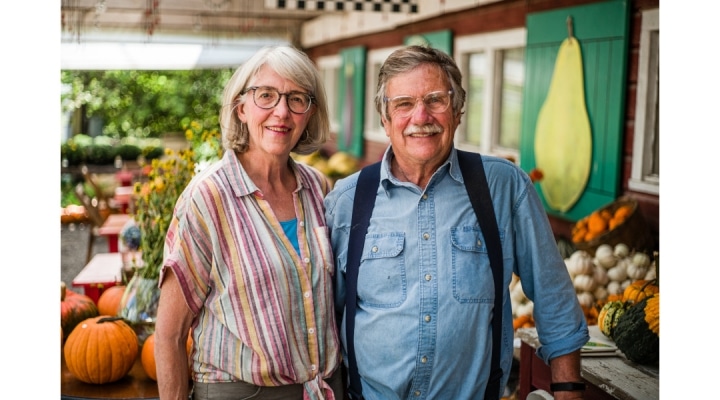 Meg and Rob Southerland at Gardenworks. (Photo by Eric Jenks)

SALEM, N.Y. — Local photojournalist Eric Jenks is proud to display his latest exhibit at the Historic Salem Courthouse, located at 58 E. Broadway in Salem, NY, starting on November 11th, 2021 with an opening from 4-6pm that evening. The exhibit, entitled “A Changing Landscape: The Farms of Washington County,” is the fruit of a year long project documenting four different farms throughout the county. This project is made possible with funds from the Statewide Community Regrants Program, a regrant program of the New York State Council on the Arts with the support of the Office of the Governor and the New York State Legislature and administered by the Lower Adirondack Regional Arts Council (LARAC).

“I’ve always wanted to document the world around me,” said Jenks. “I’ve had a camera in my hand since I could hold one. Growing up first in Vermont and then in upstate New York, the smell of a dairy farm is how I knew I was getting close to home. Any visit to my Great-Uncle Lawrence’s dairy farm in Fort Ann, NY, always included a stop in the barn to help out. From shoveling manure to moving hay, every hand was on deck. It didn’t matter if it was during a birthday or anniversary, the chores still had to be done, and I enjoyed being included that work. I was sad when I heard that Uncle Lawrence had sold the farm. Growing up, it felt like a place that would always be there.”

Jenks, who has had his work published for nearly 20 years, found it important to capture the changes occurring in the local agricultural community. “Farming is a hard way to make a living,” said Jenks. “By 2019, the average age of a farmer was fifty-nine and a half in the US. In 1945, it was just under 48. There’s a lot of factors involved with that change in age. As costs have increased, a lot of farms have consolidated, especially in the dairy industry. It’s hard to keep the smaller farms afloat in today’s markets. Costs have gone up, and a lot of farm grown products haven’t matched those increases. At the same time, we’ve seen rural communities shrink as urban areas have grown, creating a vacuum in the industry. All of that has culminated in what almost amounts to a lost generation of farmers.”

Working with local farmers’ markets and moving to Washington County showed Jenks that there is more to the story than an aging demographic may suggest. “It’s not just doom and gloom for agricultural communities,” said Jenks. “What I’ve seen, especially in the last five to ten years as a photojournalist, is an increased interest in living closer to the land. While many dairy farms have consolidated or disappeared, there is a new generation of farmers that are interested in working the land. They’re creating opportunities for themselves and their small scale, locally grown products, and it’s fun to see how they all do it in different ways. For my project, I tried to find farms that produced different products, and were also at different stages of generational transition at the farm. I wanted to show that while the face of agriculture in the county may be changing, the community that is integrated into its fabric continues to find a way to do what they love, and pass that passion on to another generation.”

Jenks’s exhibit focuses on Battenkill Valley Creamery in Salem, NY, Fuller Acres Farm in Fort Ann, NY, Fresh Take Farm in Granville, NY, and Gardenworks in Salem, NY. Battenkill Valley Creamery is a local dairy that has made their mark by bottling their own product for sale and making their creamery a destination for many with homemade ice cream. Fuller Acres Farm is currently transitioning from a dairy farm to a more diverse portfolio of cattle, mushrooms, and other meat animals. Fresh Take Farm transitioned part of the family farm from a traditional dairy to a thriving vegetable farm and CSA several years ago. Gardenworks is a diverse farm and farm store that was among the first to embrace agri-tourism in the late 1980’s and early 1990’s, and is currently facing the prospect of how to transition their business to the next generation.

“These farmers are my neighbors,” said Jenks. “I had someone ask me where I go to shop for food, living out in the country. My answer is where don’t I go to shop for food? I’m lucky to be surrounded by local farms that sell directly to consumers. You can’t get much fresher than greens that were harvested that morning. It’s wonderful to see the love and hard work that goes into raising animals. It’s a lifestyle that needs to be shared. I am beyond thankful for the opportunity to do so with the grant administered by LARAC, and to the Historic Salem Courthouse for providing a venue to showcase the work.