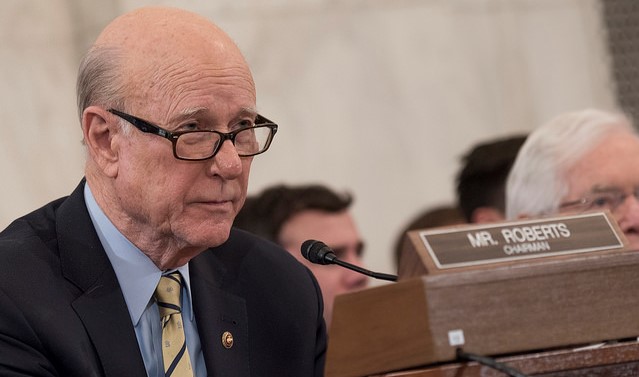 WASHINGTON — U.S. Senator Pat Roberts, Chairman of the U.S. Senate Committee on Agriculture, Nutrition and Forestry, led a bipartisan group of Senators in sending a letter to President Donald Trump supporting “the continued prioritization of a timely, transparent, and science-based system for the approvals of agricultural biotechnology products.”

“Over the last few decades, advancements in research and the development of crop technologies in the U.S. have allowed producers to achieve higher yields, overcome weather challenges, and require fewer inputs, such as pesticide and nitrogen application. This innovation is significantly hindered by delays in China’s regulatory system, as producers who seek to access and compete in the global market risk rejection of shipments of grain and oilseeds,” the Senators wrote.

“We recognize the recent decision to suspend the scheduled tariff increase and look forward to resolving critical trade barriers in the ongoing negotiations. As you prepare to meet with President Xi, and your Administration continues negotiations on a U.S.-China trade agreement, we ask that you continue to prioritize a timely, transparent, and science-based system for the approval of agricultural biotechnology products.”