Home » A better way to spray 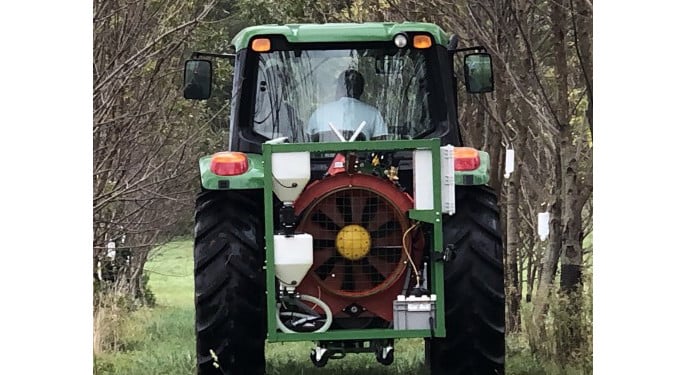 By cutting the amount of pesticide that ends up in the air or on the ground, a new high-tech pesticide sprayer can save vineyard, orchard, and nursery growers money while protecting the environment. The “intelligent sprayer” system was first put on the market in spring 2019, but since then it has been upgraded. (Heping Zhu, OSU CFAES)

COLUMBUS, Ohio — By cutting the amount of pesticide that ends up in the air or on the ground, a new high-tech pesticide sprayer can save vineyard, orchard, and nursery growers money while protecting the environment.

The “intelligent sprayer” system was first put on the market in spring 2019, but since then it has been upgraded. Now, among other improvements, it can take an inventory of trees or vines by height and width and measure the amount of pesticide sprayed per tree or vine to help growers manage pesticide costs.

Developed by a team led by an agricultural engineer with The Ohio State University College of Food, Agricultural, and Environmental Sciences (CFAES), the spray technology can sense the location and structure of the trees or vines it is spraying. In the gaps between trees and branches, the spray automatically shuts off, so no pesticides are discharged.

“A standard sprayer releases pesticide constantly down a row, so a lot of extra pesticide goes into the air and onto the ground,” said Heping Zhu, a CFAES adjunct professor and an engineer with the U.S. Department of Agriculture. Zhu led the team that created the sprayer in collaboration with the USDA and other universities.

That additional pesticide can harm the quality of the soil and air, as well as nearby plants, and it wastes pesticides growers pay for.

An upgrade in the works will keep the water and the pesticide chemicals separate in the machine and only mix them as they are used. In standard sprayers, water and chemicals are mixed in a single tank from the beginning so if there’s any leftover, growers have to dispose of it or spray more than what’s needed.

The sprayer is expected to reduce the pesticide that typically lands on the ground instead of on tree branches or vines by 30% to 90%, Ivey said.

Smart Guided Systems LLC, an Indianapolis-based company, began selling the intelligent spray technology called “Smart-Apply Intelligent Spray Control System” in 2019. The system comes as a kit that can be assembled and added to a standard sprayer. The cost ranges from $27,000 for a 24-nozzle system to $32,000 for a 39-nozzle system.

Within one to four years of using the intelligent sprayer in an apple orchard, the savings in pesticide costs for a 10- to 50-acre apple orchard are estimated to equal the cost of the sprayer, said Ajay Shah, a CFAES associate professor of food, agricultural, and biological engineering. Shah has been conducting economic analyses of the intelligent sprayer technology on nurseries, orchards, and vineyards across Ohio.

“The investment can be recovered within a very short timeframe,” Shah said. “The system will lead to higher profits for the producers while also benefiting the environment.”

(The team Zhu led in creating the sprayer included Ivey and Shah along with Erdal Ozkan, Peter Ling, Lingying Zhao, Yu Gao, and Luis Cañas from CFAES as well as colleagues from several other universities. For more information on the intelligent sprayer, visit smartguided.com/intelligent-sprayer).