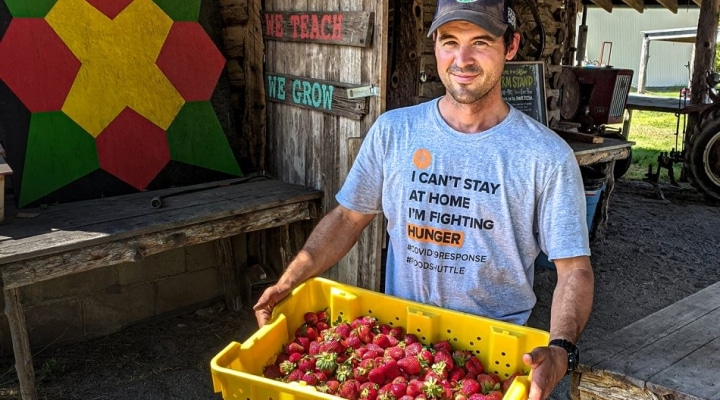 For each of the past three weeks, Hoffmann has harvested between 75 and 100 pounds of strawberries from his experimental plots in Clayton and delivered them to the Inter-Faith Food Shuttle Farm along Tryon Road.

The need is greater than we have ever seen as an organization.

The food shuttle provides not only shelf-stable food but also healthy, fresh produce, and the organization has been “low on produce these days,” Clark says.

“With the unemployment rate rising so quickly, the need is greater than we have ever seen as an organization,” she says.

The organization is delivering the strawberries through its Mobile Markets and Grocery Bags for Seniors programs.

Solving problems for growers and others
Hoffmann passes the nonprofit’s farm on his way home from work, where he conducts research and extension education programs aimed at helping growers improve the economic and environmental sustainability of their farms. It occurred to him that donating the berries to the food shuttle would mean that they would benefit not just those growers but also families and individuals hard hit by the economic downturn associated with the COVID-19 pandemic.

A warm winter set the stage for a strawberry season that’s the best the state has seen in years, Hoffmann says. Production has hit its stride, and the crop has been both beautiful and bountiful.

In fact, the harvest has been so good that Hoffmann wasn’t sure what he could do with hundreds of pounds of strawberries he’s been harvesting from his research plot at the Central Crops Research Station.

We have a bumper crop …, and I didn’t want to throw them away.

Normally, Hoffmann and his associates would be distributing the berries to others on campus to acknowledge their support of the university’s small fruits team and their research and Extension work.

“The strawberries were really good this year, and the season has gone well so we have a bumper crop. It’s a lot of strawberries, and I didn’t want to throw them away and didn’t see any other option,” Hoffmann says.

“I’m actually eating strawberries every day right now, but they’re way too many strawberries for me to eat by myself,” he adds. “Even if I could distribute them among my students, there’d still be too many left over.”

Small but important
Hoffmann expects the crop will amount to 450 to 550 pounds – a small fraction of the 6 million pounds of food that the food shuttle distributes each year to people with low incomes.

Still, Clark says the donation makes a significant difference – and so does the advice he’s provided the farm on managing and expanding its muscadine grape operation.

Clark says she’s happy “that our neighbors in need will be able to enjoy the freshest and sweetest strawberries that they possibly could.”

About Mark Hoffmann
In 2017, Mark Hoffmann joined NC State as an assistant professor and Extension specialist in the Department of Horticultural Sciences. His work focuses on strawberries, muscadine grapes and bunch grapes.

In his spare time, he learns new languages and enjoys running, hiking and backpacking. He’s also an amateur photographer and part of the martial arts community.

Hoffmann holds three degrees, including a Ph.D. in biology and entomology, from universities in Germany, where he was born. For more than 20 years, he was a racing cyclist and musician in Europe.

Asian giant hornets not a problem for NC beekeepers…yet?

Be safe with your fireworks this Fourth of July
July 2, 2020