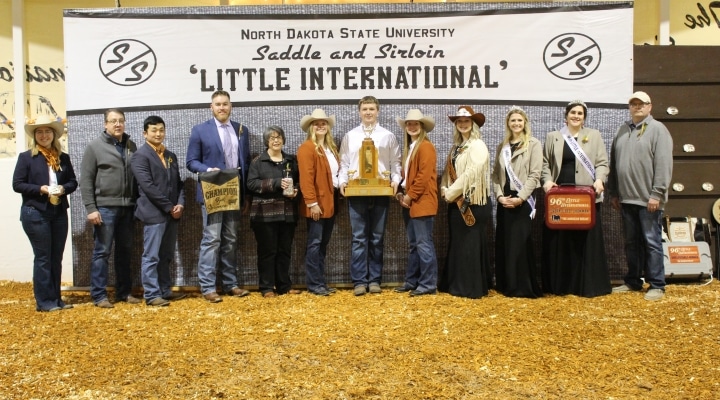 FARGO, N.D. — Tyler Goplen, a junior in agricultural economics from Canby, Minnesota, was named the overall showman at the 96th Little International at North Dakota State University (NDSU) on Feb. 12. Alexis Vanderberghe, a sophomore in animal science from Cleveland, North Dakota, was named reserve champion. Goplen is the son of Gary and Kari Goplen, and Vanderberghe is the daughter of Paul and Lori Vanderberghe.

The 96th Little International was organized by the NDSU Saddle and Sirloin Club at Shepperd Arena on the NDSU campus.

“The Little International Livestock Show is the largest student-run event on the NDSU campus, involving over 300 students,” said Claire Leiseth, Little I publicity chairman and a junior in animal science from Ada, Minnesota. “The show features showmanship classes of beef, dairy, sheep and swine as well as ham curing and public speaking contests.”

Winners of each species and other Little I competitions were:

The show also included a novice division of showmanship for individuals who had never competitively shown their species. Novice winners were:

Other contests that took place before Feb. 13 included: