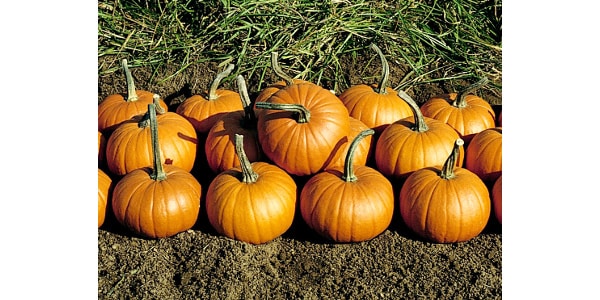 Hallmark does not make movies about people who throw zucchini festivals. Families are not traveling miles to pick heads of cabbage. No one is decorating their front stoop with yams. But pumpkins? All of the above — and then some. (photo by National Garden Bureau Inc.)

NEWARK, Del. — Hallmark does not make movies about people who throw zucchini festivals. Families are not traveling miles to pick heads of cabbage. No one is decorating their front stoop with yams.

All of the above — and then some.

Forget pumpkin-flavored bread and coffee, you can now eat pumpkin cheese. You can feed your mutt pumpkin dog food. You can wear pumpkin deodorant while rowing a pumpkin boat to a pumpkin villagein a 3-D pumpkin sweatshirt. In other words, Americans are obsessed with the gourd — pumpkin-spice product sales reached $511.5 million in 2019. National Pumpkin Day was Monday, Oct. 26.

So how, exactly, did a humble, prosaic fruit (yes, it is a fruit) become a rib-skinned rock star? For answers, UDaily turned to Cindy Ott, associate professor of history and material culture at the University of Delaware and author of Pumpkin: The Curious History of an American Icon. She has the skinny surrounding the autumnal symbol you love to love… or, in some cases, love to hate.

1. Pumpkin makes you feel warm and fuzzy for the past. Because a single seed produces quite a bit, and because pumpkin can be preserved for quite some time, Indigenous Americans once considered the fruit key to their survival. When colonists turned up, they jumped on this pumpkin train for the same reason — but not happily. What these new arrivals really desired were the vegetables they had enjoyed back home in Europe, like turnips and cabbage and onions. As soon as they could, they planted and harvested more familiar produce, and pumpkin became a “food of last resort,” Ott said.

By the 19th century, the rejected gourd had close to zero market value — some farmers grew them only as cheap feed for livestock. But then, an unexpected thing happened. As Americans migrated to urban areas in droves, a sense of nostalgia for the simple farm life of yore settled in.

“They were happy to move to cities — few really wanted to be a farmer,” Ott said. “But Americans have always liked to imagine that we are farmers at heart, because of those agrarian values. Working in soil creates honest, good people, and this, in turn, creates a strong democracy — these are the niche stories Americans like to tell about ourselves, whether they are true or not.”

Because pumpkin was the largest fruit  — and because it had little to no market value — it came to represent the agrarian ideal, the wholesome mascot of this collective farmland longing. The formerly spurned squash began showing up in romantic poems, paintings and other artwork. It would only be a matter of time before it showed up in lattes and muffins and other seasonal treats — things that taste so good to us, Ott noted, partially because of the deep meaning we imbue them with… consciously or not: “When you take something like pumpkin and you sweeten it, you’re sweetening the ideas associated with it, too.”

The country’s most maligned crop had finally made a comeback.

2. Pumpkin love can reshape economies. In the 1970s, when unfair lending practices strained small landowners, and corporate farms increasingly began replacing mom-and-pop operations, independent farmers found a saving grace. By tapping into America’s love of pumpkin, they realized, they could develop a niche market and keep their heads above water. Pumpkin festivals and pick-your-own pumpkin patches became an economic boon that rejuvenated the small family farm.

“They couldn’t compete with the big players in terms of scale and size,” Ott said. “So pumpkin patches became a way for them to stay in business. There are many stories of farmers pulling up a pig sty and putting in these patches because they could make more money selling pumpkins six, seven weeks out of the year than breeding hogs.”

In some cases, this practice rejuvenated entire rural communities. In Circleville, Ohio, population 14,000, the annual Pumpkin Show attracts 400,000 visitors from 34 states most years. One local bakery, according to The Wall Street Journal, does 25% of its business over the course of the four-day party.

Traditionally, it has been difficult for the corporate sector to get a piece of this, ahem, pie. For major canned food label Libby’s, growing pumpkin on industrial California farms in the 1970s did not pay off. Instead, the company began paying small farmers to grow the crop within close range of its plant in Morton, Illinois — a practice that continues to this day.

“It just goes to show,” Ott said. “The symbolism is more important than the meat.”

3. Pumpkin hate is real, too. Perhaps nothing epitomizes the nation’s pumpkin evangelism more than the meteoric rise of the Pumpkin Spice Latte, sold at Starbucks beginning every August. Approximately 424 million so-called PSL’s have been guzzled worldwide since the drink’s launch in 2003.

But, as the espresso sensation has spawned a food revolution — hello, pumpkin-spice salsa and cream cheese — it has also incited increasingly vocal detractors. The late celebrity chef Anthony Bourdain once called hordes of pumpkin-spice fanatics “crazed,” and he wished the trend would be “drowned in its own blood.” John Oliver referred to the mania as “tyranny,” while Martha Stewart lamented its popularity among “basic” women.

“The reactions are irate,” Ott said. “There is nutmeg coffee and even a cranberry-spice coffee, and that sounds gross, but no one gets incensed about it the way they do with pumpkin. So the question becomes: Why do people care so much?”

Pumpkin party-poopers, Ott speculated, might be reacting against the ultra-commercialization of a fruit that gained popularity precisely because it represented the opposite: a non-industrial agrarian ideal. The theory is espoused by the opinion site Vox, which called the “unctious, saccharine” coffee drink, with its artificial flavors and 39 grams of sugar, “the greatest trick capitalism ever played.” Of course, it is also possible naysayers are reacting to the way pumpkin spice lattes have come to symbolize whiteness in recent years — their “fluffiness, lack of substance and triviality… make them ultimate luxuries and hence markers of distinction and white privilege,” reads one study.

“It is hard to explain, but pumpkin spice represents values that are making people react very strongly,” Ott said. “It is an important question to raise, in order to explore the deep meanings people invest in food.”

4. Pumpkin is racially charged. In 1796, American Cookery became the first cookbook published by an American author. Because the influential text was distributed in the New England area, one of its recipes — pumpkin pie — became known as a “New England specialty,” according to Smithsonian magazine. This connection to the north meant the gourd became a symbol of anti-racism in the run-up to the Civil War. Leading abolitionists incorporated the fruit into poems, literature and artwork. Activist Sarah Joespha Hale, author of Mary Had a Little Lamb and fierce advocate for making Thanksgiving a national holiday, featured the “distinguished” pie in her anti-slavery novel Northwood. She and fellow abolitionists frequently drew comparisons between the yeomen pumpkin farms of the north and the slave-run plantations of the south, in order to highlight ethical differences.

Southern states, however, rejected pumpkin pie — and all it symbolized — as Yankee hogwash. Small tenant farmers who harvested the gourd in the south were not seen as noble but, rather, simple and worthy of insult. African American farmers, in particular, were derided with terms like “pumpkin head” and “pumpkin roller.” To this day, Ott said, sweet potatoes edge out pumpkin as the most popular fall pie filling below the Mason-Dixon line.

5. The original jack-o’-lanterns were turnips. According to Irish legend, Stingy Jack was a mischievous blacksmith who repeatedly outsmarted the devil. When he died, this prankster was not welcomed into either heaven or hell. Instead, Satan demanded that he roam the Earth for all of eternity, with nothing but a piece of burning coal to light his way. Stingy Jack put this ember inside a hollowed-out turnip, carrying it with him as he scared little children in the dark of night. Townsfolk referred to the man as “Jack of the Lantern” and, eventually, “jack-o’-lantern.”

In order to ward off Stingy Jack and other unsavory characters, people in Ireland and Scotland began carving scary faces into their own turnips — and also beets and potatoes — to place in window sills. Early immigrants brought the tradition to the U.S., where pumpkins became the lantern of choice. Over time, the practice has become less spooky, more family fun.

6. There’s a reason you call kids pumpkin. For a long time, children in America were expected to act like little adults — responsible, quiet, obedient. But, in the 19th century, the collective child-rearing attitude began to shift. As people increasingly viewed immersion in nature as important not just physically but morally, they came around to the benefits of allowing for “wild and untamed” children, Ott said.

Kids — less formal, more feral — became reminiscent of the pumpkin. Because of its fast growth and large size, the gourd was often described in literature as animalistic. But, because of those associations with agrarian life, it also represented — like children — a certain natural wholesomeness. Libby’s canned food company contributed to the use of pumpkin as a nickname for children with an advertisement that featured two babies sitting inside carved-out gourds. The implication?

“Our pumpkins are as fresh and innocent as these apple-cheeked kids,” Ott said.

7. Pumpkin is here to stay. What constitutes pumpkin overload? Will there be a pumpkin tipping point? A moment society finally jumps the pumpkin shark? After all, there is no practical purpose for pumpkin flavoring in coffee or pumpkin decor. Won’t Americans eventually get seduced by a cornucopia of other, less hackneyed harvests?

“It’s not going away,” Ott said. “Because of all that it represents, pumpkin is not going anywhere.”