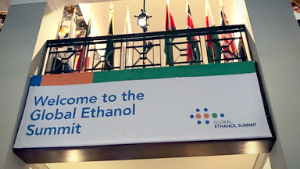 "The number of countries with ethanol policies on the books has grown exponentially in the last 18 months, and ethanol trade around the world remains strong, showing the level of commitment these countries have to reaping the benefits of this biofuel," said Ryan LeGrand, U.S. Grains Council (USGC) president and CEO. (Courtesy Photo)

WASHINGTON — Industry and government officials from 60 countries are meeting with U.S. officials in the nation’s capital this week at the Global Ethanol Summit to learn about changing biofuels policies in countries around the world and prospects for expanded global ethanol use.

“In the spirit of global collaboration, access to free trade and increased use of ethanol worldwide, we look forward to hosting, along with our partners, this meeting that focuses on ethanol’s role in improving human lives around the world,” said Ryan LeGrand, U.S. Grains Council (USGC) president and CEO.

“The number of countries with ethanol policies on the books has grown exponentially in the last 18 months, and ethanol trade around the world remains strong, showing the level of commitment these countries have to reaping the benefits of this biofuel. The Council is proud to bring this group together in Washington, D.C.”

This week’s Summit, sponsored by the Council, Growth Energy and the Renewable Fuels Association (RFA), features high-level government and industry officials from Algeria to Vietnam, who are working together to expand the global use of ethanol by developing policies with a role for trade.

Building on the success and momentum of 2017’s Ethanol Summit of the Americas and 2018’s Ethanol Summit of the Asia Pacific events, the Global Summit seeks to capitalize on potential markets around the world as demand increases for higher-level biofuels policies – including decreasing greenhouse gas (GHG) emissions and improving clean air quality. The Council and its partners are working in all of these countries to highlight ethanol’s benefits and address constraints to expanding ethanol’s use.

“The Summit highlights policy conversations going on in governments around the world, scientific rationale for the increased use of ethanol and market development opportunities for U.S. ethanol,” LeGrand said. “The benefits of ethanol use provide common ground for countries to collaborate as they seek to meet their societal goals.”

The Summit also allows senior-level officials from agriculture, environment and energy ministries from around the world to discuss environmental, human health and economic benefits of ethanol use with industry leaders, while it fosters collaboration and trade across the region.

The two-day conference will feature remarks from both the U.S. Department of Agriculture’s (USDA’s) Deputy Secretary Stephen Censky and Foreign Agricultural Service’s Associate Administrator Daniel Whitley, who will speak on collaboration and trade and the U.S. energy renaissance, respectively.

The conference also includes views and analysis on the overall global ethanol outlook; a focus on Brazil and Canada’s changing environmental policies; the costs of inaction on both air quality and related human health consequences; a look at industrial ethanol use and the bioeconomy; octane economics; vehicle compatibility; perspectives from ethanol retailers; and prospects for the future use of ethanol.

The U.S. ethanol industry’s efforts, including conferences like the Summit, establish the United States as the resource for experience in developing an ethanol industry and as a trading partner.

The United States exported 6.1 billion liters (1.62 billion gallons, or 609 million bushels in corn equivalent) of ethanol in 2018, valued at $2.7 billion. According to analysis of USDA data, the volume of U.S. ethanol exports grew by 18 percent per year over the last five years, making ethanol the fastest growing U.S. agricultural export.

US consumers snap up Italian Parmesan before tariffs hit