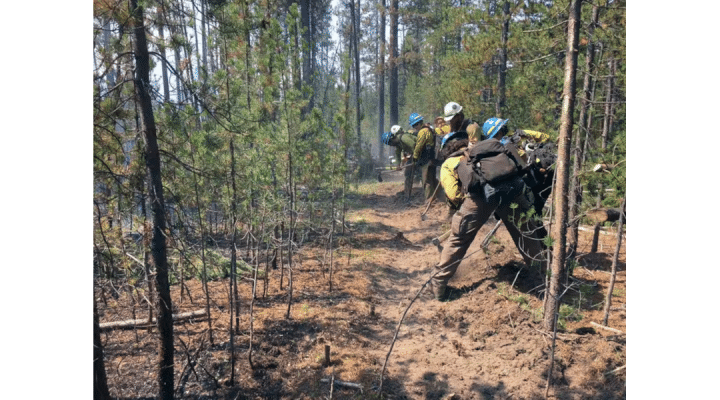 GAINESVILLE, Fla. — Wildfires fueled by dry, windy conditions have destroyed dozens of homes in Texas and threatened hundreds of others there and in Oklahoma and Florida this March. They’re a sharp reminder to be prepared for what forecasters warn is likely to be a risky spring for wildfires, particularly in the southern Plains and Southwest.

I’m a fire ecologist and director of the Southern Fire Exchange for the University of Florida. Here are six terms you’ll often hear when people talk about wildfires that are useful to understand, both for preparing for fire season and gauging the risk when fires start.

Imagine looking down at a wildfire from an airplane. Firefighters want to build a perimeter around that fire with control lines, or firebreaks – areas cleared of vegetation – that they hope will prevent the fire from spreading.

Getting 100% containment is the goal, but it takes some time to get there, and a wildfire is a moving target.

Having 100% containment doesn’t mean the fire is out. It just means the fire agency has containment lines around it. There can still be burning, smoldering and active flames. When conditions are hot, dry and windy, embers can blow across the fire lines and cause spotting – fires started by those blowing embers.

In the end, it’s Mother Nature that typically puts large fires out for good, and it may be weeks or months before they are officially declared out.

A red flag warning means weather conditions are expected that would raise the risk of dangerous wildfires spreading.

You’ll hear the phrase red flag warning used across the country, but the criteria actually vary by geographic location. For north Florida, for example, a red flag warning is triggered when relative humidity is at or below 28%, winds are 15 miles per hour or above, and the fire has met a threshold in the Forest Service’s risk calculations known as energy release component, or ERC.

It’s really important that people understand and respond to fire weather warnings appropriately. Most wildfires are caused by people. When red flag conditions are forecast, that’s really not the time to be burning leaves in the backyard or building a campfire.

Fuel refers to all the vegetative material that’s available to burn. It can be everything from leaves, twigs, grasses and sticks to bushes and shrubs and heavy logs on the ground.

It can be dead fuel or live fuel. The threat posed by live fuels also varies by region. In the Western U.S., grasses are typically available to burn only once they go dormant and dry out. In the Southeast, however, live fuels like palmetto and grasses will still burn quite readily because of their volatile oils.

During a wildfire, you’ll hear fire managers and firefighters talking about “burnouts” or “backfires.” Those are fires that are intentionally lit and allowed to spread toward the wildfire.

By burning off vegetation ahead of the wildfire, firefighters leave the wildfire with less fuel to burn in hopes of either stopping it or reducing its intensity.

A prescribed burn has a prescription – a written plan that specifies the ranges of weather conditions that fire managers anticipate will be acceptable for using and then extinguishing the fires, as well as the resources needed to accomplish it successfully and the intended outcomes and objectives of the burn. In some areas, it can take years to write a plan and execute it.

Prescribed burns have additional benefits. They allow forest managers to reduce fuels in a way that can also promote good wildlife habitats and healthy ecosystems. Prescribed fires apply the positive aspects of fire in the safest way possible.

In the Florida Panhandle fires in March 2022, for example, three fires were burning in a relatively close area, but the same fire teams were involved, so they opted to manage it as a complex. Similarly, a group of Texas fires later that month were named the Eastland Complex.

Are you looking for other wildfire terms? The National Wildfire Coordinating Group is the master resource.