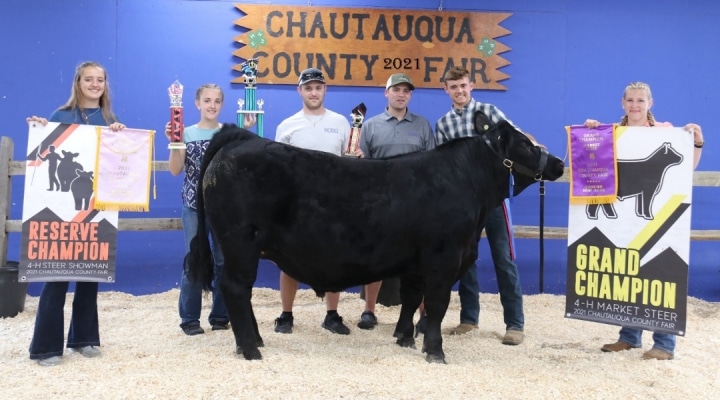 Local businesses and 4-H supporters were out in full force. A total of 119 animals were sold at this annual event with 12 animals donated back from buyers. The profits of the re-selling of the animals go to a charity of the buyer’s choice. Youth can also choose to donate a portion of their sales to a charity of their choice. This year nearly $10,000 in donations were raised to benefit various projects and scholarship funds.

This year’s sale began with the Pledge of Allegiance, a suggestion by 4-Her Hunter Colvin who led the crowd in the pledge. The Hog Project Memorial Scholarship winner was also announced. Corinne Covert received the $500.00 scholarship held at the Chautauqua Region Community Foundation.

The Market Chicken program had 29 pairs of birds to offer in this year’s sale. The average price per pair was $350.00. Kamryn Harper received the grand champion market poultry honors and sold her pair of Cornish Rock Cross birds for $250.00 to Doug and Sue Harper. Rachael Harper raised the reserve grand champion pair of market birds also purchased by Doug and Sue Harper for $285.00. Abigail Carlberg’s pair of birds were the top earners of the day selling for $600.00 to K.B. BioEnergy.

Local auctioneers volunteer their time and without them, the 4-H Meat Animal Sale wouldn’t be possible. This year Andy Campbell, Dale Eckman, Dakota Peterson, and Heath Reed volunteered their auctioneer talent for the sale. Corey Schauman, Kayla Schauman, Patrick Kibbe and Bob Styers helped in the ring for the duration of the sale. Abbie Gzregorzewski, Little Creek Photography, donated her time and photographed every youth with their buyer.

An often-overlooked community partner of the 4-H Meat Animal Sale each year are the area slaughterhouses who truck and process 4-H meat animals. There is a high demand for animal processing in our area and without the support of the slaughterhouses, the 4-H Meat Animal Sale would not be possible. Each year Coffaro’s Custom Butchering, Kennedy Meat Market (KMM), and Steven’s Brothers Processing devote the week following the fair to processing 4-H animals. HLW Acres in Attica, NY process the market chickens. Thank you, processors, for your support of 4-H! 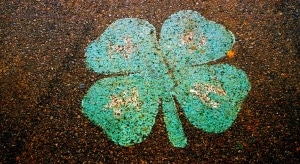 STRONGHURST, Ill. — Hard work, quality care, and dedication paid off as 4-H members in Henderson County showcased their animals at this year’s Henderson County Fair. These events provide an opportunity for youth to display sportsmanship and exude confidence as they showed the “best of the best” during the annual livestock and animal shows. 4-H […]