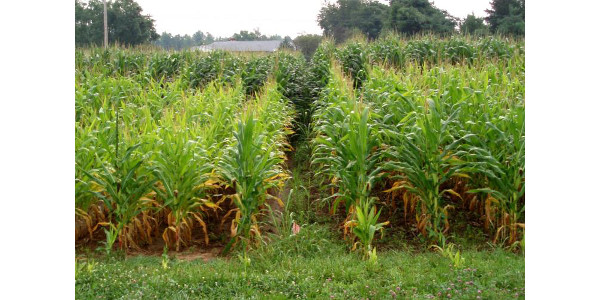 LEXINGTON, Ky. — Kentucky has long been known as an international leader in research and farmer adoption of no-till soil management. The University of Kentucky College of Agriculture, Food and Environment recently celebrated another milestone in this legacy with the 50th anniversary of ongoing research on the Blevins plots.

“There are only a handful of long-term research sites like this in the United States dedicated to continuous no-till research,” said Rebecca McCulley, chair of the UK Department of Plant and Soil Sciences. “It’s important that we continue to collect data from this site, so we can document and quantify the benefits of no-tillage systems on crops, soil health and environmental quality.”

UK soil scientist Bob Blevins initiated the research experiment in spring 1970, planting corn into a bluegrass pasture located at UK’s Spindletop Research Farm in Lexington. Blevins started the project to examine the effects of four nitrogen fertilizer rates in both conventional and no-tillage systems on corn yield from the Maury silt loam soil type found throughout the state’s central Bluegrass region. He followed it with a winter cereal cover crop of either wheat or rye.

“These research plots were extremely important in helping Kentucky farmers understand the benefits of no-till and may have played a part in the large number of Kentucky producers willing to adopt the practice early on,” said Hanna Poffenbarger, UK soil scientist.

“While both tillage systems have had a stronger response to nitrogen rate with time, the no-till system has remained superior throughout the entire study in terms of yield. This is likely due to an increase in soil organic matter in the no-till system, which also serves as a source of nitrogen,” Grove said. “No-till also has a higher yield response in dry years, because it conserves water better than conventional tillage systems.”

Over the 50 years, the plots have hosted UK faculty studies and have been the site of many UK graduate student research projects. At least 45 research publications, doctoral dissertations and master’s theses have been produced with data gathered from the plots.

Going forward, a new group of UK soil scientists will manage the plots. Poffenbarger is one of the scientists in that group.

“I will be studying the difference in soil organic matter in the no-till and conventional till plots and how that affects optimal rate and timing of nitrogen fertilization. The long-term build-up of soil organic matter in the no-till plots may reduce the crop’s dependency on optimally-timed nitrogen fertilizer inputs,” Poffenbarger said. “Having access to the long-term plots and past research publications has been extremely helpful, as I begin my research program.”