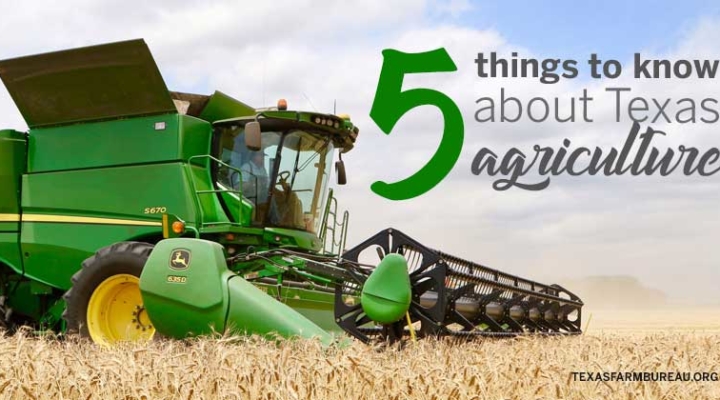 The Lone Star State is vastly different, but agriculture ties Texas together no matter what part you’re in. (Texas Farm Bureau)

AUSTIN — Everything’s bigger and better in the Lone Star State. Even agriculture.

I’ve put quite a few miles on my vehicle in the last month as I traveled to visit some of our state’s farmers and ranchers.

And there are five things I think everyone should know about Texas agriculture.

5. There are lots of farms! In fact, Texas has more than 248,000 farms with more than 130 million acres of farmland. That’s more than any other state in the nation.

4. Diversity is key. And it’s probably the best kept secret in Texas agriculture. From north to south and east to west, there’s room for crops to grow and livestock to roam. The Rio Grande Valley is ideal for growing citrus and sugarcane, among other crops. The Panhandle is home to beef cattle, dairy cattle and cotton. East Texas is known for its forestry and hay production, while West Texas’ terrain is good for sheep and goats. Central Texas has a little bit of corn, wheat, grain sorghum, cattle and more. But Texas farmers also grow some of our favorites—strawberries, grapes, asparagus and potatoes. Even tomatoes! And they raise pigs, chickens and turkeys. Talk about a diverse bunch of farmers and ranchers!

3. We’re at the top in cattle numbers. Texas ranks number one in the nation for cattle. Probably guessed that one, right? As of Jan. 1, we have 12.5 million cows and calves in the state.

2. And we rank number one in the nation for cotton, horses and sheep and goats. That’s right. We rank at the top for quite a few. No horsin’ around!

1.  Jobs, jobs, jobs. Texas agriculture employs one in seven Texans. Teachers, scientists, the food sector, communicators and more are all tied to agriculture.

Drive down any Texas highway and you’re likely to run into agriculture. Livestock and crops line the roadways and trucks and trailers travel our roads hauling goods.

So, the next time you’re on a road trip, check out the fields between the cities. Those fields and pastures connect directly to what you put in your grocery basket and on your plate. And you can hear directly from farmers and ranchers about our food in this video.

The Lone Star State is vastly different, but agriculture ties Texas together no matter what part you’re in.