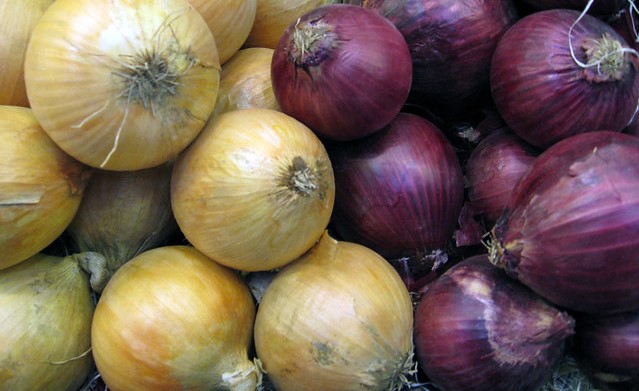 America’s onion farmers and researchers have yet to fully get a handle on bacterial rots, which can affect an onion at all stages of growth. (Ruth Hartnup, Flickr/Creative Commons)

WASHINGTON — For years more than 15 bacterial species have ruined millions of dollars worth of onion crops across the United States. That is bound to change, as a group of 24 researchers from 12 states across the country, including one researcher from South Africa, plan to take on these bugs, armed with more than $8 million over the next four years.

The USDA Specialty Crops Research Initiative recently announced the award of $4 million to the group in their project entitled, “Stop the rot: Combatting onion bacterial diseases with pathogenomic tools and enhanced management strategies” (Award No. 2019-51181-30013). The project comes with a match of $4.2 million match from onion growers, universities and seed companies all recognizing the severity of bacterial diseases on America’s onion crops.

“They all have skin in the game,” said Lindsey du Toit, principal investigator for the project and a professor and extension plant pathologist with the Department of Plant Pathology at Washington State University. “This is a stakeholder-driven need. It’s not driven by academics in their ivory towers thinking they need money to fund their pet projects.”

“For five to six years, I’ve been jotting down notes about key things that could be looked at, in relation to hearing many stories about losses due to bacterial diseases,” du Toit said. “I became increasingly aware of the need to pull together a team to really focus on how we can do a better job, and the importance of the stakeholders being involved in that planning.”

America’s onion farmers and researchers have yet to fully get a handle on bacterial rots, which can affect an onion at all stages of growth. Typically the only way to eliminate these pathogens is through getting rid of the affected onions. Sometimes an entire load of onions can be affected but not detected until that load has shipped across the country, which can devastate smaller, family-run farms, the backbone of America’s agriculture industry.

At present, onion growers do not have highly effective bactericides to rely on to eliminate bacterial diseases.

“These diseases are not easy to manage,” du Toit said. “If they were, growers would have figured it out by now. They’re ingenious and pretty creative.”

An important aspect of this research will be on the use of cultural practices to manage the problem such as modifying irrigation practices. Part of this project also will be identifying ways of screening for resistance in onion varieties to develop stronger cultivars.

“We know from experience that cultural practices can make a big difference at increasing or reducing the risk of these diseases,” du Toit said. “A lot of it comes down to managing irrigation, nitrogen levels, the timing on when you undercut the onions, and how you cure then in the field and manage the soil.”  In turn, that may be the most economical tool in this war on bacteria.

Researchers had to wage a herculean effort to get this project off the ground. Though they were notified in January that the pre-proposal submitted in December was accepted for submission of a full grant, they weren’t aware of the new reinstatement of a 10-year-old requirement for a 100 percent match in funding, authored under the new Farm Bill. The researchers had just three months to figure out how to come up with at least $4 million in funding to match the federal funding requested in the proposal.

Those involved dug deep, and from in kind donations of farming and implement costs as well as professor’s and other staff and student salaries or assistantships, they were able to come up with it, du Toit said. About $2 million of that came from growers alone.

“They looked at the value of their projected in-kind contributions to the project, whether it be land, the value of the crop used for trials, and the cost of the farm work done to maintain the trials, and tallied all that up to come up with their matches,” du Toit said.  “This is the perfect example of the kind of problem this Specialty Crops Research Initiative program was developed to address.”

The Specialty Crops Research Initiative is a part of the USDA National Institute for Food and Agriculture, and addresses the critical needs of the specialty crops industry by awarding grants to support research and extension that address key challenges of national, regional, and multi-state importance in sustaining all components of food and agriculture, including conventional and organic food production systems.