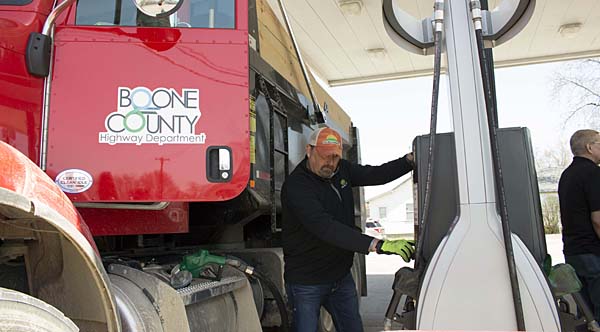 LEBANON, Ind. — More than 200 cars, vehicles and heavy equipment came to Mimi’s Market at the Co-Alliance CountryMark fuel station in Lebanon in an effort to raise money for the Jacob Pickett Memorial Fund.

“It was really awesome to see the community come out and show full support,” said Clint McClaine, local Co-Alliance Petroleum Service Representative. “It shows what a great sense of community there is in the Lebanon and Boone County area.”

Several community organizations filled their tank during the event including the Boone County Highway Department and Lebanon Police. There were several moments when the parking lot was jammed and cars and heavier machinery had to be directed.

“We knew the event would exceed expectations when we sold 300 gallons in the first 30 minutes,” said Jason Hine, Co-Alliance Retail Direct/ Transportation Manager. “It’s amazing the way people can come together to help someone after a tragedy like this.”

The event was originally supposed to be held from eleven in the morning until four that afternoon but with such a strong turnout, gallons were counted until four-thirty.

For every gallon sold during the event one dollar will be donated to the Jacob Pickett Memorial Fund, overseen by the Boone County Sheriff’s office. Cash donations were also accepted for a grand total of $4,000. The fund was established to honor the memory of Boone County Deputy Jacob Pickett who died earlier this month.