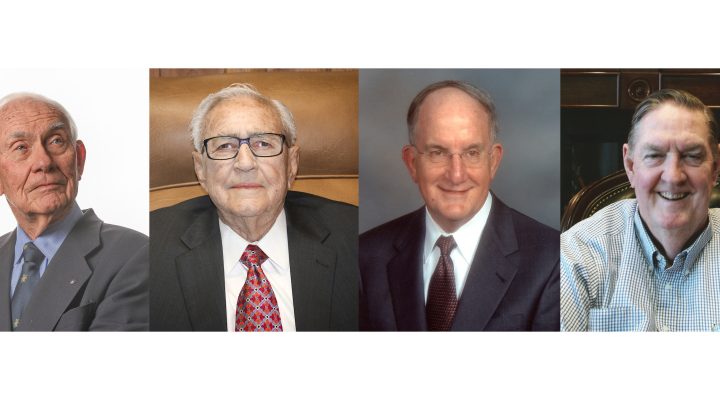 GAINESVILLE, Fla. — Two UF/IFAS College of Agricultural and Life Sciences alumni, a producer who worked with UF/IFAS Extension and UF/IFAS Research and a contributor to the UF/IFAS School of Forest Resources and Conservation will be inducted into the Florida Agricultural Hall of Fame in February.

Florida Agriculture Commissioner Adam Putnam and the Florida Agricultural Hall of Fame Foundation have announced the four honorees. Each was born and raised on a Florida farm, and each has made outstanding contributions to Florida’s agriculture industry and mentored future leaders in the field. The UF/IFAS-related inductees are:

Lester returned to Florida and began his career as a research economist with the Florida Department of Citrus. He was eventually promoted to executive director in 1979. In 1986, he took a position with Alico, Inc. Board of Directors until 2005. During this time, he joined the Gulf Citrus Growers Association and was actively involved in all aspects of the association’s mission.

“Bernie Lester has been a tireless advocate on behalf of Florida agriculture for more than four decades,” John Hoblick, president of the Florida Farm Bureau, wrote as part of his letter in support of Lester. “His knowledge of production agriculture and his excellent skills in leadership positions are recognized by anyone works with him…”

• Eugene Badger, 88, was born in Hastings, Florida, and graduated from UF CALS in 1949 with a bachelor’s in agricultural education. Following graduation, he began teaching agriculture at Palatka High School. Badger eventually went to Belle Glade, Florida, where he accepted a management position with the Western Palm Beach County Farm Bureau in 1972, and advocated for farmers.

Badger’s strong advocacy and dedication to Florida farmers was underscored in 2008 by Senate Resolution 1366, recognizing him for his lifetime accomplishments in agricultural leadership and service to Florida residents.

“Gene’s hard work, dedication and services throughout the years have truly been a catalyst for not just UF/IFAS, but also Florida agriculture in general,” wrote Jimmy Cheek, former senior vice president of agriculture and natural resources at UF.

• Among his many contributions to Florida agriculture, Joe Marlin Hilliard, 74, worked with UF/IFAS to educate South Florida farmers about the tropical soda apple weed.

Following high school graduation, Hilliard began working on Hilliard Brothers Cattle Ranch, which was founded by his grandfather in 1906, and later owned by his father and uncle in the 1920s.

He was one of the first producers to grow sugarcane on sandy soil, beginning in 1961. He created research projects with the UF/IFAS Southwest Florida Research and Education Center in Immokalee and the UF/IFAS Everglades REC in Belle Glade to advance his knowledge on this endeavor. Hilliard worked with UF/IFAS Extension and UF/IFAS Research to reduce the use of phosphorus fertilizer and improve the quality of water draining into the Everglades.

• The final inductee is William Cook, 86, a Florida native, born in Tallahassee, who spent his career supporting agriculture in the timber and turpentine industry, first with his family in Callahan, Florida. He first acquired Callahan Timber Co. in 1965, and he eventually emerged as a leader of the forest and forest products industry, ascending to the board of directors and the President of Florida Forestry Association.

As a member of the association — a longtime supporter of UF/IFAS — he helped form the Florida Forestry Foundation. The foundation helped channel funds from forest industries to support research and education in the UF/IFAS School of Forest Resources and Conservation. This support allowed pioneering research in genetics and forest tree improvement, nutrition, forest pest management and tree biology. Recently, Cook supported a UF/IFAS effort to re-build the Learning Center at the Austin Cary Forest. Similarly, with Cook’s help, the school established a turpentine demonstration site, centered on the restoration of a turpentine still at the forest.

“The contributions these men have made are nearly incalculable to Florida’s agricultural sector,” said Jack Payne, UF senior vice president of agriculture and natural resources. “The people of Florida owe them a huge debt of gratitude for their improvements to the state’s economy and environment. That’s a huge reason they’re being inducted into the Florida Agricultural Hall of Fame.”