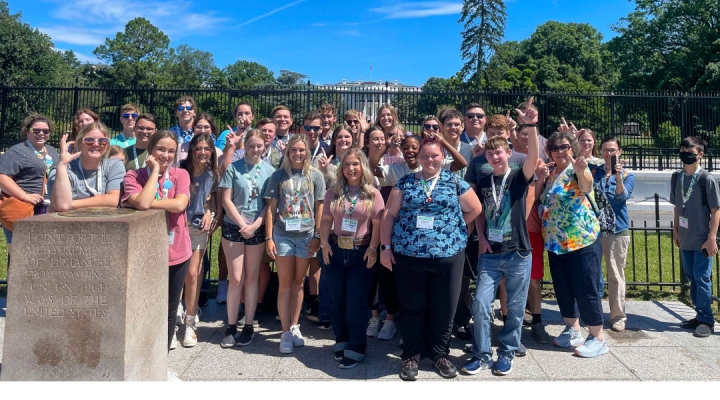 Oklahoma and Kansas 4-H’ers and adult chaperones took in the sights in the nation’s capital during the 2022 Citizenship Washington Focus. (Photo provided)

STILLWATER, Okla. — History and civics books came alive for a group of Oklahoma and Kansas 4-H’ers who took part recently in the Citizenship Washington Focus trip.

Thirty-three club members and four adult sponsors made the bus trip to Washington, D.C., June 16-25 where they participated in educational workshops, wrote mock legislation and toured the nation’s capital.

Civic engagement is part of the framework for the Oklahoma 4-H Youth Development program, and opportunities like this help reinforce those learning situations, said Cathleen Taylor, state leadership and civic engagement specialist with the State 4-H office at Oklahoma State University.

“The purpose of this trip is to learn about how our government works and how 4-H’ers can impact their communities through civic engagement,” Taylor said. “Using the medium of Washington, D.C., our youth are right in the middle of where our government is happening.”

The group stopped at Gettysburg where they received a guided tour of the battle sites. They also had an opportunity to visit Philadelphia where they saw the Liberty Bell and Independence Hall.

“It was a lot of fun for our delegates to see where our country started and the progression of the United States,” Taylor said.

Once the group arrived in Washington, D.C., they got down to business by attending a variety of educational workshops. They also learned how to write bills and other legislation.

Taylor said one of the most educational opportunities was when the delegation divided into three groups and developed state action plans to implement when they returned home.

“The youth were charged with seeing a problem within their community or state and developing a solution or a way to combat the issue,” she said. “Our group focused on how to increase and retain 4-H members, encouraging citizens to support local businesses and food insecurity. Once they developed their plans, they presented them to another state. Not only did they have to work together and strategize about the issues, but this exercise also gave them an opportunity to work on their public speaking skills.”

Throughout their time in Washington, D.C., participants visited the Franklin D. Roosevelt and Martin Luther King memorials, the World War I and World War II memorials, Lincoln Memorial, the Vietnam and Korean War memorials, the Thomas Jefferson Memorial, and the Pentagon and Air Force memorials. They also went to the top of the Washington Monument for a bird’s-eye view of the city.

“While we were on one of our tours, we saw a presidential flyover of Marine 1. That was pretty exciting for the group,” Taylor said.

Other activities included attending Spongebob the Musical at Toby’s Dinner Theater; a visit to Capitol Hill and meeting with former Oklahoma 4-H’er Ricky Schroeder, who addressed the group about how 4-H helped him get his current job in the House of Representatives Agriculture Committee; a presentation of Twilight Tattoo, a walk-through, live-action performance about the history of the U.S. military; and a visit to the Smithsonian Museum.

“Oklahoma and Kansas have been participating in CWF for many years, and it truly is one of the premier opportunities available to club members,” Taylor said.