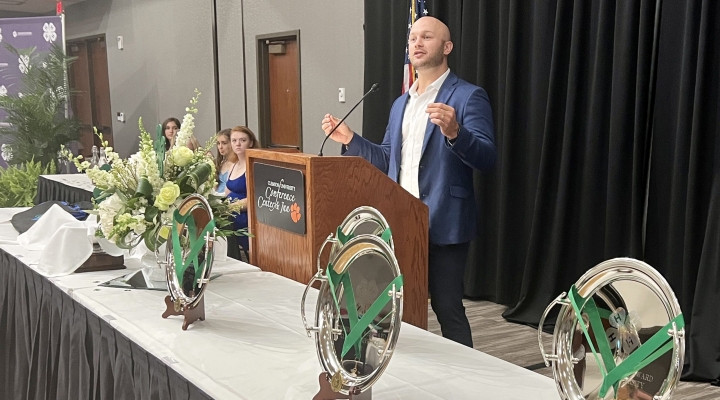 Just like the game that decided the 2016 college football national champion, this year’s South Carolina 4-H State Congress featured boisterous applause throughout and ended with tears of joy on Clemson University’s campus. Not that many of the youth present remembered much about the Tigers’ triumph from back in their middle school days. (photo by Clemson University)

Not that many of the youth present remembered much about the Tigers’ triumph from back in their middle school days.

The banquet’s guest speaker, Clemson alumnus and local businessman Ben Boulware, began his address by asking for a show of hands from those who’d been in Tampa, Fla., on Jan. 9, 2017, for the College Football Playoff National Championship. They weren’t difficult to count.

“Some of you in this room have absolutely no clue who I am: ‘Who is this bald guy who’s talking way too loud on this mic right now?’” Boulware joked at the 4-H State Congress awards banquet July 8 at the Madren Center.

But as most Clemson fans know, Boulware, now a self-proclaimed “has-been,” was once an All-American linebacker who helped lead the Tigers to their first national championship in 35 years, having fallen just 5 points shy the previous year.

During the regular season, Boulware’s tackle of Notre Dame quarterback DeShone Kizer at the goal line on a 2-point attempt that would’ve forced overtime in monsoon-like conditions for a night game in Death Valley is one of the iconic images in the history of Clemson football.

But while being able to walk around campus anonymously might be a new feeling for Boulware, he said it didn’t matter if any of the 4-H’ers present knew his football career — because that’s not the message he was there to deliver.

After all, he said, his football career didn’t last long after college either.

“Luckily I had a Plan B,” he continued. “There are a million reasons why (Clemson head football coach Dabo) Swinney is elite — he’s an incredible football coach and leader — but I think our program creates just good people in the community who are successful because he is so focused on ‘creating your Plan B.’ Because it’s not if football ends; it’s when. It’s going to happen.”

Boulware thought to himself that there were two things he was good at: playing football and working out. With football off the table as a career option, he took the other route. And after opening The Junkyard in Anderson in 2018 and a second location in Greenville a couple years later, Boulware and his business partner are now set to open another location in Clemson.

And he credited the work ethic honed during his football days for being able to do that.

“My rule was past performance does not equal present performance,” he said. “You have to put in the work, day in and day out. The college football world is a business; they don’t care what you did last year.”

Boulware also challenged the young people in attendance to “find some mentors” as early as possible and rely on that wisdom to help guide them.

“Find some old folk — they’re a lot smarter than you — and tap into them,” he said.

And there was some of that wisdom being handed down already at 4-H State Congress.

While the banquet serves as a recognition of the top performers around the state each year, it also ceremonially bids farewell to the outgoing crop of 4-H’ers, many of whom have been in the program since they were small children.

Maggie Thomas of Dorchester County, for example, spent more than a decade in 4-H after her family began a club in a rural community in St. George, S.C.

Now the State 4-H Teen Council President, Thomas, who has been accepted into nursing school this fall at Anderson University, said her 4-H experience has taught her the value of moments — big and small.

“Everyone is always so anxious to race to the end, to find the happily-ever-after, but 4-H helped me to realize that it’s not always about the happy ending, sometimes it’s about the story that takes you there,” Thomas said.

Thomas challenged her fellow 4-H’ers to “become the authors of your own stories.”

Interim 4-H Program Team Director Ashley Burns passed along a similar message of leadership to Boulware’s advice about putting in the work daily to those in attendance.

“True leaders do consistently what everyone else does occasionally,” Burns said. “So, I encourage you to use the words that Ben shared with you tonight to really put your practices into passion — be intentional, be disciplined and that will help you on your way to greatness — because y’all are already seeking excellence in everything you do.”

With Burns’ presentation of the Glen Krohn Award for Volunteerism, the awards portion of the banquet kicked off and boisterous applause rang out with each new name called, particularly when the four winners of 4-H’s most prestigious honors, the Presidential Tray Awards, were announced.

One of those winners, Katie McCarter of York County, said 4-H has helped her discover what her future will look like.

Through participating in the 4-H Engineering Challenge, McCarter, the 4-H Teen Council Vice President, discovered a passion for STEM (Science, Technology, Engineering and Math) and hopes to work in the future with software coding.

With all that in mind, McCarter admitted she had a difficult time making it through her closing remarks at Congress, pausing to compose herself while the audience encouraged her.

“Even though I’m aging out this year, I’m so fortunate to have one more year with all my friends that have made 4-H and relishing the moments that I will always remember,” she said.