Home » 4-H youth design their own clothes and quilts 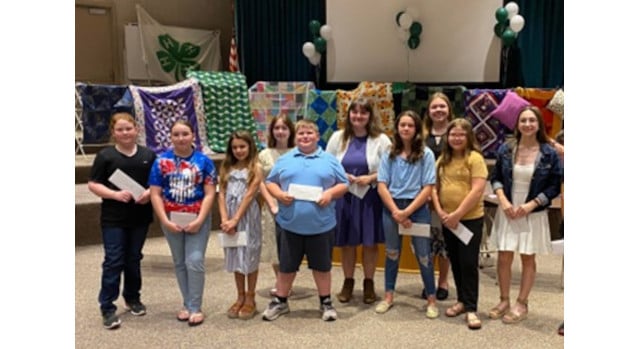 Some of the 4-H Youth at the Fashion Revue. (Courtesy Photo)

JAMESTOWN, N.Y. — Cornell Cooperative Extension of Chautauqua County’s 4-H Youth Development Program hosted another successful Annual Fashion Revue! The event took place at Jamestown Community College on May 13, 2022. After a couple of challenging years, it was nice to have an “in-person” Fashion Revue again. The event was hosted by the 4-H Clothing and Textile committee. 4-H members were evaluated on their sewing as well as their modeling abilities.

Commentators for the evening were Rachel Comstock and MacKenzy Graziano from Country Critters 4-H club and Garrett Lesch with the Canadaway club.

The Martha Carlson Memorial Award sponsored by Ethan and Nancy Johnson is given to any male sewer who has participated in the sewing project for over 3 years and has shown continual improvement in their sewing skills. This year Garrett Lesch from the Canadaway club received this award.

The Western District Fashion Revue will be hosted this year by the Erie County 4-H in August at the Erie County Fairgrounds, more details will be available at a later time. The following have been chosen to attend that event Lilianna Neal and Garrett Lesch.

How do rootstocks help tomato growers under heat and drought?