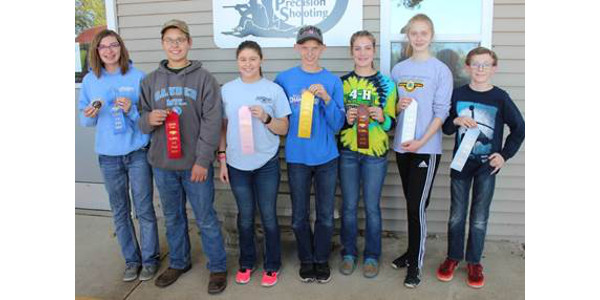 BLOOMINGTON, Ill. — Some people look at the 4-H Shooting Sports program and only see the firearms. Illinois 4-H sees a young person who has potential to grow in confidence, problem solving, teamwork, leadership and decision-making, said University of Illinois Extension Shooting Sports Educator Dan Dawson. “Shooting sports clubs are just the tools we use to make a positive difference in the lives of youth who are passionate about the challenge of shooting sports.”

One-third of the 30 participants in the smallbore division of the 2017 Illinois 4-H State Rifle Shoot came from Winnebago County. Gajda credits a deep volunteer leader pool with the county’s success. The county has nearly 20 volunteers, all screened and trained through the state’s strict 4-H volunteer protocol.

Though shooting sports in name, the club members are diverse in their projects and activities, Gajda said. “We try to present the whole picture of 4-H to our members,” she said. Club members perform many community service activities, take on leadership roles in the state 4-H ambassador and teen leadership programs, and exhibit a variety of projects outside their shooting sports projects.

Club member Krzystof Gajda was a recent delegate to National 4-H Conference where he studied the effects of climate on the planet. He returned home and inspired several of his club members to advocate for better environmental practices. These 4-H climate ambassadors are advocating for positive change.

McLean County 14-year-old Shandre Willoughby earned first place in the air rifle division. The first-time state competitor said she was nervous, especially in the rounds where competitors stand to shoot. The teen practices three times a week with her coach and dad, Kurt. The Thursday before the meet, Shandre said she hit her standing target goal of 80.

“As we drive home from shooting, we go over what I did and certain things I can do to fix it,” Shandre said. Fellow club member Paul Knipmeyer said he tries to imagine it’s just practice instead of a contest to help control the nerves. “I try not to make a big deal over it,” Knipmeyer said.

One may learn more about the McLean & Woodford County 4-H Shooting Sports programs by checking out our website at go.illinois.edu/LMW  or feel free to contact 4-H Staff at the University of Illinois Extension McLean County Office at (309) 663-8306 or Woodford Office at (309) 467-3789.

2017 a great year for pumpkins