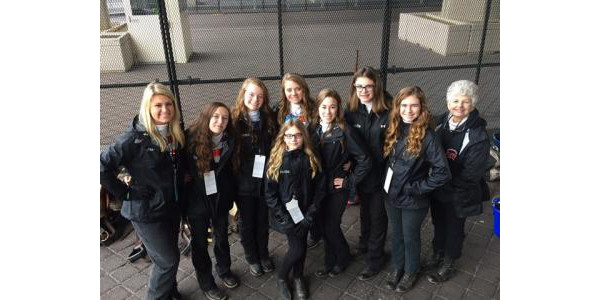 LEXINGTON, Ky. — Eight 4-Hers recently got to be a part of history on horseback. A few weeks ago, Kentucky Sen. Mitch McConnell invited the Boone County 4-H Elite Equestrian Drill Team to participate in President Donald Trump’s inauguration parade. Horses have always played a role in the parade since Thomas Jefferson’s second term in 1805.

The Presidential Inaugural Committee reported that more than 8,000 participants were involved in the parade. The team had a goal of $10,000 they needed to raise to facilitate transportation and other trip expenses. They didn’t have much time, but team members raised more than they needed through a GoFundMe page, local support and generous donations from the 4-H Council and the Kentucky Farm Bureau.

“We have been so encouraged by the support of our community,” said Susan Elslager, Boone County 4-H leader. “The extra funds we were able to raise helped with unexpected expenses along the way and we were able to reimburse some of the riders’ hotel expenses.”

As for how it felt to participate on something at this level, Elslager said the background checks and security checkpoints were exhausting at times, but worth it in the end. She said the team was impressed by the forethought of the parade committee as well.

“They really thought of everything,” she said. “There was a lot of waiting around—a lot of time for horses to get bored—but along the way the parade committee provided hay and large water tanks so the horses could freely eat and drink. It really helped to settle the horses.”

The parade began just after the swearing-in ceremony and inaugural luncheon. The parade has been a part of inauguration events since the first inauguration of George Washington.

Alyssa Mosmeier, a student at Camp Ernst Middle School in Burlington, made the trip and rode in the parade. She said she realized just how much organization goes into getting a group their size to such a monumental event.  Although it felt a bit like riding in a state-level competition, she said it was much more.

“I saw the President, and he gave us the ‘thumbs-up’ sign when we passed,” she said. “I’m really proud to be included in this once-in-a-lifetime opportunity.”

The Boone County team began eight years ago as a way to give 4-H riders an opportunity to participate in equestrian pursuits. Pam Pickett is the drill master for the team. She coordinates routines, and Eslager said she has a gift for the sport. She also rode with the team on the parade route.

“Pam is great leader,” she said. “For her, it’s all about the kids. She has a unique ability to match riders and horses together that make the best combination. The kids don’t quite grasp that they were able to participate in history just yet, but someday they will look back on this experience with Pam and be in awe.”

At 11 years old, Josie Bronk was the youngest rider on the team. Her mother Cherokee Bronk accompanied the team. She was impressed by how her daughter and the rest of the team took care of the animals and represented their home state.

“These 4-H’ers groomed and polished their horses to make sure they represented the commonwealth well,” she said. “As they trotted down historic Pennsylvania Avenue in their sequined American flag shirts, it was a proud moment to watch the patriotic group riding the same path as their forefathers had. These children shared a remarkable moment that they will share for years to come.”

“We do our best to involve the team with the community,” Eslager said. “We teach them to work as a team, not as individuals. It takes so much work to teach the riders and the horses at the same time. It’s not all fun and games, but it’s in our blood and it’s what we do.”

She said the parade participation has drawn interest from riders who may join the drill team in the future.

Gift and craft market crops up