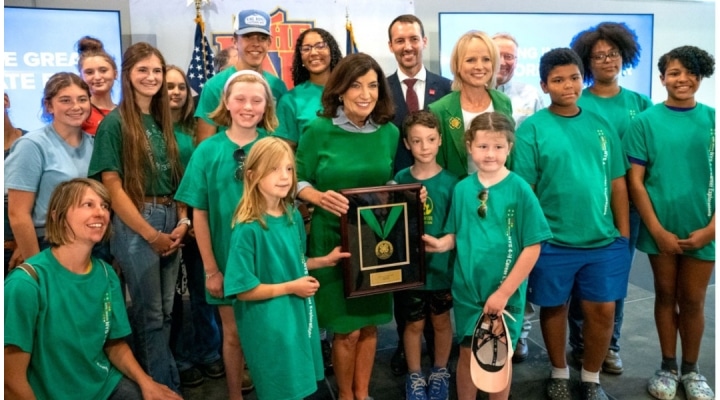 SYRACUSE, N.Y. — As a 10-year-old girl at the Erie County Fair, Kathy Hochul felt intimidated speaking before an audience.

Now, as New York’s governor, Hochul credits her first public speech – as part of the 4-H program, which is managed and operated statewide by Cornell – for instilling her with poise and self-assurance.

“I had to demonstrate how to make some healthy food,” Hochul said. “I still remember the ingredients for banana-orange frosted. I was ahead of my time with smoothies. It was a half-cup of orange juice, a half-cup of sherbet, milk and then blend it all together. And so very nutritious.”

To open the 2022 New York State Fair, the National 4-H Council awarded Hochul its highest honor, the 4-H Distinguished Alumni Medallion. The award recognizes significant career achievement and the embodiment of 4-H values – pledging your head to clear thinking, your heart to greater loyalty, your hands to larger service and your health to better living.

In 4-H’s 120-year history, Hochul is the first sitting governor to win the award.

“Gov. Hochul has certainly embodied [4-H],” said Jennifer Sirangelo, president and CEO of the National 4-H Council, who presented the award. “She shows her loyalty to the citizens of New York through her heart … no matter where they live, through her career in public service, she has put her hands to a larger service and … her commitment to all New Yorkers for their health and well-being.”

New York State 4-H is a part of statewide Cornell Cooperative Extension, which is administered jointly through the College of Human Ecology and the College of Agriculture and Life Sciences. The state office is housed at Cornell’s Bronfenbrenner Center for Translational Research.

Each New York county, including all five New York City boroughs, has a chapter. Currently, there are 170,000 active members in New York, ranging from ages 5 to 18, while more than 7 million youth participate nationwide, according to 4-H.

“Governor Kathy Hochul epitomizes what 4-H is about, in terms of having that whole picture of life,” said Andy Turner, Cornell’s statewide director of 4-H. “That’s the pledge: heart, hands, head and health. This shows that some of these early life lessons from 4-H give youth an opportunity to try new things and getting support from caring adults to guide them.”

Benjamin Houlton, the Ronald P. Lynch Dean of CALS, pointed to the clear, tangible results of Hochul’s early success in the youth program. “New York is one of the top agricultural states in the country. Having a governor who is dedicated to the four principles of 4-H means that she gets it,” he said. “As we continue to create the future through our youth, we have a governor who is supporting our activities and we know that we can do even more.

“We continue to grow food for a world in a way that protects the environment and drives our economy forward,” Houlton said. “It’s great partnership.”

“The 4-H program’s interdisciplinary focus goes hand-in-hand with the human ecology approach of addressing the multilayered influences on health and well-being,” said Rachel Dunifon, the Rebecca Q. and James C. Morgan Dean, in the College of Human Ecology. “The alumni of the program, including Gov. Hochul, are a testament to its value, and the importance of instilling young people with the skills to make the world a better place through their leadership.”

Chris Watkins, professor of horticulture and director of Cornell Cooperative Extension, beamed as the governor received the medallion. “Anytime we have light shone on the great work of cooperative extension, it is a benefit to our land-grant mission and it gives our student programs a boost,” he said. “We’re all about helping youth build skills, so that they can be successful going on to high school, college and beyond.”

So, you want to be a farmer?