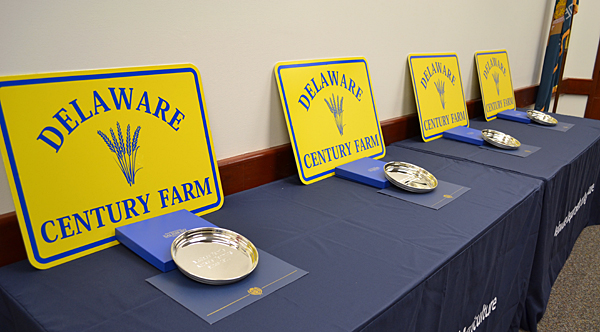 DOVER, Del. — The Delaware Department of Agriculture honored four Delaware’s farm families for their continued commitment to farming the same land for a century or more.

“Our Century Farms are extremely important and they help tell a story about the history of Delaware and about what agriculture means to this state,” said Delaware Secretary of Agriculture Michael T. Scuse. “From the early 1600’s to today, during the transitions from one type of agriculture to another, and through the many challenges our producers have faced… they have been able to keep agriculture going and continue to be the number one industry in the state.”

The Delaware Century Farm Program was established in 1987 to honor farming families who have owned and farmed their land for at least 100 years. The farms must include at least 10 acres of the original parcel or gross more than $10,000 annually in agricultural sales. Including this year’s inductees, the program has honored 143 farms throughout Delaware.

“This is one of my favorite events of the year, as we recognize families who have persevered for at least 100 years in the farming profession. I think that is truly a remarkable accomplishment,” said Deputy Secretary of Agriculture Austin Short. “Farming is hard enough year-to-year, much less for a hundred years through multiple generations. The fact that we have four families today who have achieved the Century Farm recognition — in some cases, more than a hundred years — is a terrific achievement.”

Michael and Iris McCabe and Family (Millsboro, Sussex County): The McCabe family is recognized for their 100-acre family farm located in the Dagsboro Hundred west of Dagsboro.

Garrison McCabe from Roxana purchased 100 acres in 1914 for $2,200. Mr. McCabe and his wife Martha had eight children — five sons and three daughters — and one of their sons, John F. McCabe, purchased the farm from his parents in 1918. The farm passed to John’s widow, Ella, in 1960. Upon Ella’s death in 1963, their son Clarence and his wife Anna inherited the farm. Clarence died in 1979 whereupon Anna owned the farm in entirety until her death in 2006 when the farm was purchased by their son Michael and his wife Iris, who still own the farm today. Their son Brandon, the great-great grandson of Garrison, and his family now live in the house that was built by John F. McCabe in 1920.

During the last 100 years, the McCabe farm has yielded wheat, corn, soybeans and vegetables. Additionally, the farm produced poultry, swine and cattle in the past. The McCabe family now farms over 1,200 acres in Sussex County.

Leroy and Bertha Webb of Greenwood purchased approximately 50 acres in April 1915 for $750. Mr. and Mrs. Webb had six children — three sons and three daughters — and one of their sons, Woodrow Webb and his wife Florence, purchased 48 acres of the farm from his parents in August 1960. Woodrow and Florence purchased the other two acres in December 1960 from Woodrow’s niece (she and her husband acquired the two acres earlier that year). Woodrow died in 1997 and Florence transferred 2 acres to Mark Mihalik (their grandson). Florence transferred an additional five acres to Mark in 2006 and the remaining acreage in 2017; therefore Mark now owns the entire original farm.

During the last 100 years the Mihalik-Webb farm has yielded corn, soybeans, vegetables and timber. Mark and his family now live on the farm as well.

Allison Henry Mumford purchased approximately 50 and 120 square perches on Jan. 2, 1918, for $1,218.50. In May 1918, Mr. Mumford purchased an adjoining farm totaling 29 acres and 42 square perches for $877.88. Mr. Mumford and his wife Minnie had two children — Helen and Roland — and Roland and his wife Myrtle acquired the farm in 1947. Roland and Myrtle’s daughter, Connie Truitt, acquired Roland’s half-interest in the farm upon his death in 1995 and her mother’s half-interest in 2002. Connie and her husband Craig now own the farm as part of Mumford & Truitt Farms, LLC.

During the last 100 years the farm has yielded corn, soybeans, wheat, cantaloupes, strawberries, sweet corn and watermelons. The farm also produces broilers. In addition to the poultry houses, the buildings on the farm include a former livestock barn, pole shed, machinery shed, farm shop, old corn crib and the house where Connie and Craig now live. Another interesting fact is that Connie’s father, Roland Mumford, operated a Massey Ferguson dealership on the farm from 1958 to 1963.

Thomas and Elizabeth Warren and Family (Georgetown, Sussex County): The fourth family to honor today with the Century Farm Award is the Warren family for their 112-acre family farm located in the Nanticoke Hundred west of Georgetown.

In 1871, Hiram Isaacs acquires 122 acres and 23 square perches from his father’s (Minos Isaacs) estate for $704.55. Although it has not been verified, it is believed that Minos Isaacs acquired this farm in 1846 or perhaps earlier. Hiram and his wife Maria sold the farm in 1908 to his sister Sarah and her husband Elzey Wilson. In 1912, Elzey and Sarah sell the farm to their son Joshua Wilson and his wife Anna. Joshua died in 1957 and Anna in 1972, whereupon it transferred to their son Sudler Wilson. Following Sudler’s death in 1997, the farm was managed by his son Nelson as part of Sudler’s estate and subsequently 112 acres of the original farm was transferred to Nelson’s son, Thomas, in 2002.

During the last 100 years the Warren farm has yielded wheat, corn, soybeans and timber. Currently, Thomas and his wife Liz and their children live on the farm where their children raise sheep. Elzey and Joshua Wilson also operated a sawmill on the farm in the early 1900s.

Delaware Century Farm families receive a sign for their farms, an engraved plate and legislative tributes. According to Brandon McCabe, “We are going to be super-proud to put that sign out front. It shows the county and the area that we have been here for a hundred years and we are going to be here for years into the future. As long as it’s financially feasible, we are going to keep doing it.”