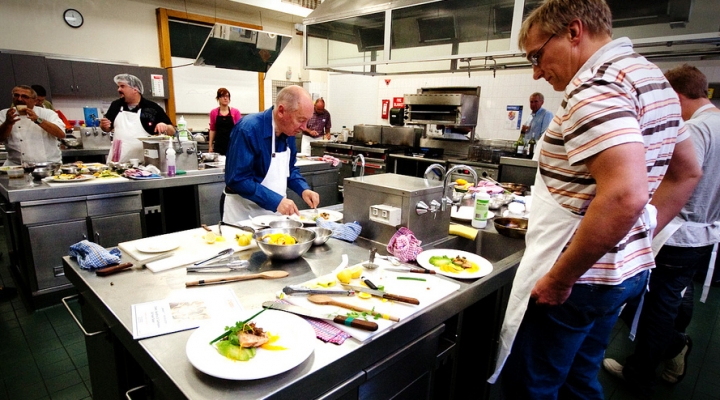 “This project will broaden access to fresh food, provide employees with skills they need for future success, and support efforts to reduce poverty and end hunger across the region,” Governor Cuomo said. “Our investments in community health and job creation are helping to move the Finger Lakes Forward.”

The food hub’s new community kitchen will work to build community health and nutrition and to reduce poverty through targeted job creation in the culinary industry. The project will retain Foodlink’s 77 employees and create up to 34 new jobs over the next five years. Additionally, its Culinary Career Training program will also train 20 to 30 individuals by 2019 at the new facility located at 1999 Mt. Read Boulevard in Rochester.

Foodlink Executive Director Julia Tedesco said, “Our founder, Tom Ferraro, would be so proud of this day, and this amazing facility. The Foodlink Kitchen truly represents our commitment to building the health and wealth of this community and is a tribute to Tom’s innovative spirit and vision for ending hunger in our region.”

Several area charter schools, after-school programs and extended-day sites partner with Foodlink to provide healthy meals for thousands of Rochester’s low-income children. During the summer, the kitchen serves Summer Meals sites and other local camps and programs. Foodlink will also use this new space to develop a one-of-a-kind work experience program. Wegmans Food Markets lent its expertise to aid with the kitchen design, and continues to work with the agency to help develop the kitchen’s culinary training program.

The Foodlink Kitchen project aligns with the Finger Lakes Forward regional economic development plan as well as the Rochester-Monroe Anti-Poverty Initiative. Access to food plays a central role in community development, poverty reduction and economic mobility for the region.

Empire State Development President, CEO & Commissioner Howard Zemsky said, “This new facility will not only increase the number of healthy meals Foodlink prepares and serves daily to the City of Rochester’s children, this project will also feed the local economy by fostering workforce development in the region.”

Finger Lakes Regional Economic Development Council Co-Chairs Wegmans Food Markets Chairman Danny Wegman and Monroe Community College President Anne Kress said, “This project will go a long way to increasing access to fresh and healthy food for people in need throughout the region. The Finger Lakes Forward economic development plan is laser focused on helping those who are living in poverty to find a way out through employment. This program will help connect individuals to training and hobs in the growing agriculture and food processing sector.”

Vinnie Esposito, Empire State Development Finger Lakes Regional Office Director said, “For many years, Foodlink has served as the centerpiece in the battle against hunger in the Finger Lakes region. We are so honored to help this crucial institution extend its reach even further.  The investment that facilitated the expansion of the Foodlink Community Kitchen will  serve to create a  hub of regional agricultural activity and job development resulting in a healthier community from which we will all benefit. “

State Senator Joe Robach said, “Since 1978, Foodlink has played a pivotal role in working every day to end hunger and leverage the power of food to build a healthier community. With today’s ribbon cutting of their state of the art community kitchen, Foodlink will have an even greater ability to take the resources of our community and harness them to create a healthy, hunger free community.”

Rochester Mayor Lovely Warren said, “There is an ancient proverb that says: ‘If you give a man a fish, you feed him for a day. If you teach a man to fish, you feed him for a lifetime. By creating the Foodlink Community Kitchen, the people at Foodlink are proving that they can do both. An organization with a long history in the fight against hunger is now expanding the scope of that fight by helping our citizens emerge from poverty by learning to work in the food industry. Foodlink is a valued partner in our community, and I am grateful for all they do for our citizens. They are helping us create jobs, safer more vibrant neighborhoods and better educational opportunities for our citizens.”

County Executive Cheryl Dinolfo said, “The newly opened Foodlink Community Kitchen is part of a crucial effort to combat hunger in our community while also bringing job opportunities to local residents. We know that food access is critical for families who are working to get out of poverty so I am proud to see Foodlink embark on this mission.”

For more about Foodlink and the new kitchen click here.

Today’s announcement complements “Finger Lakes Forward,” the region’s comprehensive blueprint to generate robust economic growth and community development. The State has already invested more than $3.4 billion in the region since 2012 to lay the groundwork for the plan – investing in key industries including photonics, agriculture, and food production, and advanced manufacturing. Today, unemployment is down to the lowest levels since before the Great Recession; personal and corporate income taxes are down; and businesses are choosing places like Rochester, Batavia and Canandaigua as a destination to grow and invest in.

Now, the region is accelerating Finger Lakes Forward with a $500 million State investment through the Upstate Revitalization Initiative, announced by Governor Cuomo in December 2015. The State’s $500 million investment will incentivize private business to invest well over $2.5 billion – and the region’s plan, as submitted, projects up to 8,200 new jobs. More information is available here.​