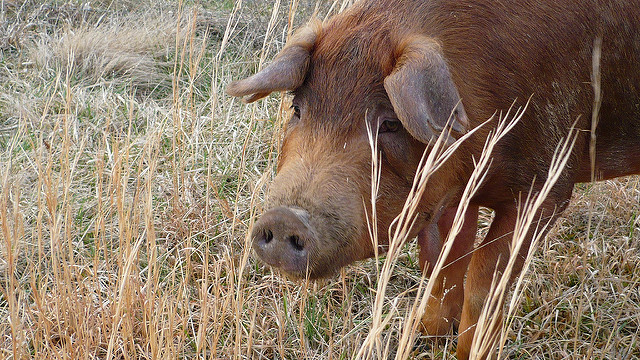 Before the virus was detected in September, hog cholera was last seen in the country in Kumamoto Prefecture in 1992, when five pigs were infected. Japan declared the virus eradicated in 2007. (Mark Whitby, Flickr/Creative Commons)

TOKYO — A local government in central Japan said Wednesday a hog cholera infection has been found at a public research institute — the third such case since the first outbreak in decades in Japan was reported earlier this year.

The latest case in the city of Minokamo, Gifu Prefecture, follows the first swine fever infection since 1992 reported at a pig farm in September and another at a public livestock center park in November, both in the city of Gifu.

The prefectural government began culling hogs at the research institute, which breeds about 500 pigs for the development of brand-name pork products, after two animals tested positive for the virus that has a high fatality rate. Hog cholera does not affect humans even if an infected animal is consumed.

The outbreak at public facilities sparked criticism of the local authority, which is at the forefront of measures to protect livestock.

At a meeting held Wednesday to respond to the outbreak, farm minister Takamori Yoshikawa said, “It is extremely serious that the infection was detected at the prefectural institute. It will have a huge impact.” The minister said he may visit Gifu to deal with the outbreak.

Gifu Gov. Hajime Furuta apologized at the meeting, saying, “We are really sorry that the outbreak occurred at the prefectural facility, which is supposed to have well-prepared preventive measures.”

Deputy Gov. Takanori Kawai told reporters, “We made an effort with our preventive measures at our core facility for the livestock industry, but the positive test result indicates there was a failure in the process.”

According to the prefecture, facility staff found four pigs had lost their appetite on Monday. In a test conducted by the central government, infections were confirmed in two of the pigs on Wednesday.

There have been 63 detected cases of infected wild boars in four municipalities neighboring Minokamo.

The virus detected in the two pigs at the research institute matched the type found in the first two cases and the wild boars.

In the outbreak on Sept. 9, the Gifu prefectural and city governments confirmed several pigs had grown weak, but they were initially wrongly diagnosed as suffering from heat exhaustion. The livestock center park, where a swine flu outbreak occurred on Nov. 16, was found to have violated hygiene management rules.

The third outbreak has stirred criticism from farmers and some experts.

“The administration has been treating these outbreaks too lightly. It’s incredible that this has happened again,” said a Gifu hog farmer.

He noted that even private animal husbandry farms follow hygiene rules as a matter of course, referring to the second outbreak at the park, which was found not to have strictly observed rules such as wearing specifically designated clothing at each pig pen.

“I can’t believe that the infections occurred in a prefectural facility,” said a 70-year-old neighbor of the institute who attended a local briefing session. “(The facility) was not very conscientious” about preventing the epidemic, he said.

“It is possible that even within the same prefectural organization, awareness differed between the department that gave guidance to farmers on animal control and the department that encouraged production,” said Masuo Sueyoshi, head of the University of Miyazaki’s Division of Prevention and Control for Animal Diseases.

Before the virus was detected in September, hog cholera was last seen in the country in Kumamoto Prefecture in 1992, when five pigs were infected. Japan declared the virus eradicated in 2007.