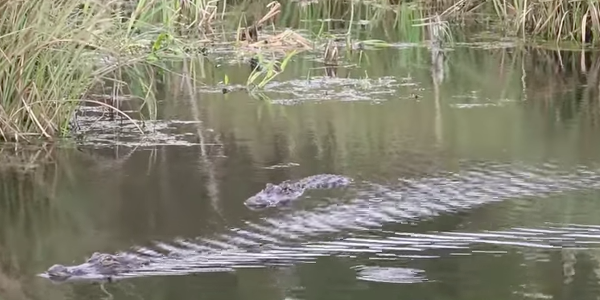 Research by wildlife biologists from Clemson University and the Tom Yawkey Wildlife Center near Georgetown is shattering conventional scientific understanding about American alligator growth and reproduction. (Screenshot from video "Uncovering mysteries of the American alligator")

For years, it was believed that American alligators continued growing in length until they died, what is called “indeterminate growth.” But a 35-year study of a protected alligator population at the Yawkey Center on the South Carolina coast has found that male and female alligators exhibit “determinate growth.” In other words, they stop growing at some point after they reach sexual maturity.

Additionally, females are reproductive far longer than previously thought, 46 years past the onset of sexual maturity in one case, the study found.

The study was performed by retired Yawkey Center manager and South Carolina Department of Natural Resources wildlife biologist Phil Wilkinson, Clemson University Baruch Institute of Coastal Ecology and Forest Science wildlife biologist Thomas Rainwater and three colleagues with the Florida Fish and Wildlife Conservation Commission. The team published its findings in Copeia, the journal of the American Society of Ichthyologists and Herpetologists.

“We began by simply trying to determine the best way to count alligators along the South Carolina coast and monitor the population in a scientifically valid way,” Wilkinson said. “We went about looking at nesting as an index of the population. If you know the sex ratio, the adult ratio and that the females lay a clutch of eggs about every third year, you can begin to use those nests as an indicator of what the real population is.”

In subsequent years, Wilkinson observed many of the Yawkey gators that were already marked from previous research captures.

“We would ride around the property during spring basking time when there are a lot of alligators out and see that a lot of them were marked already. So we knew there was a good chance we could recapture a lot of them and see how much they had grown,” Wilkinson said.

“The dogma for years has been that crocodilians and reptiles in general grow in length until they die,” Rainwater said. “Our study shows that, at least at Yawkey, adult alligators stop growing before they die. We have animals that Phil first caught and tagged back in 1981 that we recaptured in 2016 and they are still exactly the same length they were 35 years ago.”

The captured alligators ranged in size from 7 feet to 9 feet 7 inches for females and 10 feet 8 inches to 12 feet 6 inches for males. Rainwater and Wilkinson estimate, on average, the male alligators stopped growing sometime between 25 and 30 years of age.

But how do scientists explain giants like the huge gator nicknamed Hunchback that was spotted in Florida in January?

“Like people, males can top out and not be very tall or there can be a Wilt Chamberlain in the crowd,” Wilkinson said.

Wilkinson and Rainwater also found that female alligators can continue producing viable clutches of eggs for far longer than was previously believed. Some female Yawkey alligators pushing 70 years old are still nesting and have large clutches of fertile eggs. One female alligator in the study is still reproducing at least 46 years after reaching sexual maturity.

This flies in the face of conventional science showing that middle-aged females in the prime of their lives have the highest fertility rate.

“We’re seeing old animals putting out the same number of viable eggs as they did 35 years ago,” Wilkinson said. “I like to think of them as being like a big old oak tree — they drop acorns every so often when the weather’s right, and then one day they don’t, and that’s the end of it.”

Wilkinson and Rainwater say the uniqueness of the Yawkey Center has perpetuated the length of the study and made the alligator discoveries possible.

The Yawkey Center consists of North, South and Cat islands and encompasses 24,000 acres. The center was willed to the state in 1976 by the late Thomas A. Yawkey and is owned and managed by the South Carolina Department of Natural Resources through funding by the Yawkey Foundations. The alligator study was conducted on the South Island and Cat Island portions of the center.

“Yawkey alligators have been unhunted for almost 100 years. No other place that I know of has a dataset this robust and this long term. You can’t really know how long wild alligators live and grow unless you have an animal that was caught 20 or 30 years ago and you catch it and measure it again,” Rainwater said.

“We’ve been able to work with the same animals and they’re protected,” Wilkinson added. “The fact that they’re on a sanctuary means that the world has to leave them alone. It’s like we have a laboratory setup, but it’s in the wild.”

Clemson and Department of Natural Resources researchers have been collaborating on wildlife research at Yawkey since 1994, including research and education efforts that focused on sea turtle conservation and coyote ecology and led to the development of a system that reduced coyote destruction of loggerhead sea turtle nests and predation of eggs on the refuge from 60 percent to less than 6 percent.

Rainwater is part of a team of Clemson researchers that is trying to understand more about South Carolina alligator ecology. Clemson University doctoral candidate Abby Lawson is in the fourth and final year of an alligator tracking study that uses GPS satellite transmitters to monitor alligator movements in an effort to create a more accurate way to assess their numbers. Lawson’s work shows water level manipulations in South Carolina’s freshwater impoundments appear to influence alligator movements. The impoundments are managed to provide habitat for wintering waterfowl.

Rainwater says the Clemson alligator research could have broad implications for how alligator populations at the northern limits of their geographical distribution — which includes South Carolina — are managed.

“Abby can use the data we’ve collected on growth and longevity to help determine survivability of animals in the wild and how long animals remain in the population. Once the work is complete, we can then share those data with the Department of Natural Resources and other management agencies,” Rainwater said.

“The Yawkey study provides a unique opportunity to estimate baseline survival and growth rates in a protected population. We can compare our findings to hunted areas to better evaluate how harvest may impact alligator populations through changes in survival, reproduction and length differences,” Lawson added.

There are still many mysteries to unlock about alligators, according to Wilkinson. For example, how do they signal to each other when they find an abundant food source?

“Sometimes there can be a drawdown in an impoundment, which congregates fish in great numbers. When there is that type of food abundance, you can see 100 gators there eating. Where did they all come from? How do they know where to go? One time we were flying in a helicopter over a marsh when that was going on, and they were coming to that impoundment from every direction. It’s like they were communicating in some way,” Wilkinson said.