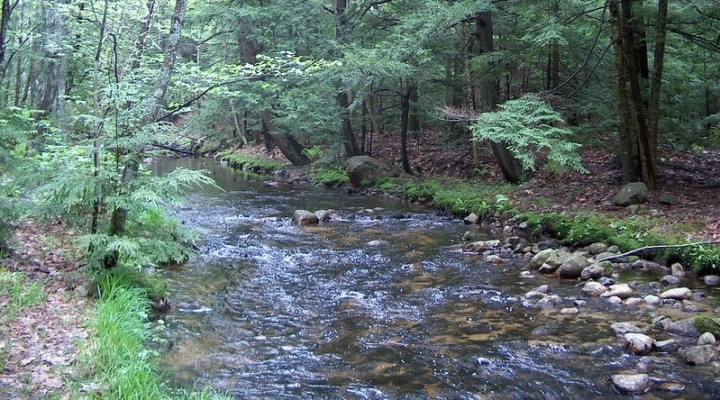 The “Bay of Fundy Aquatic Connectivity” project was unveiled during the Atlantic Salmon Ecosystems Forum in Orono, on, Wednesday, Jan. 15, as an opportunity to restore habitat access in more than 300,000 square acres in eastern Maine.

Under the “Bay of Fundy Aquatic Connectivity” project deteriorating fishways and undersized culverts that block fish such as sea-run smelts and sea-run alewives from historic spawning and nursery habitat will be replaced on roads in selected municipalities in Washington County. The watersheds included in the project are the: Lower St. Croix River; Dennys River; Pennamaquan River; Bocabec River-Frontal Passamaquoddy; Cobscook Bay-Frontal Passamaquoddy; and the Grand Manan Channel.

“Restoration of sea-run fish is vital to our state’s environment and economy,” said Maine Department of Marine Resources Commissioner Patrick Keliher. “Our rivers in Downeast Maine have great potential. Improving passage and habitat for species like American eels, river herring and Atlantic Salmon will provide significant ecological benefits, recreational opportunities, and economic value throughout the region.”

“Many different aquatic species face increasing threats due to climate change and development. This grant will help us improve lake and stream connectivity in several Downeast watersheds by restoring access to habitat for species such as brook trout, while also laying the foundation for continued economic growth in the region while protecting the health of Maine’s waters and fish,” said Department of Inland Fisheries and Wildlife Commissioner Judy Camuso.

Currently, diadromous fish (fish that spend portions of their life cycles partially in fresh water and partially in salt water) in Maine only have a fraction of the historic spawning and rearing habitat accessible that is critical to the persistence of four National Oceanic and Atmospheric Administration (NOAA) Species of Concern (American eel, alewife, blueback herring, and rainbow smelt) and to federally endangered Atlantic salmon. Without accessible habitat, fish cannot grow or reproduce, resulting in reduced fish populations and overall negative effects to watershed health.

“We anticipate that this project will not only restore habitat access in these watersheds, but will have positive impacts to the Downeast economy,” NRCS State Conservationist Juan Hernandez explained. “Whether it is for construction jobs at the selected sites or having benefits to communities and industries that depend on fisheries for commercial and recreational purposes, it can be ecologically – as well as economically – beneficial to Downeast Maine.”

Restoration of habitat access will also be important for the project’s lead partner, the Passamaquoddy Tribe.  Recreational and commercial fishing has been a culturally defining activity for generations of Native Americans who rely on the watersheds for sustenance and outdoor recreation, and Passamaquoddy lands – including Pleasant Point Reservation – are located directly in the project area.

Major funding for the “Bay of Fundy Aquatic Connectivity” project is provided under the NRCS’s Watershed Protection and Flood Prevention Act (PL 83-566).