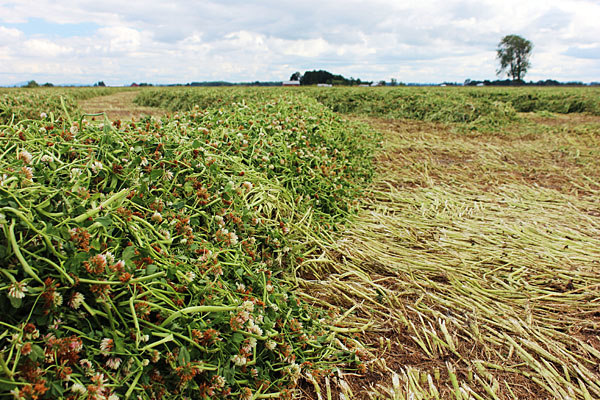 Forage yields of 20 tons per acre are obtainable when the right variety of a species is selected. (Grassland Oregon)

SALEM, Ore. — Whether you want to grow more homegrown feedstuff without increasing acreage, improve soil structure, add organic matter into the ground, increase soil fertility or all the above — cover crops are an effective and quick way to achieve your forage goals.

Cover crops are any crops not considered a cash crop as they are not harvested for a sellable product. Once cover crops are utilized within a forage system, such as overseeding a berseem clover into an alfalfa field, they become forage applications. Depending on the species and quality of variety used, you can significantly increase yields and quality by taking advantage of the soil structure improvement, added biomass and even free nitrogen fixation traits some cover crops provide.

One cost-effective and quick way to turn around tired grassland is by adding different plant species, such as legumes, into pasture through overseeding.

Just because grass is green and growing doesn’t mean it’s performing well. Often, the biggest issue found in pastures is poor fertility due to not receiving adequate nutrients resulting in grass to be barely limping along. Nitrogen fixing legumes such as balansa or berseem clovers are a great way to get an immediate bang for your buck in forage yield and quality increases.

Whether being grown as a monoculture, with small grains or in a corn silage rotation, balansa clover’s nitrogen fixation and weed control makes it a viable option for silage — with forage yields of 20 tons per acre being obtainable with the right variety.

Using a variety that can handle extreme environmental conditions such as sub degree temperatures without snow cover is essential for increasing growing seasons and utilizing flexible seeding options. If you want to take multi-cuts or utilize it within a grazing rotation, the variety also needs to be later maturing.

Wanting to give your hay system an extra kick? Results from a two-year study found a 20 percent berseem clover to 80 percent alfalfa ratio increased dry matter, crude protein and carbohydrate yields. The synergistic relationship between these two species and their similar phenotype and feed value makes them perfect for hay production.

You know the old saying of “garbage in, garbage out?” This same principle applies to choosing a cover crop. Years of research go into breeding different varieties which means you should always select for varieties of a specie based on quality traits to capture the full benefits. For example, just because one variety of balansa clover has cold tolerant traits or is later maturing doesn’t mean every variety of balansa clover has those same traits.