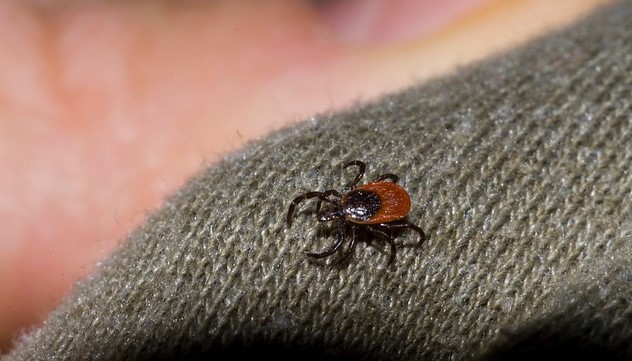 "It was welcome news to hear that funding for Lyme disease research and prevention was restored. Far too many New Yorkers are impacted by tick-borne disease," said Dr. Joshua Ginsberg, President of Cary Institute of Ecosystem Studies. (oliver.dodd, Flickr/Creative Commons)

ALBANY — Last week, the New York State Senate authorized $250,000 to address Lyme Disease and other tick-borne illnesses as a result of strong advocacy by Senator Jen Metzger, who represents the Hudson Valley and Catskills regions, which have the highest incidence of Lyme disease in the state.

The resolution of the State Senate authorizes $100,000 for continued support of the The Tick Project, a five-year research program of the Cary Institute of Ecosystem Studies to determine whether neighborhood-based prevention can reduce human cases of Lyme and other tick-borne diseases. In addition to the $100,000 awarded to the Cary Institute, grants of $50,000 were awarded to the University at Stony Brook, for research; Cornell Cooperative Extension, for education and outreach; and Columbia Medical Center’s Lyme and Tick Borne Disease Research Center.  The funds were secured as part of a budget appropriation targeted to general public health programs that had been included in the state 2019-2020 budget.

“This funding will help support institutions and organizations that are doing invaluable work advancing our understanding of Lyme and ways to prevent it, as well as educating the public, which is one of the best forms of prevention,” said Senator Metzger who has had the disease five times. “This is a public health crisis and it needs to be treated like one.”

Once confined to the Hudson Valley and Long Island, in recent years the geographic spread of Lyme has rapidly increased, in part due to the impacts of climate change which has extended the range and life-cycle of ticks. According to the Centers for Disease Control and Prevention, Lyme disease is the fastest growing vector-borne infectious disease in the United States with the New York State Department of Health (NYS DOH) reporting that over 20,000 New Yorkers have Lyme disease.

“It was welcome news to hear that funding for Lyme disease research and prevention was restored. Far too many New Yorkers are impacted by tick-borne disease.” said Dr. Joshua Ginsberg, President of Cary Institute of Ecosystem Studies. “Funds dedicated to Cary Institute will help support The Tick Project, a five year initiative testing environmental interventions with the potential to reduce Lyme disease in neighborhoods. The project, now in its fourth year, is a collaboration with Bard College, the Federal Centers for Disease Control, the New York State Department of Health, and the Dutchess County Department of Behavioral & Community Health.”

Julie Suarez, Associate Dean of the College of Agriculture and Life Sciences at Cornell University said, “I’m so pleased that Senator Metzger was able to secure funding for Cornell Cooperative Extension’s IPM “Don’t Get Ticked NY” program.  This educational program provides tools everyone can use to minimize risks posed by ticks. The additional funding will allow Cornell to continue surveillance for ticks in high risk areas like our schools, ensuring that we know what type of ticks are present in the environment which helps identify the risks of tick borne disease transmission to the public and medical providers. I applaud Senator Metzger for her thoughtful leadership.”

In related legislation, Metzger introduced a bill, passed unanimously by the State Senate, directing the Department of Agriculture and Markets to conduct a public awareness campaign focused on the farming community, with an emphasis on helping farmers and farm workers take preventative measures, recognize symptoms, and determine available treatments.

Keep off the grass!