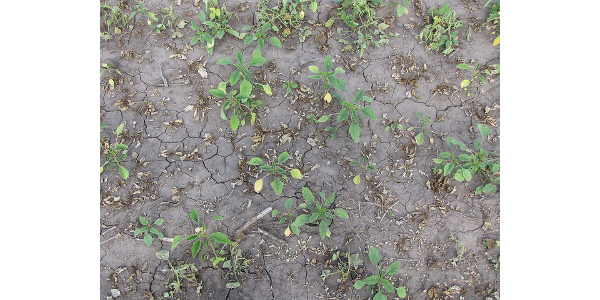 The Palmer amaranth weed has increasingly become resistant to the herbicide, glyphosate. Shown is an area where other weeds were killed by glyphosate but Palmer amaranth survived. (Courtesy of K-State Research and Extension)

HAYS, Kan. —  A Kansas State University researcher is reporting the first-ever study confirming that Palmer amaranth has developed resistance to the herbicide 2,4-D, findings that may signal an important step in developing future controls for the pesky weed.

Vipan Kumar, a weed scientist at the Agricultural Research Center in Hays, said that since 2015 a few farmers had reported poor control with 2,4-D, but until now, researchers were not able to confirm the resistance levels to 2,4-D in Palmer amaranth.

“Historically, Palmer amaranth was not a problem weed in western to central parts of Kansas, but over the past 10 to 15 years, it has become a major problem and it is present in all crop situations, and even in non-cropland situations,” Kumar said.

Palmer amaranth is extremely aggressive and thus considered the No. 1 weed problem in U.S. agriculture. It is commonly found in Kansas cropping systems and negatively affects soybean, corn, sorghum, sunflower, cotton, wheat, and fallow fields. It is also a serious problem in wheat stubble.

Kumar and his research team have recently tested one strain of Palmer amaranth – known as a biotype – and the results, Kumar says, are sobering.

That biotype has been confirmed with low levels of resistance to 2,4-D, as well as resistance to glyphosate (Roundup PowerMax), chlorsulfuron (Glean), atrazine (Aatrex), and mesotrione (Callisto).

In addition, Kumar said the biotype showed less sensitivity to fomesafen (Flexstar) herbicide, a commonly used herbicide in soybeans. He added that more research is underway to confirm if this biotype has developed resistance to fomesafen.

“This discovery confirms the first case of 2,4-D-resistant Palmer amaranth biotype that has also developed multiple resistance to four other herbicide modes of action,” Kumar said.

“We have been seeing a lot more populations with multiple resistance, especially with glyphosate, atrazine and HPPD inhibitors. There is increasing concern about Palmer amaranth’s ability to resist multiple modes of action.”

That situation has left farmers with few options to manage the weed.

“I would recommend growers use some of the pre-mixes, or tank mixes, that are still effective to control those biotypes so that they don’t get into seed,” Kumar said, noting that one female Palmer amaranth plant can produce as much as one-half million seeds.

“In addition to using effective herbicide programs, growers should look at crop rotation as a foundational practice of weed control. Grow those crops that are highly competitive with Palmer amaranth and try to grow some cover crops if you can in the fallow land. Don’t leave fallow – that’s the weakest link in this whole system where these weed species have been gaining resistance.”

Kumar also suggests that farmers consider pre-emergent herbicides, depending on the crop being grown.

“Including PRE herbicide options can help growers manage some of these multiple-resistant weed biotypes, and delay the development of resistance in this weed,” he said.

Kumar’s research group is currently studying about 200 biotypes of Palmer amaranth collected in Kansas fields to determine the extent of multiple resistant Palmer amaranth throughout the state. He said the group expects to continue their work well into the future.

“My idea is to determine the distribution of these multiple resistant Palmer amaranth biotypes in Kansas, and based on that biological information, what we can do in terms of alternate strategies to manage this problem weed in a cost-effective manner,” he said.

“If we are losing these tools, like 2,4-D or glyphosate, which are the key tools to control these weed species, then this is going to be economically expensive for growers. So we have to bring more tools into our toolbox to tackle these problems.”

Kumar’s findings have been published in the journal, Pest Management Science. The article, titled “Confirmation of 2,4‐D resistance and identification of multiple resistance in a Kansas Palmer amaranth (Amaranthus palmeri) population, is available online.