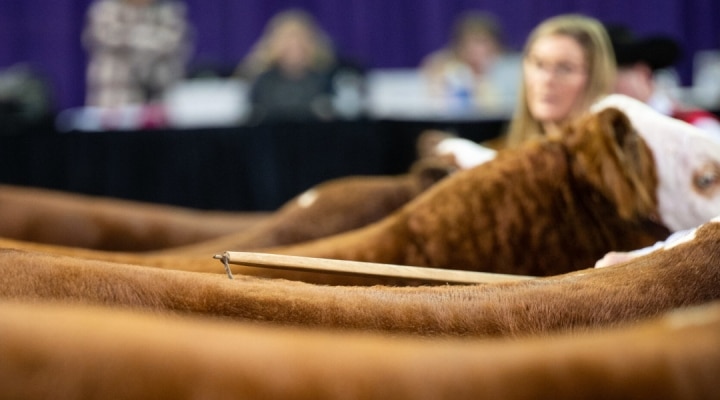 KANSAS CITY, Mo. — The 2023 Herdsman of the Year will be announced at Cattlemen’s Congress, Jan. 7. The winner will be recognized prior to the selection of the champion Hereford females. A link to vote for the 2023 Herdsman will be emailed to exhibitors at the email address submitted with their Cattlemen’s Congress entries. Exhibitors are allowed one vote per an email, and votes must be submitted by 11:59 p.m., Jan. 6. Please submit your votes early. Thank you to this year’s Hereford Herdsman selection committee: Bobby Singleton, chairman; Robyn Samsel, Barber Ranch; Alyssa Copeland, Copeland and Sons Herefords; and Jacob Wolfrey, Grimmel Girls Show Cattle. This year’s nominees are Breck Debnam, Ty Krebs, Kyle Lemmon, Richie Oakes and Garrett Post.

Breck Debnam started his career as herdsman at Innisfail Farm in Madison, Ga., in 2018. Innisfail Farm runs 150 registered cows along with an aggressive embryo transfer program. In 2021, with Breck’s help, Innisfail began a female production sale in conjunction with Mead Cattle. They also market 50 bulls a year through ‘The Source’ bull sale and private treaty. Breck attended Black Hawk East College and Western Illinois University, where he was a member of the livestock judging teams at both institutions. During his time in college, he spent a considerable amount of time at Lowderman Cattle Co. and was blessed with some great mentors in the cattle industry. Breck takes care of the day-to-day operations at Innisfail: show and sale cattle management, chores and rotational grazing, as well as AI and calving. The operation is implementing a C-Lock system this year, which will add Dry Matter Intake to the list of the many data points they measure throughout the year. Under Breck’s management, Innisfail has campaigned champion females at the Southeast Regional, Georgia National and Dixie National shows. In 2020, they had the high-selling bull in the Mile High Night Sale. In 2021, the operation had the southeast region horned show heifer of the year. Breck has also had the opportunity to judge many state and regional shows the past few years. In the coming years, Breck hopes to continue to be more involved in customer relations and service, including assisting in show cattle fitting and nutrition, helping bull buyers market their feeder cattle and make educated, data-driven decisions to turn their programs in a more profitable direction.

Ty Krebs, Gordon, Neb., oversees all aspects of his cattle operations — Krebs Ranch and Krebs Cattle Co. — with his wife, Kaleigh, and his children, Sage, Kynsleigh and Kashlyn. The family runs approximately 700 registered cows and markets bulls through their annual bull sales each February and November. They also market cattle and frozen genetics in other regional and national sales. His children attend 12 to 15 shows annually.Ty judged livestock in junior college before transferring to Oklahoma State University, where he worked in the Purebred Beef Unit with show and sale cattle and on the range with the cowherd overseen by Cindy Pribil and Joel Birdwell. While in college, he was able to get experience working at national shows and sales. Ty’s children reintroduced Hereford cattle to the Krebs family’s operation. The first Hereford cattle were run by Ty’s great-grandfather. Ty and his family purchased Hereford females in 2011. Since then, the family has continued to acquire top females from around the country. He considers himself fortunate to help his kids earn several regional and national championships over the years. Ty hopes to leave the operations and the breed in better position for the next generation to be successful and enjoy.

Kyle Lemmon
Lemmon Cattle Company
Kyle Lemmon, Manchester, Md., owns and operates Lemmon Cattle Co. alongside his wife, Nicole, daughter, Blakely, and son, Kashton. Kyle’s passion for the Hereford breed began at 9 years old; since then, he has focused on raising high-quality cattle. He believes the Hereford industry has incredible value and is honored to be a part of the breed. He spends countless hours in the barn, raising and managing his herd and completing day-to-day operations. Over the last decade he has devoted considerable time to studying genetics and matings to breed elite females and influential bulls. Kyle has been

successful at some of the largest national shows, including the National Western Stock Show (NWSS), North American International Livestock Expo (NAILE), Keystone International Livestock Expo (KILE) and VitaFerm® Junior National Hereford Expo (JNHE), along with exhibiting previous show heifers and show bulls of the year. Kyle and his family bred and exhibited the 2022 KILE third overall bull and champion Hereford bull, along with the 2022 Maryland State Fair supreme champion bull and champion Hereford bull. Additionally, Kyle was named the 2022 premier breeder at the KILE and Maryland State Fair. Lemmon Cattle Co. had numerous division champions in 2022 at the JNHE, American Royal and KILE. Additional highlights include the 2019 NAILE reserve champion Hereford bull and the 2019 KILE reserve champion bull. He also bred the 2020 NWSS reserve champion polled Hereford female. Kyle’s work ethic, respect, integrity and accountability are second-to-none. He ensures his customers have the best experience in the showring and provides them with great genetics to make exceptional breeding pieces. Kyle is humbled to be nominated for Hereford Herdsman of the Year.

Richie Oakes, Taloga, Okla., owns and manages Vanderwork Herefords with his wife, Marylu, and brother-in-law, Scotty. Richie oversees sire selection and AI, and he also manages the show string. Previously, he and Marylu ran a cattle fitting serviceand exhibited cattle nationwide. Richie graduated from the agricultural education program at Oklahoma State University, where he was a member of the livestock judging team. As a former agriculture teacher in Yukon and Clinton, Okla., Richie has always had a passion for preparing cattle for the showring and youth for life. Richie also involves himself with many aspects of national and Oklahoma cattle shows. For the last 21 years, Richie has been the beef superintendent for the Oklahoma Youth Expo (OYE). He has also served as a general livestock superintendent for the Oklahoma State Fair and Cattlemen’s Congress. Richie is a two-time past president of the Oklahoma Hereford Association (OHA). He has raised and exhibited several national show winners along with the national show bull of the year, and he was named the OHA breeder of the year twice. Richie was also named an OYE show honoree by the Sirloin Club of Oklahoma and is a past president of the Oklahoma Angus Association. Richie has also judged numerous national shows. He hopes to keep building, fitting and grooming better cattle each year.

Garrett Post, Shabbona, Ill., grew up showing Hereford cattle. He graduated from Black Hawk East College with his associate degree before transferring to Oklahoma State University and graduating in 2018 with a degree in animal science. Garrett began working at DelHawk Cattle Co. in 2010 and became a fulltime employee in 2018 after graduating from college. When DelHawk Cattle Co. transitioned to Hawk Livestock in the summer of 2019, Garrett continued his work with the operation. Garrett currently assists with the day-to-day operations at Hawk Livestock, and he works with the show and sale cattle. Recently, Hawk Livestock raised the grand champion polled and horned females at the 2022 JNHE. Hawk Livestock utilizes embryo transfer and In-Vitro Fertilization programs extensively. Garrett enjoys watching and learning from the many talented people in the Hereford breed. He loves working with current and new Hawk Livestock customers of all ages. 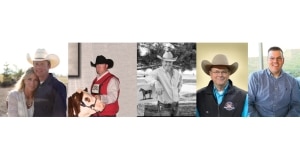 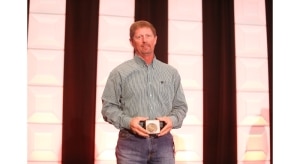 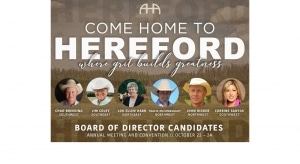