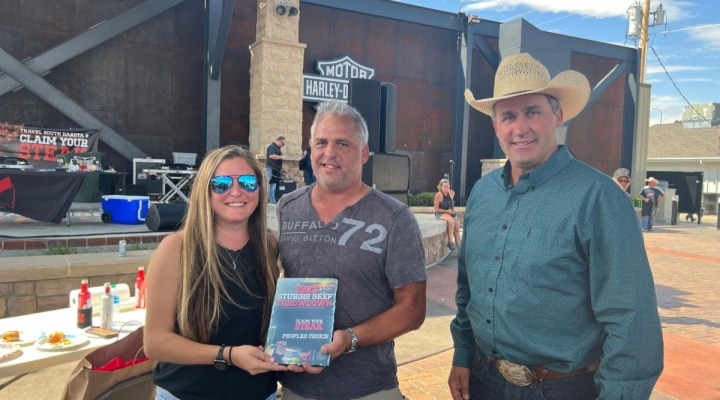 The Sturgis Beef Throwdown Burger Battle took place on the Harley Davidson Rally Stage in downtown Sturgis on August 12th. Sturgis VIP sponsors were paired with South Dakota Beef Farmers and Ranchers and Media Partners to battle for their chance to be the 2022 Beef Throwdown Burger Battle champions. SDBIC Celebrity Chef, Justin Warner, was onsite to host and judge this year’s Burger Battle, along with representatives from the top 3 Claim Your Steak restaurants.

Congratulations to all of this year’s Sturgis Beef Throwdown winners and thank you to everyone who had a part in selecting this year’s champions.

Learn more about SDBIC participation in this year’s 82nd Annual City of Sturgis Motorcycle Rally and throughout the year by following us on Facebook (@SDBeef).

For more information on Beef Checkoff and statewide efforts visit www.sdbeef.org and www.MyBeefCheckoff.com or contact Suzy Geppert at sgeppert@sdbeef.org.