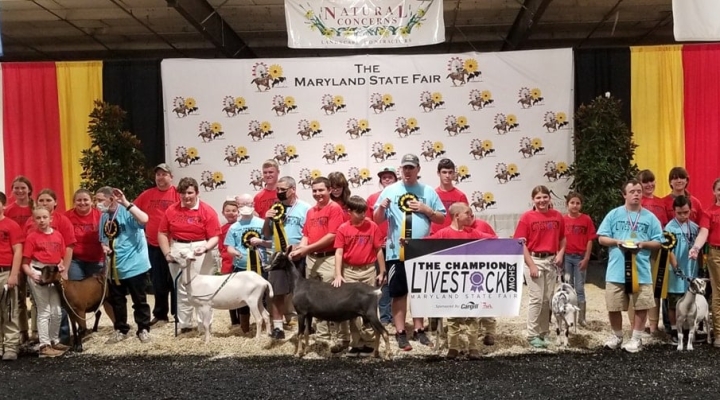 Prepare for the Fair was an appropriate theme for the 2022 Maryland State Fair as the Fair moved from its traditional 12 consecutive days to a three long weekend format. The three weekends opened on Thursday nights at 5 PM and on Fridays, Saturdays, Sundays, and Labor Day Monday at 9 AM.  The weather was almost perfect with a few days of high temperatures and scattered rain on closing day.  (photo by Maryland State Fair)

TIMONIUM, Md. — Prepare for the Fair was an appropriate theme for the 2022 Maryland State Fair as the Fair moved from its traditional 12 consecutive days to a three long weekend format. The three weekends opened on Thursday nights at 5 PM and on Fridays, Saturdays, Sundays, and Labor Day Monday at 9 AM.  The weather was almost perfect with a few days of high temperatures and scattered rain on closing day.

The new format and the great weather were integral components for the 16% increase in attendance, an increase in livestock exhibits, and an all-time gross income being reached by the Maryland State Fair Carnival Midway Operator Deggeller Attractions.

The decision to change to a long weekend format was precipitated by more Maryland school systems starting prior to Labor Day.  “The Maryland State Fair & Agricultural Society’s mission is agriculture education. We moved to this new format because we did not want the 4-H/FFA youth to have to chose between going to school and exhibiting at the Maryland State Fair,” said Maryland State Fair General Manager D. Andrew “Andy” Cashman.

4-H/FFA and Open Class youth and adults presented thousands of exhibits that educated the 588,120 fairgoers in attendance about the importance of agriculture. “It was encouraging to see families and individuals smile as they enjoyed the variety of fun and educational competitions and displays,” said Cashman.

The First Friday Food Drive presented by Chick-fil-A Baltimore raised 5.5 tons of non-perishable food items for the Maryland Food Bank. The food donations were collected from fairgoers in exchange for free admission to the Fair on the first Friday.

The first ever Maryland State Fair Longhorn Cattle Show was held in the Cow Palace with more than 50 entries.

The Maryland State Fair Champion Livestock Show provided the opportunity for youth and adults with special needs to learn about goats and with the assistance of 4-H/FFA youth had the opportunity to exhibit them in a show format. Participants received champion ribbons, medals, and Dairy Bar ice cream vouchers.

The New Fair Food Contest in the Maryland Foods Pavilion was won by Farmer Stan’s stand for the Garden Grilled Cheese, an open-face grilled cheese sandwich topped with fried green tomatoes and a fresh corn & peach salsa. Farmer Stan was presented with a trophy, a Grand Champion Ribbon, a $500 Gift Card from The Restaurant Store, and a crab feast for six employees.  The other Maryland Foods Pavilion vendors featured additional new entries at their stands. The most popular new Midway treat was the Pickle Pizza.

Many new vendors were featured in the Exhibition Hall of which the most popular were: Poppin’ Penelope Balloon Art, Pretty Bird Paradise, and the U.S. Army Super Truck. Traditional favorites returned including: the Caramel Kettle Popcorn Store that celebrated its 25th year at the Maryland State Fair, the Bulk Candy store, the Negro League Baseball exhibit, the Comptroller’s Unclaimed Property booth, and a variety of other Maryland state agencies, and much more.

The Maryland State Fair 4-H/FFA Youth Livestock Sale raised a record-setting $177,500 from Maryland businesses and individuals. 70 youth received the proceeds from the sale of their animal to invest for next year’s project or future educational endeavors. Through this project, the youth develop life skills including animal care, financial and management decisions.

The Undeniably Dairy Celebrity Milkshake Contest, hosted by the American Dairy Association North East, the Maryland Farm Bureau Young Farmers, and the Maryland State Fair, drew a crowd as media teams went milkshake to milkshake against each other:  The Undeniably Dairy Celebrity Milkshake ContestWinner was 100.7 The Bay’s Styx Twix Shake topped with Jimmies in memory of fellow reporter Traffic Jam Jimmy who won the contest in 2021