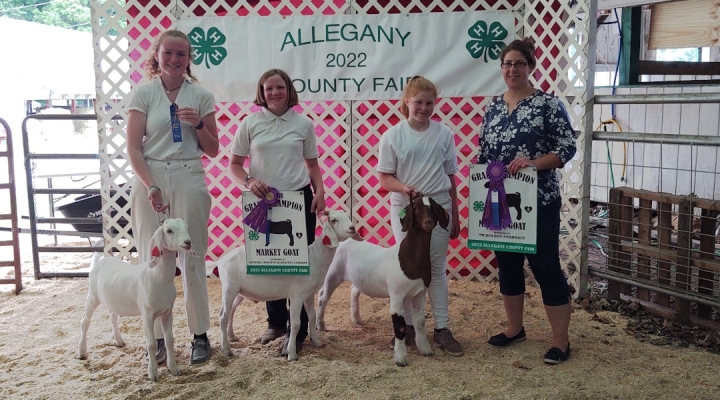 BELMONT, N.Y. — Monday, July 18th youth exhibitors showed off their swine projects at the Allegany County Fair. The contest is an opportunity to be rewarded for the months of hard work caring for and training their animals.

Three future 4-Hers participated in the Cloverbub showmanship open to youth between 5-7 years old. The judge complemented Tinsley Foster, Beverly Ploetz and Faith Wilson for an excellent job controlling their animals.

Grand Champion Market Swine receiving a banner In Memory of Sarah Beiler along with a wall plague from the NYS Pork Producers Association was exhibited by Sarah Wilson. The Reserve Grand Champion Market Swine sponsored by Alfred State College was awarded to Collin Wilson. All of these animals will be sold at the Annual Youth Market Animals Sale beginning at 6 PM on Wednesday, July 21st.

This year’s judge for the swine show was Brenden Kroll from Hamburg, NY. Owner of BGDK show pigs and herdsman at S&K Show pigs in Arlington, Ohio. He has been judging for 7 years, in 5 states. The youth were complimented on the high-quality projects shown and work each youth had clearly put in training their hogs for show.

Youth shows at the fair are one of many programs offered by the 4-H Program through Cornell Cooperative Extension of Allegany County (CCE-Allegany). The association is part of the national cooperative extension system, an educational partnership between County, State, and Federal governments. As New York’s land grant university Cornell administers the system in this state. For more information, call 525-268-7644 or visit our website at www.cce.cornell.edu/allegany. Cornell Cooperative Extension provides equal program and employment opportunities.

Increasing access to fresh local produce on Buffalo’s East Side