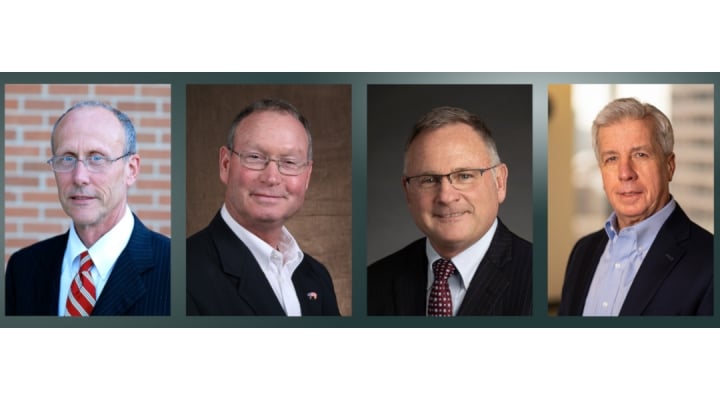 The Ohio Agricultural Council (OAC) will induct Monte Anderson of Wilmington, Randy Brown of Nevada, Tim Corcoran of Chillicothe, and Keith Stimpert of Worthington, into the Ohio Agricultural Hall of Fame. The 55th annual event normally attracts more than 600 guests to honor the four professionals for their lifetime of service and dedication to Ohio’s agriculture community.

“We are pleased to recognize this outstanding class of Hall of Fame inductees,” said Mike Bumgarner, president of the Ohio Agricultural Council and president and CEO of United Producers, Inc. “Though our 2021 inductees represent diverse elements of the agriculture industry, from education to associations to those who dedicate their lives on the farm, all inductees have demonstrated deep dedication to the lasting improvement of Ohio’s agriculture industry, through their leadership, mentorship and advocacy efforts.”

The following four inductees will join 237 prior recipients named since 1966 when the program was incepted.

After receiving his Ph.D. in Agricultural Education from The Ohio State University, Anderson began his career at Blackhawk Community College, where he was the Division Director for Agriculture. While serving in this role, Anderson developed and implemented a recruitment model that led to recruit and retain over 200 full-time students in the program. Anderson left Blackhawk to join Wilmington College in 1985 as an Assistant Professor in the Department of Agriculture, rising quickly through the ranks to received tenure in 1991 and full professor status in 1994.

Randy Brown – Nevada, Ohio
Passionate about promoting Ohio agriculture, Randy Brown has made a positive impact on the industry at the county, state and national levels. Upon receiving his degree in Business Administration from Ashland College in 1976, Randy envisioned beginning his career in business, and got his start at Wyandot Popcorn. However, his true passion and career aspirations resided on his family farm in Nevada, Ohio. In 1979, Brown joined his father and brother on their family farm, Maken Bacon Farm, and never looked back.

For 41 years, Brown has worked on his family’s farming operation, which includes a sow and farrow-to-finish swine operation, cattle, and 1,100 acres of cropland. Brown focuses his time on the swine operation, adapting to the ever-changing production methods in the swine industry – from raising pigs outdoors on dirt lots, to building modern, high-tech barns with controlled environments.

From the early stages of his professional career, Brown has served on numerous committees and boards within agriculture, including Ohio Pork Council President and board member, Ohio Livestock Coalition member, National Pork Board member and more. Brown is well-known for hosting personal farm tours for legislators and key leaders to educate about modern pork production, and advocating for the pork industry in Washington, D.C. through the National Pork Producers Council’s Legislative Seminar. With a strong career history on a family farm and dedication to advocacy, it is obvious that Randy’s passion for the Ohio pork industry – and Ohio’s agricultural community – is strong.

Tim Corcoran – Chillicothe, Ohio
Tim Corcoran, owner and partner of Corcoran Farms, has more than four decades of experience contributing to the betterment of Ohio agriculture and rural communities. He’s accomplished this through work on his farm, community service, Farm Bureau leadership and service as Chairman of the Board with America’s number one insurer of farms and ranches, Nationwide Insurance.

Corcoran’s strong leadership is matched with a humble personality and an innate sense of service. He is passionate about farming and recognizes the importance of helping others succeed in the industry. By lifting others up and recognizing their strengths, he has positively influenced current and future generations of Ohio farmers.

While serving as vice president of government affairs at Ohio Farm Bureau, Stimpert led the work for Ohio’s livestock producers as they faced challenges with facilities permitting, which ultimately led to the establishment of the livestock permitting program at the Ohio Department of Agriculture.

In 2009, Stimpert was part of the leadership team that helped to pass Issue 2 and the creation of the Ohio Livestock Care Standards Board, which is still functioning today. The livestock care standards board created a national model for addressing livestock care and avoiding costly ballot initiatives. Stimpert retired from Ohio Farm Bureau in 2020, but his legacy in Ohio’s agriculture industry is evident, manifesting through lasting legislation, association policies and statewide programs that continue to impact the industry today.