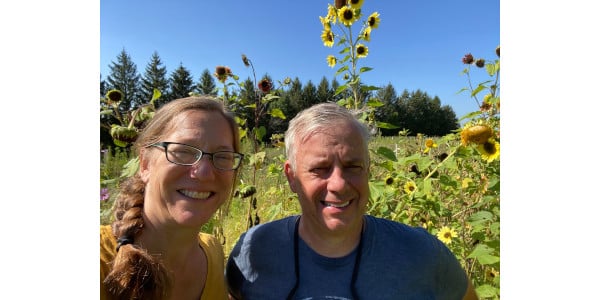 Rose and Mike Roelf. (Courtesy of Practical Farmers of Iowa)

AMES, Iowa — When Rose and Mike Roelf purchased 45 acres of farmland from Rose’s mother in 2014, they had a vision: to repair the land, rebuild the soil, address food insecurity and create land access for a new generation of community-conscious farmers.

Today, their land represents the budding of that vision. Located near Iowa City, Iowa, the farmland currently hosts two beginning farm businesses – Rainbow Roots Farm, a certified organic farm operated by Corbin Scholtz, and Radical Patch Farm, a cooperative operated by Joe Klingelhutz, Ilsa Dewald and Will Kresse – that are raising food for the local community.

The farm also has an extensive conservation plan; boasts an abundance of wildlife – and is serving as a model for how farmland owners can use their land to build a more diverse, sustainable and inclusive farm landscape in Iowa.

The couple’s commitment to land access, conservation and long-term sustainability – as well as the thoughtful planning Rose and Mike have engaged in to guide their decision-making – led to their selection by PFI’s board of directors as the 2021 recipients of the Farmland Owner Legacy Award.

The award is granted annually by PFI to landowners who use their land to help the next generation get started, advance land stewardship and promote long-term sustainability of farm businesses, environmental quality and rural communities. The award also highlights the important role non-operator farmland owners can play in the future success of sustainable agriculture.

An award ceremony was originally planned for Saturday, Sept. 25 – but due to concerns about the spread of the coronavirus Delta variant, that event has been canceled.

“I’ve always been interested in food quality, growing food for people and preserving family farms,” Rose says. “The health of people and animals is really important.”

“We’re also really concerned about food insecurity,” Mike says. “It is shocking how many people can’t afford the school lunch bill for their children. How can we live here in Iowa and people have those struggles?”

The seeds of the Roelfs’ interest in land and community stewardship are rooted in a mix of personal farm and local food experiences, a concern for the environment and a growing awareness in adulthood about food access and the importance of supporting local food farmers.

Rose’s parents both grew up near Sibley, Iowa, about 10 miles from the Minnesota border in the northwest part of the state. Her dad, Marty, a plastics engineer, grew up on a farm. His career took him out of Iowa and Rose was born in Delaware, but she and her family moved back to Iowa when she was four years old.

In the late1960s, Rose’s parents purchased a farm outside Iowa City, and in 1971, when Rose was 6, the family moved onto the farm – the same land where Rose and Mike now live.

Growing up, Rose often helped with livestock-related chores on the neighbors’ farms. Her mom, Shirley, also kept a big garden. “I always liked the ‘food for humans’ side of production,” she says. “I was always out with my mom in the garden, and helped with canning, making jam, things like that.”

Mike’s family also had farm connections. His mother grew up on a farm near Clarence, Iowa, where his grandfather raised corn, soybeans and hogs, and where Mike spent weekends as a kid. His paternal grandfather was a farmer and cattle broker who ran a stockyard in Clarence. “My parents moved to Iowa City for education purposes and never left,” Mike says. “I lived in town, but my mom had a giant garden and canned.”

The couple met while in high school in Iowa City and later moved to Tempe, Arizona. In 1991, the Roelfs returned to Iowa to pursue their careers and raise their family. They knew they wanted to move out of the city at some point, and in 2014, Rose says the timing was right to explore the possibility of purchasing part of her family farmland.

“Mom was in Houston at the time,” she says, “and we wondered if she would be interested in selling to us.” Rose’s mother traveled to Iowa in the summer of 2014 to work on the transition process, and stayed for a few weeks to ensure it went smoothly. Rose and Mike purchased the land at market value and, Rose says, “made sure it was a fair transaction so my mom was fairly compensated.”

Months before starting the formal transition process, however, as they were imagining how they might use the land, Rose and Mike spent significant time researching their options, connecting with local farms – and even gaining first-hand farming experience.

It was during this exploratory phase that Rose and Mike first formally connected with Practical Farmers of Iowa. The couple attended their first PFI annual conference in January 2014, where they signed up for the Holistic Management short course.

“That was really impactful because it made us think about what our goals are, and the driving principles we’re going to measure those goals against,” Rose says. “Thinking about all those things before purchasing the land was important.”

As part of their research, the couple visited other farms in the area, and in 2014 Rose participated in PFI’s Labor4Learning program, working with Susan Jutz, who hadn’t yet retired from her long career operating ZJ Farm near Solon, Iowa. “I was the world’s oldest intern,” Rose quips.

Rose and Mike also knew PFI member Dick Schwab. At the time, Dick was leasing some of his land near Solon to Kate Edwards, who had started Wild Woods Farm on the property. Rose and Mike arranged to volunteer with Kate several times.

Once the farmland transition was complete, the Roelfs didn’t waste any time putting their vision for the land into action. “We closed on the farm in August, and before the beans were harvested, we had oats flown on,” Rose says. “We wanted to start right away with cover cropping and rebuilding the soil. Those are some really early lessons we picked up from participating in PFI.”

In the summer of 2015, Rose and Mike took the next big steps towards fulfilling their farmland goals. Kate was losing her lease and approached them about moving Wild Woods Farm to their land. A key challenge, though, was the lack of infrastructure on the Roelfs’ land – the Roelfs hadn’t even built their house yet.

The trio addressed the situation with a thoughtful lease agreement that took into account land access and financial considerations, as well as the Roelfs’ conservation goals. Because short-term leases are a common land access barrier, they set up a five-year lease, with a provision that Kate could exit early if she found another farm opportunity.

The Roelfs also designed the lease so Kate would own and build equity in the barn, which included an apartment for her to live in – and it stated that Rose and Mike would purchase the barn from Kate when she left. Finally, the lease contained a conservation plan and agreements for using cover crops, eliminating non-organic pesticides and practicing crop rotation.

Thinking through the best way to handle infrastructure costs and ownership was also part of the process. Kate helped Rose and Mike determine the best placement for the irrigation and buildings, and the infrastructure eventually came to include, in addition to the barn, a walk-in cooler, germination house, packing shed, equipment storage area and irrigation.

“Mike and I put in and owned all of the irrigation. Kate built the barn and added the cooler,” Rose says. “She also put up the germination house and sold it to Corbin when she moved. So we all own a bit of the infrastructure.”

Kate stayed for four years, until an opportunity came up to purchase her own farm in 2019. But she helped Rose and Mike connect with Corbin Scholz, who moved her year-old operation, Rainbow Roots Farm, to the Roelfs’ land in 2020 at the start of the pandemic.

Because she was farming at a smaller scale than Kate, Rose and Mike offered some of that space to a second beginning farm business – Radical Patch Farm, the cooperative run by farm partners Joe Klingelhutz, Ilsa Dewald and Will Kresse. They rent about 1 acre from the Roelfs and have access to the irrigation and a section of the barn to use for packing or storing materials.

With all the farmers they’ve worked with so far, the Roelfs have invested considerable time crafting custom leases that work for all parties. Part of that process has involved engaging in meaningful dialogue with the farmers, listening to their concerns and ideas and being open about everyone’s expectations.

“All those farmers came from previous leases and arrangements, so they brought a lot of what did and didn’t work for them and could express those things to us,” Mike says. “And we had experience with what we thought works and doesn’t work. Land access is a big deal – all of those farmers had to leave where they had been farming.”

“We found this process fostered really good conversations,” Rose adds. “There were differences in our leases with Kate and Corbin because they had different needs.”

Leasing land to these beginning farmers also directly links with the Roelfs’ goal of addressing food insecurity. Both Kate and Corbin donate food to the local food pantries, Rose says. “Corbin also donates to some organizations in Cedar Rapids to stock the community refrigerators with fresh food. That’s really important to us.”

For her part, Corbin – who nominated Rose and Mike for the Farmland Owner Legacy Award – says she has not only managed to survive as a beginning farmer thanks to the Roelfs, she has been able to grow her business.

“I’m in my second year farming Rose’s land and have already doubled my production,” Corbin says. “Without this opportunity, I would have stopped farming at the end of 2019. This feels like a private incubator setting, and I am so lucky to be involved.”

The Roelfs see their role similarly – as non-operator landowners who are providing access to land, infrastructure, markets and a chance for beginning farms to grow and thrive. They advise other landowners to recognize the next generation’s immense work ethic, trust their knowledge and abilities, and realize how even a small piece of land can have an outsize impact on land and food access.

“Rad Patch Farm sells 10 CSA shares, plus their own – that’s 13 families they’re providing vegetables for on 1 acre of land,” Rose says. “And farmers who have 1 acre can help younger farmers get started with that small of a plot.”

“Our model of helping young farmers could work elsewhere,” Mike adds. “It doesn’t have to be within a mile of a city. What we’re doing is giving them access. We’re taking people who have been relatively successful at growing things and giving them a leg up and a chance to make it a lifetime career.”

Women in Ag Leadership Conference to be held in Ames
October 26, 2021