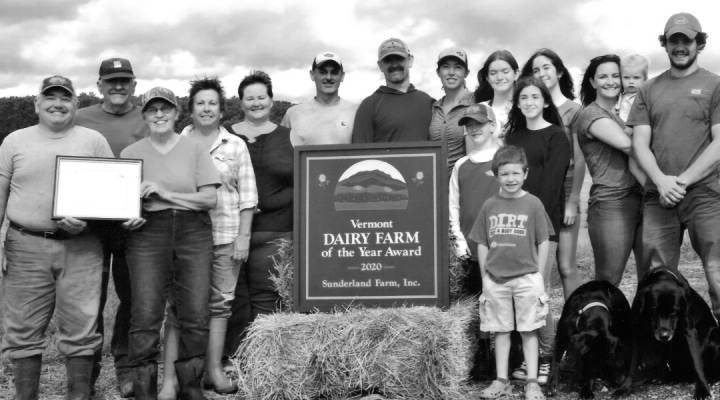 Outstanding farm management always takes the spotlight, and the changes and challenges faced in 2020 can’t deter such attention to detail and excellence in agricultural production.

Since 1947, the New England Green Pastures Award program has recognized dedicated farmers, farm families and agri-business leaders. It has evolved from its original objective of promoting pastures and forage management to the present format of honoring an outstanding dairy family from each of the New England states. These programs are recognized for total farm management, both production and financial, considering each farm family’s contribution to the agricultural community.

Green Pastures nominees meet the following criteria: Farm must be operated by a full-time farmers; have a quality dairy herd in relation to milk production, breeding and animal health; be run efficiently; have a well-established, balanced forage and feeding program; operate in an economically sound way; exhibit leadership and contribution to the immediate and extended community; exhibit acts of environmental improvement through management or appearance.

This year’s honorees were announced virtually on September 18 via Zoom call, rather than the customary banquet during The Big E. They’ll be honored at the state level, and at a special awards banquet at the next Eastern States Exposition in 2021.

Although sixth-generation Sunderland Farm can trace its beginnings back to the mid-19th century when thousands of Merino sheep grazed its pastureland, the dairy farm has never stopped moving forward. The farmers are quick to adopt new technology, including robotic milkers, to make their operation more efficient and cost-effective. Their attention to detail when it comes to their cows is evident by their exceptional milk quality, high-quality forages, and ongoing measures to improve cow comfort.

Principal owners of the 450-head Holstein operation are brothers Harold and Larry Sunderland and their nephew, Bob Sunderland. Other family members who work on the farm include Larry’s twin sister, Linda Forbes, who does seasonal fieldwork, operating the mower and hauling wagons; Harold’s wife, Margaret, the farm bookkeeper who also helps clean the robotics barn; and Bob’s wife, Nancy, who drives tractor during harvest season. Herdsman Steve Norris is a 12-year employee who oversees the robotics and cows in the barn. Bryan Ashley-Selleck runs the equipment and cleans the heifer and dry cow barn.

They ship their milk to the Dairy Farmers of America Cooperative in St. Albans; rolling herd average is 27,000 pounds, with 4% butterfat and 3.1% protein.

They are committed to being good stewards of their land and willing to adopt new conservation practices. The farmers plant no-till and low-till corn and seed winter rye as a fall cover crop in their cornfields, practices that not only improve soil health, and prevent nutrient run-off into waterways but help them reduce their fertilizer costs. They also have an arrangement with their town’s recycling center to shred cardboard and paper, which is mixed with chopped hay and sawdust as bedding for young stock. 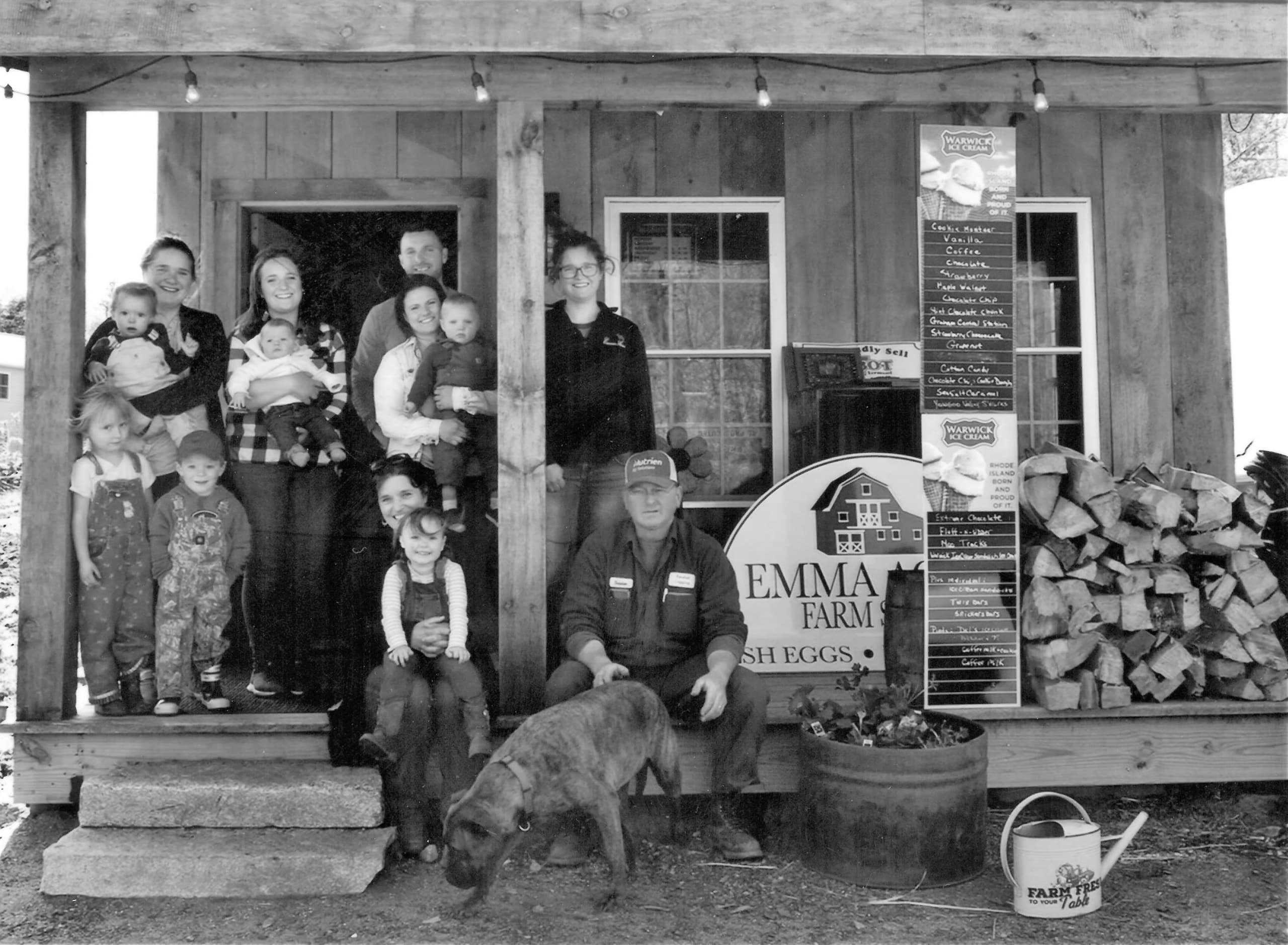 Back in 1990, Cynthia and Scooter LaPrise bought their EMMA Acres farm in Exeter to establish a beef operation. The couple’s four children – the farm name comes from their initials (Elizabeth, Matt, Maggie and Alexandra) — had other ideas.

“We started as a beef farm, but the kids, well, they didn’t like giving up the herd after they were raised,” recalls Scooter. By 2002, the family had decided to start dairying, the LaPrise children started showing cows at local fairs, and in 2008, the farm shipped its first load of milk.

Scooter will tell you there aren’t many dairy farms in the Ocean State these days, but EMMA Acres is a thriving operation. They manage a milking herd of 32 Jerseys, which produce a richer milk, higher in butter fat. EMMA Acres ships milk to the Cabot Cooperative Creamery and also to Rhody Fresh, the Rhode Island dairy cooperative.

In the fall of 2019 the family opened a diversified farmstand where local families can find Rhody Fresh milk, eggs, meat, a variety of Cabot products and crafts from local artisans.

Farm management is a family affair. Cynthia grew up at Bailey Farm in East Greenwich and was involved in 4-H; Scooter was a member and former state president of the Future Farmers of America (FFA) Association. The LaPrise children are also active in the farming community: Elizabeth, is a former FFA state president and works as a nurse at a local hospital; Matthew works in the wood and logging industry; Alexandra, also a former FFA state officer, helps assist around the farm on the weekends as she works full time at a locally run IT business during the week. Maggie runs the farm and farmstand during the week on top of working towards her diploma from Penn State’s online program in agriBusiness. In addition to farm duties, Cynthia works as a nurse at a local hospital, and Scooter runs Kendall Logging and Trucking.

2020’s accolade follows a previous Green Pasture recognition in 2016. The LaPrise family’s hard work and dedication has paid off once again! 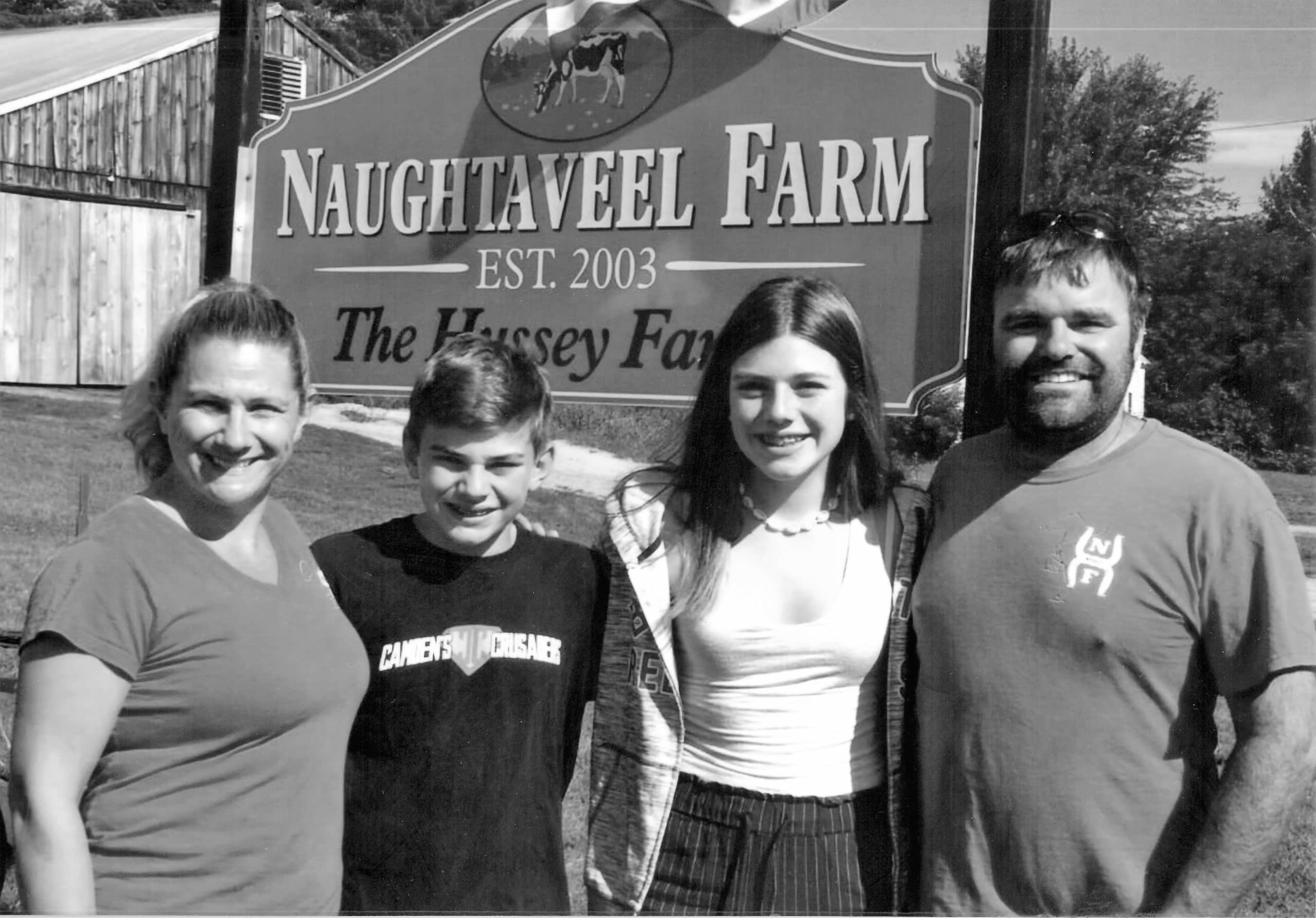 Justin and Julie Hussey operate Naughtaveel Farm, a life-long dream that started when they dated as students at the University of New Hampshire. Both were in the dairy program and wanted to ultimately marry and farm on their own. After graduation in 2001, Julie went to work with her brother, Mike Tanguay, in Vermont. Justin began working for Northeast Agricultural Sales in Lyndonville, VT, and he became a certified pesticide spray applicator, but when a custom heifer raiser closed, they started raising heifers at one of Justin’s grandfather’s farms in North Conway. They began with 13 calves and 20 acres in 2003.

In 2007, Al Sherman of East Conway approached them about buying his herd. Julie had the bright idea of buying the cows and renting the facilities, and they all agreed. The arrangement continued for six years, and then Justin’s grandfather’s farm became available for purchase in 2013. They cleaned things up, added free-stalls, and reconditioned the milking parlor.

The Husseys work as a team and hire three employees. They raise 250 acres of corn and 250 acres of hay crop. Animal care and comfort is at the top of their list, and Justin also focuses on raising quality crops with an emphasis on environmental preservation and following best management practices.

In addition to the dairy operation, the Husseys have 19 Percheron show horses and actively show at fairs around the country, from Maine to Colorado. In 2016 they were 6-horse hitch National Champions at the Indiana State Fair, and their children, Allie and Sawyer, drive as well and enjoy the friendships they develop around the country. They keep a few mares and raise a couple of colts each year.

Being the only dairy farm in the area, Naughtaveel Farm does a lot of agricultural education, and they enjoy teaching local children about what happens on their family’s farm and are respected as a valuable resource to the community. 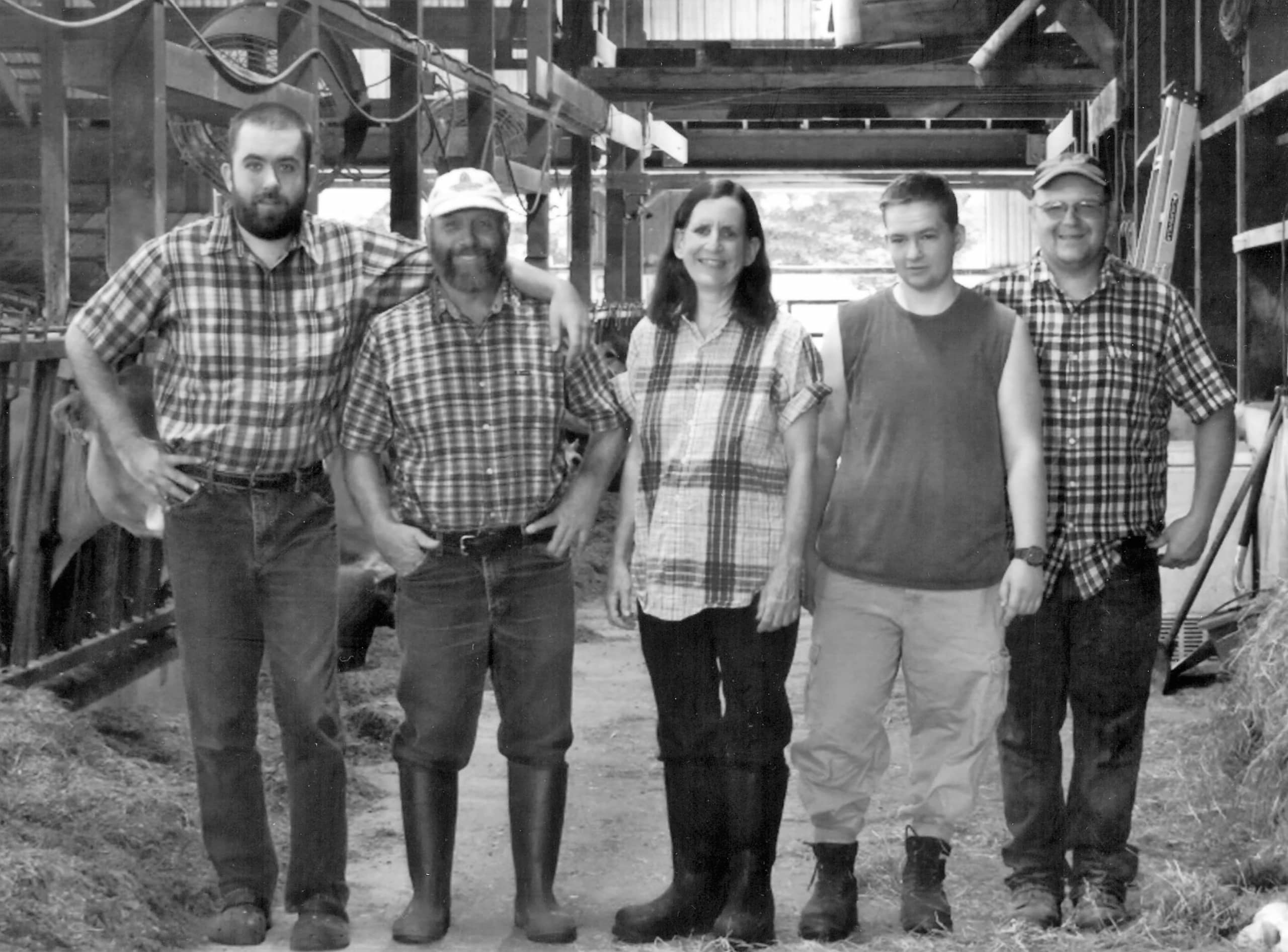 The Lowell Family Farm is a perfect example of how no two dairy farms are alike. Each operates based on a number of factors – interests and skill sets of the farmers and employees, available land and facilities, agricultural philosophies, even the chosen breed of cattle for that farm, to name a few.

“It didn’t take us long to see that we wanted to focus on cow comfort and quality forage,” said Dana Lowell, who started dairy farming with his wife Seri in 2007. “It’s a synergy that translates into high-component milk and efficient cows.”

The Lowells are doing it their way on farmland in Buckfield that has been in his family since the 1950s and has gone through several different agricultural uses. Dana and Seri moved their dairy operation there in 2010. They breed selectively for smaller Jerseys; they have milked as many as 100 cows, but found that keeping at about 50 head was optimal for their labor force.

Like an increasing number of farmers, the Lowells have adopted no-till methods to grow their corn, meaning they do not turn up the earth each year to plant their corn but use a corn planter that disturbs a minimal amount of soil. They also plant a cover crop after harvesting their fields to protect them from nutrient loss and to add nutrients to the soil.

They give a great deal of credit for their success to those who provide their services to the farm regularly – their veterinarian, the cow nutritionist, their breeder and their Dairy Herd Improvement (DHIA) technician. Lowell Family Farm belongs to the Agri-Mark Cooperative, which owns Cabot Cheese; their milk is trucked to the H.P. Hood plant in Portland and bottled. 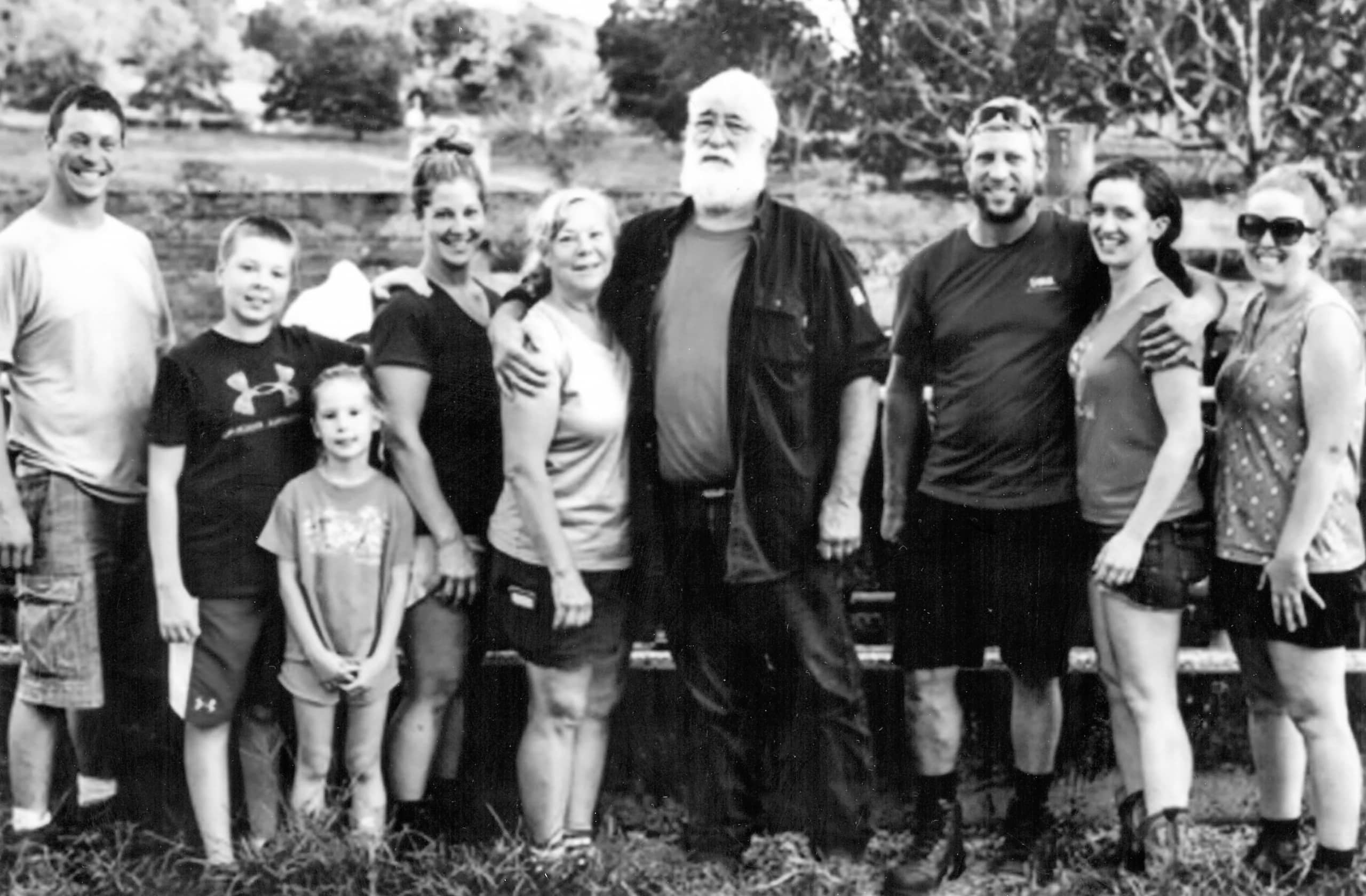 Ben and Tim Learned, owners of Valley View Farm, have unique achievement of establishing a very successful new dairy farm in only 10 years. The brothers both worked for area dairy farms as they were growing up. Their passion for farming and dairy cattle became even clearer as they attended college and the brothers decided that dairy farming would be their vocation. The brothers, together with their parents, Edward and Belinda, purchased a 130-acre unoccupied dairy farm 10 years ago in the beautiful rolling hills of North Stonington, Connecticut.

They started with 8 purchased cows and developed the herd through internal growth and strategic purchases to the current 120-head herd. They are fed 100% BMR corn silage and round bale haylage produced on the farm and rented land, and rations are completed with purchased concentrates. They milk in a flat parlor that they designed and built for cow comfort and flow, as well as labor efficiency. A recently completed barn renovation converted a tie-stall part of the facility to a sand-bedded free-stall.

The primarily Holstein herd is high producing with high levels of protein. In addition, The Learneds have received awards from their dairy cooperative, Dairy Farmers of America, for achieving and maintaining high quality milk.

Tim and Ben enjoy working together in all aspects of the farm, and they genuinely believe that having fun should be a component of dairy farming. It is truly a family farm with help from family members. Ben’s wife, Catherine, helps out on weekends and before her full-time job as a physical therapist, as does Catherine’s sister, Liz, and Ben and Tim’s sister, Marcia. In addition, they open their farm to students from the University of Rhode Island so that students can gain hands-on education on dairy farming. Along with their mother, they also have a grass-fed beef operation that yields 24 steers per year.

Together, the Learneds have built a dairy farm that is an excellent representation of the viability and sustainability of the New England dairy industry and gives confidence for the future.