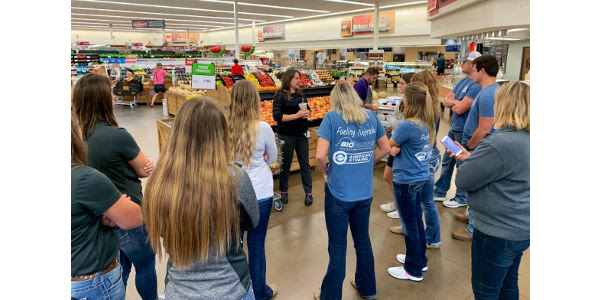 The 2019 class of the Corn and Soy Ambassador Program participate in a grocery store tour with their Dairy Ambassador counterparts. (Courtesy of NCGA)

LINCOLN — The Nebraska Corn Growers Association and the Nebraska Soybean Association are pleased to announce that applications are now open for the 2020 Corn and Soy Ambassador Program. The Corn and Soy Ambassador Program is a yearlong program for college students who are interested in learning more about the industry and becoming better advocates for agriculture. Each year up to 10 students are selected to participate in the program.

Throughout the year, students will take part in three seminars and a summer tour. The first meeting covers state and federal policies affecting the corn and soybean industries. The second meeting will focus on the role of checkoff programs in promoting corn and soybeans. The final meeting gives the students a glimpse of advocacy and leadership opportunities after they graduate. Meetings will take place in the Lincoln, NE area. The summer agribusiness industry tour will include different areas of the industry including, manufacturing, production, and processing. These stops will hopefully give students more insight into potential jobs and internships in the industry.

During the program, students are also asked to spend time to promoting the state’s corn and soybean grower associations and checkoffs at promotional events such as Husker Harvest Day and Soybean Management Field Days. Following the completion of the program students will be recognized at the annual meetings of the corn and soybean associations, and each will be presented a $500 scholarship to help them with school expenses. Funding for portions of the program is provided by the Nebraska Corn Board and Nebraska Soybean Board.

“The Corn and Soy Ambassador Program is a great way for college students to get an introduction to the agricultural industry. Past ambassadors have gone on to internships and jobs from connections made during this program. It is important to the association that we support programs like this,” said Kelly Brunkhorst, Executive Director of the Nebraska Corn Growers Association (NeCGA).

Applications for the Corn and Soy Ambassador Program can be found on the Nebraska Corn Growers Association website, necga.org. Nebraska Corn will also have applications on hand at the Career Fair on Tuesday, September 24th at Pinnacle Bank Arena.