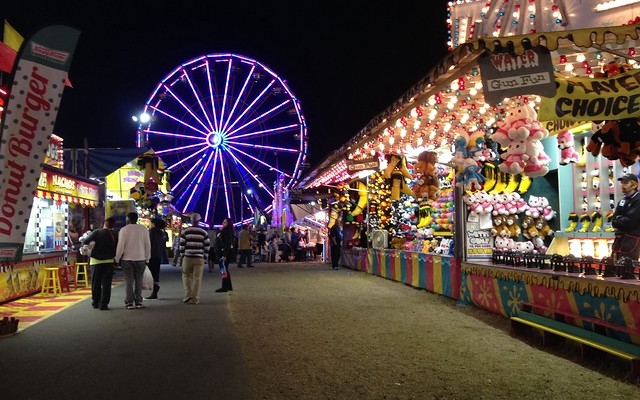 The N.C. State Fair freshens up its 2019 entertainment lineup with the addition of eight new grounds entertainers, five new rides, and a total of 117 concerts by established and emerging musical acts with North Carolina ties. (photo by Kevin Oliver, creative commons/flickr.com)

RALEIGH, N.C. – The N.C. State Fair freshens up its 2019 entertainment lineup with the addition of eight new grounds entertainers, five new rides, and a total of 117 concerts by established and emerging musical acts with North Carolina ties.

Among the new rides is the State Fair SkyGazer, a 155-foot-tall Ferris wheel with 15-mile sight lines, the tallest ride ever brought to the N.C. State Fair.

“We know fairgoers love the classics like racing pigs and lumberjack shows, but we also want to bring in a mix of new acts to continue to wow fair visitors,” said fair manager Kent Yelverton. “The SkyGazer literally raises the expectation level and we can’t wait to see the wheel go up on the grounds. It’s the tallest traveling Ferris wheel in the United States and when assembled, it will tower 62 and half feet above Dorton Arena.”

The ride will hold 216 people in 36 closed gondolas and will last about 10 minutes. It features over half a million individual LED lights and six miles of electrical wiring.

A separate ticket will be required to ride the SkyGazer. They are $6 in advance or $7 at the fair. Other new rides coming include a new Alien Abduction ride, SkyHawk, Sizzler and Dream Wheel.

The Our State Public House will add North Carolina made craft sodas to its offerings. Prior to the fair, you can purchase a Kegs, Corks and Pop pass for $12 to $17, which includes admission, plus a beer, wine or craft soda sample.

A one-man band, aerialist and acrobats, lumberjacks, stiltwalkers, a parrot-riding pirate, a giraffe and her zookeeper, a musical carillon and a street drum corps are among the new free grounds acts.

Uptick seen in rare virus in some US states