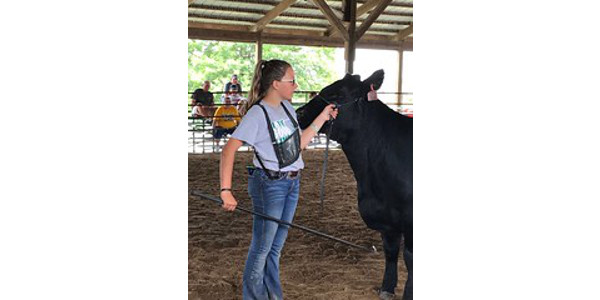 AMES, Iowa — Sixteen years ago, Brynn Nickle was a newborn with pneumonia. Today, she is a high school student from Clearfield who has been showing cattle for 7 years.

Brynn was transferred from the Creston hospital, where she was born, directly to Blank Children’s Hospital. She spent a week in the NICU recovering, and during that time, her parents stayed at the Ronald McDonald House of Des Moines. “It was a very comforting place to be during a scary time,” for her parents, Nathan and Stasia Nickle.

Brynn is one of 25 young Iowans who will show a steer in the annual Governor’s Charity Steer Show at the Iowa State Fair. The 2019 event will mark the 37th consecutive year the beef industry has raised funds to help families who utilize the Ronald McDonald House Charities of Iowa.

The show ring competition takes place Saturday, Aug. 10, at 4:00 p.m., in the Pioneer Livestock Pavilion at the Iowa State Fair. Celebrities will accompany the young steer owners, leading cattle around the ring while vying for the championship designation, showmanship honors, and the People’s Choice award.

Immediately following the competition, the steers will be sold at auction with proceeds going to the Ronald McDonald House Charities of Iowa. Both the show ring event and the auction are open to the general public.

Since the Iowa Beef Industry Council and the Iowa Cattlemen’s Association began the Governor’s Charity Steer Show in 1983, the effort has raised more than $3.5 million for the Des Moines, Iowa City and Sioux City Ronald McDonald House Charities. The houses provide a “home away from home” for families of seriously ill children being treated in area hospitals and have served nearly 47,000 families.

Each of the 25 steers are owned by Iowa youth who have cared for the animals and participated in other shows with them. The youth prepare the animals for the show and assist a celebrity in the show ring. Sponsors reimburse the youth for the cost of the animal and choose the celebrity.

Youth participating in the 2019 Governor’s Charity Steer Show will also learn additional information about the beef industry on Thursday, and volunteer some time with the Ronald McDonald House Charities in Des Moines on Friday, Aug. 9.

Can’t make it to the show? Watch for coverage of the event from our media partners. WHO’s The Big Show will once again broadcast live before and after the competition. Ag News Daily and Iowa AgNet (Iowa Agribusiness Radio) will be covering the event as well, broadcasting live on the GCSS facebook page: https://www.facebook.com/iowagcss/

A new website has been created to raise the awareness and impact of the Governor’s Charity Steer Show. Iowans interested in helping with the cause can donate online at www.iowagovernorscharitysteershow.com and support the efforts of the beef industry.

Participants:
Participants in this 37th anniversary event include Governor Kim Reynolds, who will host the show. Bryan Thill, Pleasantville, will serve as the official steer show judge for this year’s event and Bubba Chapman of Tipton has been selected to serve as the event’s Showmanship Judge.

Emcees for the event include Bob Quinn and Andy Peterson of WHO/WMT Radio and Michelle Rook of WNAX Radio. The auctioneers are Phil Schooley of Bloomfield, Will Epperly of Dunlap, Russele Sleep of Bedford, and Jared Miller of Leon. Catching bids in the ring are Tom Rooney of The Midwest Marketer; Mike Sorensen and Austin Brandt of Livestock Plus; and Jason Lekin from Tama Livestock Auction.