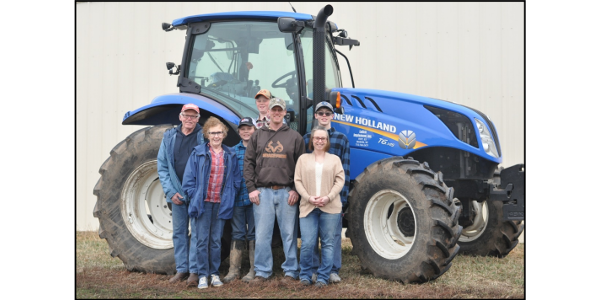 The active farmers in the Gustafson family are pictured above from left include: Roger & Sue Gustafson, Alex Nelson, Evan, Scott, Amanda, & Brooks Gustafson. (Courtesy of University of Minnesota Extension)

CLOQUET, Minn. — The Gustafson farm started 115 years ago as a registered Guernsey dairy farm. In the early days, they milked the Guernseys and hauled their cream to Mahtowa with horses. Many generations have operated the farm, and currently the fifth generation is growing up on the farm.

The Gustafson farm has changed with the times, as five years ago they sold the dairy cattle and are converting to a beef cow herd. They also raise corn for silage, alfalfa, and small grains of oat and barley. They sell hay to others for feeding their beef cattle and horses.

Scott also operates a livestock hauling business. Scott and his wife Amanda, along with their sons Evan and Brooks, their nephew Alex Nelson, and Scott’s parents, Roger and Sue Gustafson, are the family members primarily involved in the operation of the farm. Scott is grateful for the three generations that work together to make the farm function. He is also grateful that his children and nephew get the opportunity to work so closely with their grandfather, as he did with his grandfather.

In addition to running the family farm, Scott and Amanda are involved in Barnum school sports, maple tree tapping, and gardening. Scott also transports 4-H livestock to the State Fair each year. Amanda is also a Title 1 teacher.

Sue worked as a registered nurse for many years, has supported farm operations and family in many ways and also maintains beautiful perennial flower beds and a raspberry patch on the farm. Roger has been very involved in the Farm Service Agency Board, the Carlton County Fair Board for approximately 48 years (serving for at least 20 of those years as treasurer), the Dairy Herd Improvement Association, AMPI conventions, the Dairy Promotion Board, the Registered Guernsey Association, and the Moose Lake Co-op Board among other things. Roger has showed cattle at the county fair for at least 60 years.

The Gustafsons were recognized at Farmfest near Redwood Falls on August 8. Additionally a local open house will be held for the family at the Carlton County Fair in the 4-H building on Saturday, August 17 from 1 p.m. to 2:30 p.m. to thank them for all of their hard work and contributions to the community.

recognition Farm Family of the Year